The owner of doomed alpaca Geronimo says she is so confident the animal is not infected with bovine TB she has vowed to ‘kill him myself’ if he fails one final test.

Helen Macdonald, 50, is locked in a battle to save the eight-year-old stud following a £50,000 High Court battle, which ended in a warrant for the animal to be euthanised.

Black-furred Geronimo, from New Zealand but now living in south Gloucestershire, was condemned to death after twice testing positive for bovine tuberculosis (bTB).

But Miss Macdonald claims the tests were flawed and is begging the Government to give her beloved pet one last chance to live.

Speaking from her farm in Wickar Saturday, she said: ‘All I am asking is for Geronimo to be given a valid test.

‘If it comes back positive then I would not stand in their way. 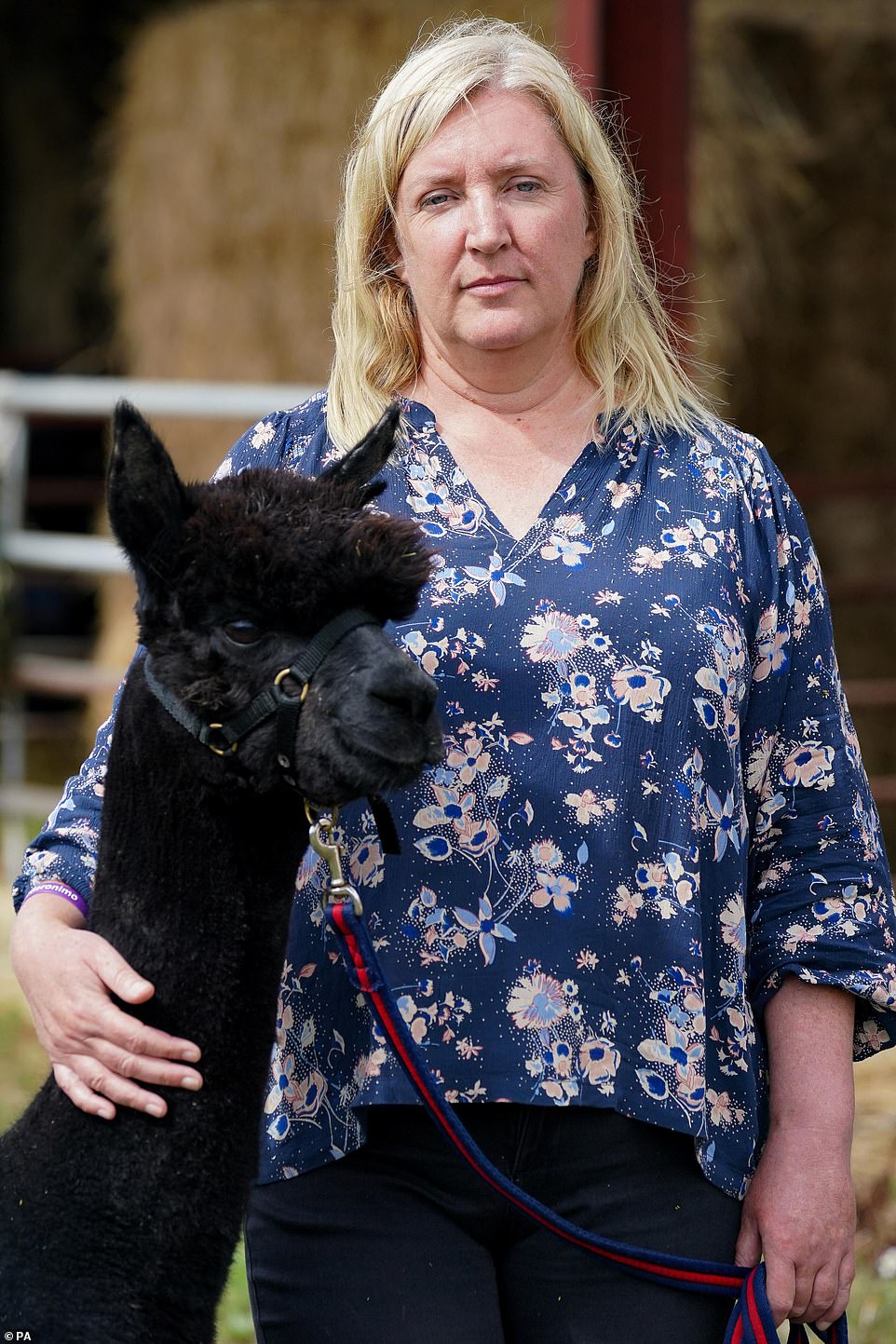 Helen Macdonald, 50, is locked in a battle to save her eight-year-old stud (pictured together) following a £50,000 High Court battle, which ended in a warrant for the animal to be euthanised

‘In fact, if he was given a valid test which proved he actually had the disease then I would kill him myself.

‘Geronimo has never tested positive for bTB. He had anti-bodies after taking the vaccine tuberculin which is exactly what you would expect to happen.

‘The science was dodgy. The Government do not want to admit that they have to investigate why alpaca’s react differently to tuberculin.

‘It is more convenient for them to stand by a test which only proved he had anti-bodies to the disease.

‘If he had been infected with TB in 2017 then he would be dead by now. It’s a horrible disease and animals only last a few months when they are infected.

‘Why should I let them [the Government] kill a perfectly healthy animal?

‘All we are asking is for the Government to think again. They don’t have to activate the warrant.

‘There is another way to solve this.’

Miss Macdonald said she would do ‘everything in her power’ to stop Geronimo from being put down.

She added: ‘All I can say is that I will not break the law but I will do whatever I can to stop a healthy animal being killed.’

It comes after the owner was assured Geronimo would survive the weekend after the firing squad was called off for at least 48 hours.

Two officers from Gloucestershire Police arrived without warning for a stand off at the farm gate in Wickwar, Gloucs., on Friday evening, as they reportedly explained how Geronimo would be humanely killed.

The pair were pictured speaking to a tearful Miss MacDonald, who earlier promised to ‘stand in the way of any gunman who comes to destroy Geronimo’.

Those in attendance watched on in trepidation, with the owner fearing the worst.

But, the Sun reports the firing squad was ‘called off for 48 hours’, as the cherished animal appears to have been granted a last-minute reprieve.

Animal rights activists are set to march on Downing Street this weekend to demand the beloved stud is kept alive, as celebrity supporters Chris Packham and Joanna Lumley waded into the row to offer their support.

And more than 85,000 people have so far signed a petition to save Geronimo after his owner Miss Macdonald lost a four-year court battle to stop his death. 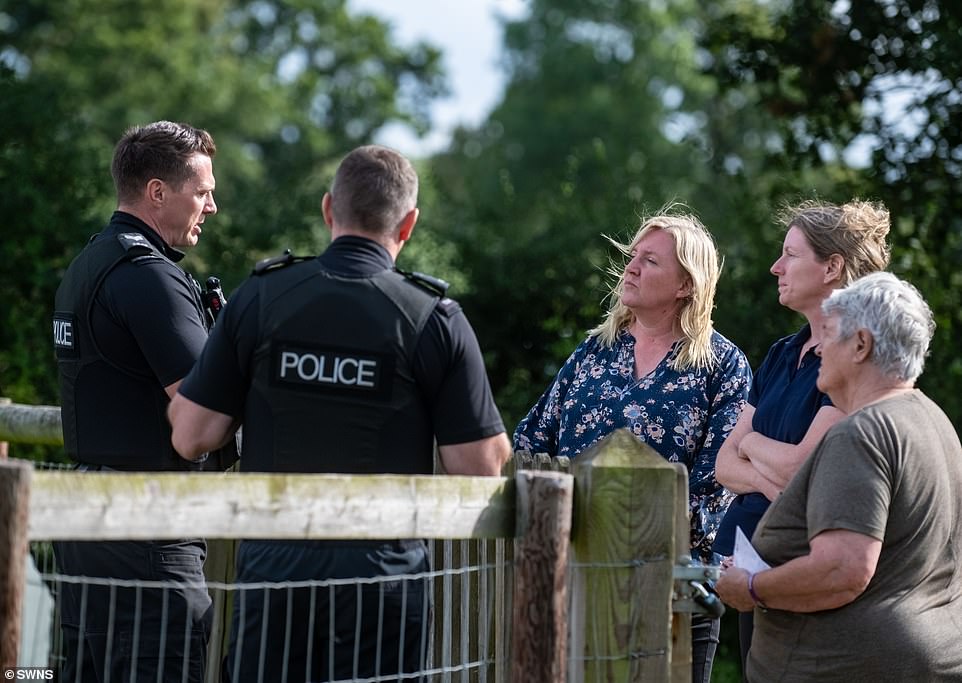 Gloucestershire Police officers have arrived at the property in Wickwar, Gloucestershire that houses beloved alpaca Geronimo, who has been condemned to death 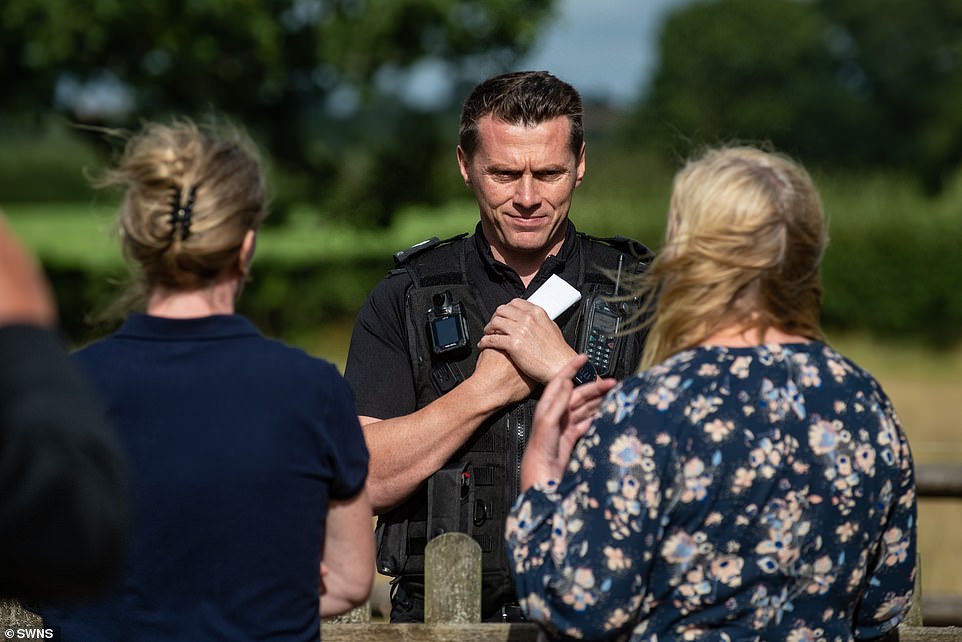 The 50-year-old vet and alpaca breeder feared the visit could represent the end of Geronimo’s journey, but was quickly assured the execution would not take place 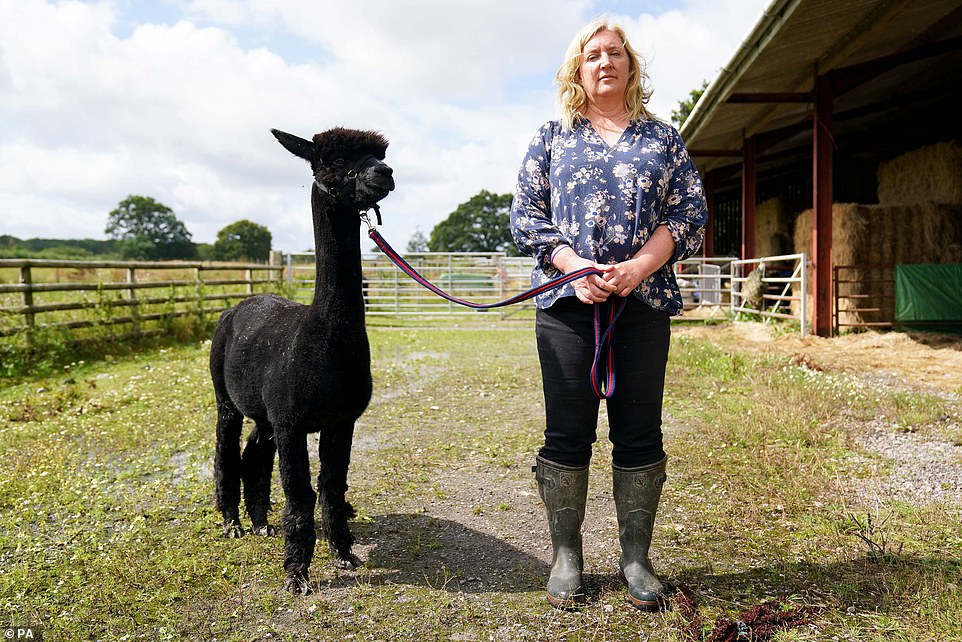 Boris Johnson has refused to save Geronimo, an eight-year-old alpaca from New Zealand now living in south Gloucestershire, which was condemned to death by a High Court judge after twice testing positive for bovine tuberculosis (pictured with owner Helen Macdonald)

The 50-year-old vet and alpaca breeder feared the police’s Friday evening visit could represent the end of Geronimo’s journey, but was quickly assured the execution would not take place that day.

She said: ‘Two officers turned up to the farm as they wanted to make contact and see what type of opposition they might be met with and if they would need organised back up.

‘It was a bit of a recce it seems. They did say it would not be done today, but didn’t know anything else about timings etc.

‘We did not know they were coming so everyone shot down the drive with their cameras. I asked if they had a warrant, which they didn’t, and they then asked if they could speak to us without cameras.

‘They had a chat with me and my family for about 15 minutes and then they left.

‘They were just testing and wanted to see what the set up was, how many people were here and what type of opposition they would face.

‘I did not say anything to them about what it is going to be like.

‘They were quite concerned and said they had powers to come and keep the peace, which was all they would do.

‘They are hoping it would all be done quietly without any fuss and that is clearly what they are wishing for.

‘They said they only get one chance to do it and there is going to be a lot of people here.

‘But again, the police turning up at my home made me feel like a criminal.

‘I don’t know when they will come back, but my guess was first thing tomorrow morning. Why else would they turn up like that this evening?

‘Despite all the millions of people asking for fair treatment for Geronimo, it appears Defra are still planning to upset the will of the people.

She made an impassioned plea to the Prime Minister’s wife, Carrie Johnson, to save him today.

She said: ‘I am appealing to Carrie directly to ask the Prime Minister to intervene. She is a patron of the Conservative Animal Welfare Association and has campaigned for the environment and the welfare of animals.

‘As an animal lover, surely she cannot stand by and let this happen? I am begging her woman to woman to do what she can.

‘She and Boris have a beautiful dog, Dilyn, who they clearly adore. I feel about Geronimo exactly the way they feel about him. Please Carrie, help Geronimo. He really does not deserve to die.’

Miss MacDonald has repeatedly appealed to the Prime Minister and Environment Secretary George Eustice to halt the destruction order, which she claims is based on inaccurate testing.

Boris Johnson has so far refused to save the alpaca despite pleas from more than 80,000 animal lovers to prevent the killing of the stud.

The Prime Minister’s official spokesman said: ‘We know how distressing losing animals to TB is for farmers and our sympathies are with Ms Macdonald and everyone with animals affected by this terrible disease.

‘The Environment Secretary has looked at this case very carefully, multiple times over the last few years, and has interrogated all the evidence with expert vets alongside the Animal and Plant Health Agency.

The spokesman said the Government would ‘continue to do everything that we can’ to eradicate bovine TB.

Asked whether there could be one more test carried out on Geronimo, the Prime Minister’s official spokesman said: ‘The test used on Geronimo is highly specific, it is validated, it is reliable and the risk of a false positive is extremely low.

‘A retest after two consecutive positive test results wouldn’t invalidate the previous tests. So, there’s no plans for any further tests.’

He added: ‘We recognise how distressing this clearly is for Ms Macdonald, as it is for farmers who have had to put cattle down – 27,000 had to be put down last year alone.

‘We need disease control measures to be applied consistently if we are able to tackle it and obviously that’s why we need to move ahead now. 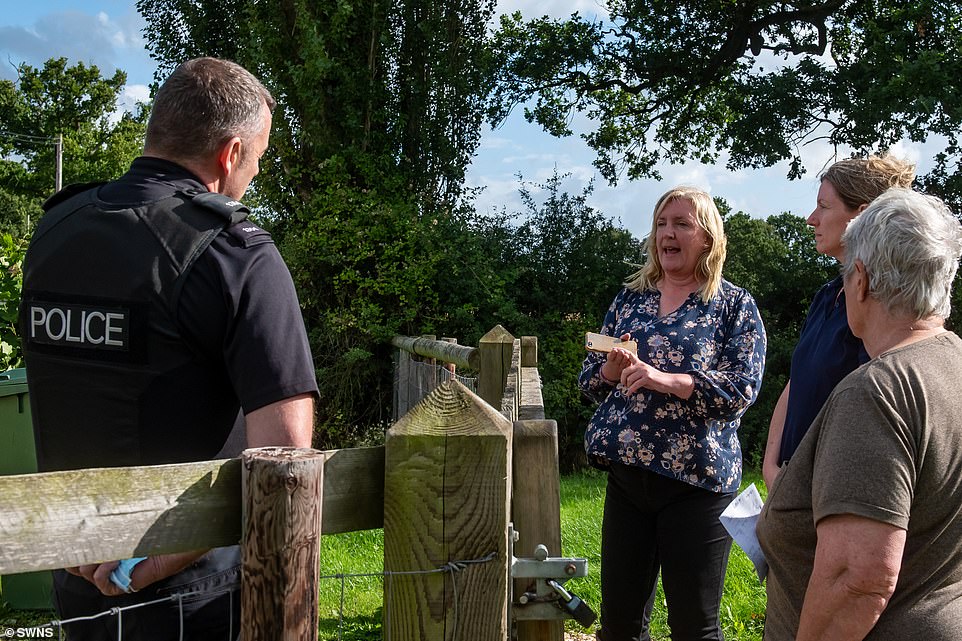 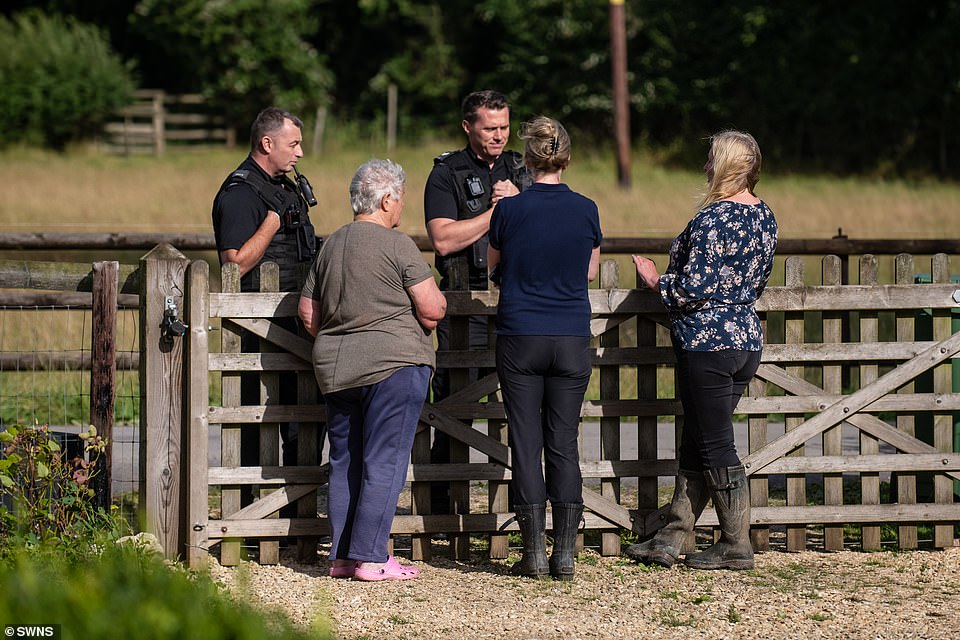 The pair of police officers were pictured speaking to Mrs MacDonald at her Shepherds Close Farm in Wickwar, Gloucestershire

‘We have done these highly accurate tests and we’ve no plans to change that.’

Mr Eustice spoke for the first time on the matter on Thursday to say he would not change his stance, and added: ‘My own family have a pedigree herd of South Devon cattle and we have lost cows to TB, so I know how distressing it can be and have huge sympathy for farmers who suffer loss.

‘I have looked at this case several times over the last three years and gone through all of the evidence with the Chief Vet and other experts in detail.

Wildlife TV presenter Chris Packham and actress Joanna Lumley are among those who have spoken out in support of Geronimo.

In a tweet on Thursday, Packham asked Mr Johnson and Mr Eustice: ‘Quick question, what do you think will happen if Geronimo is euthanised today & the pm shows he doesn’t have bTB? Won’t that be a PR and policy disaster? #savegeronimo.’

Miss Macdonald claims the Department for Environment, Food & Rural Affairs (Defra) has ‘lied’ about the tests carried out on Geronimo which she believes resulted in ‘false positives’.

She told Sky News on Friday: ‘This is about Government behaviour and official behaviour. They’re trying to uphold the regime.

‘He came from a farm in New Zealand where there’s been no TB since 1994. It’s bonkers.

‘If there was disease present we wouldn’t be having this conversation, he would’ve died years ago. But he’s fit and healthy.’

The court order came into effect on Thursday and Defra now has 30 days to visit Ms Macdonald’s farm in south Gloucestershire and put him down. 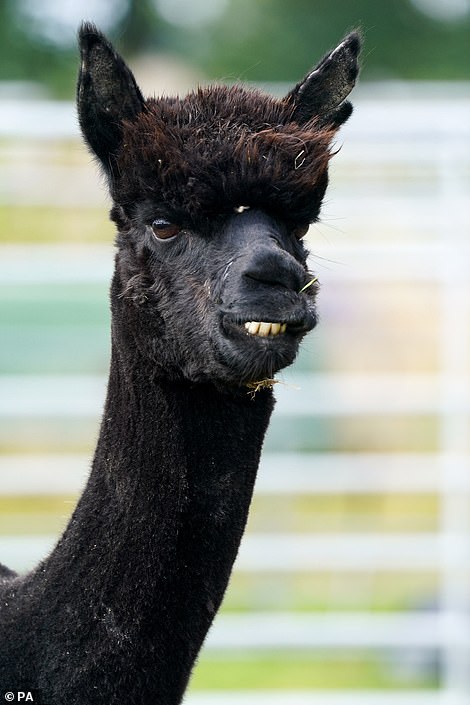 Miss Macdonald added: ‘The entire industry is up in arms because this really is the senseless destruction of an innocent animal.

‘They have a choice here. They don’t have to kill him; they could at least test him first.

‘It’s a really upsetting situation. I don’t want Geronimo’s last moments to be of being caught by a man who will put a gun to his head before he’s shot, but then I don’t want to consent to having him euthanised. That’s no choice at all.

‘Asking me to do that to a healthy animal as a vet who has been saving lives for 30 years is the worst thing they can do to my mental health. They are putting me through hell.

‘I feel frustrated, angry and deceived. There is a complete lack of transparency.’

Defra has defended its methods after it was revealed the tests have never been trialled for their accuracy in detecting bovine tuberculosis in alpacas, and that Geronimo had tested negative on four occasions in New Zealand.

A Defra spokesperson said: ‘We are sympathetic to Ms Macdonald’s situation – just as we are with everyone with animals affected by this terrible disease.

‘It is for this reason that the testing results and options for Geronimo have been very carefully considered by Defra, the Animal and Plant Health Agency and its veterinary experts, as well as passing several stages of thorough legal scrutiny.

‘Bovine TB causes devastation and distress for farmers and rural communities and that is why we need to do everything we can to reduce the risk of the disease spreading.’