A scarred back from repeated whippings, an auction house nestled between two Atlanta tobacconists and two bedraggled men who tried to escape: Harrowing realities of 19th century slavery revealed in newly colorized photos

The harrowing reality of American slavery in the 19th century has been brought into sharp focus by a photo restorer who has colorized old images of its victims.

Tom Marshall, 32, has restored a number of powerful photos, including one showing a man whose back is covered with countless lacerations, to mark Black History Month in the UK.

Others include a slave auction house proudly called ‘Auction and Negro Sales’ nestled between a tobacconists and a glassware shop.

Tom said: ‘I believe that colorizing a photo opens a window into another time and with the world the way it is, it’s important to revisit the stories of these people in order to better understand the world today.’ 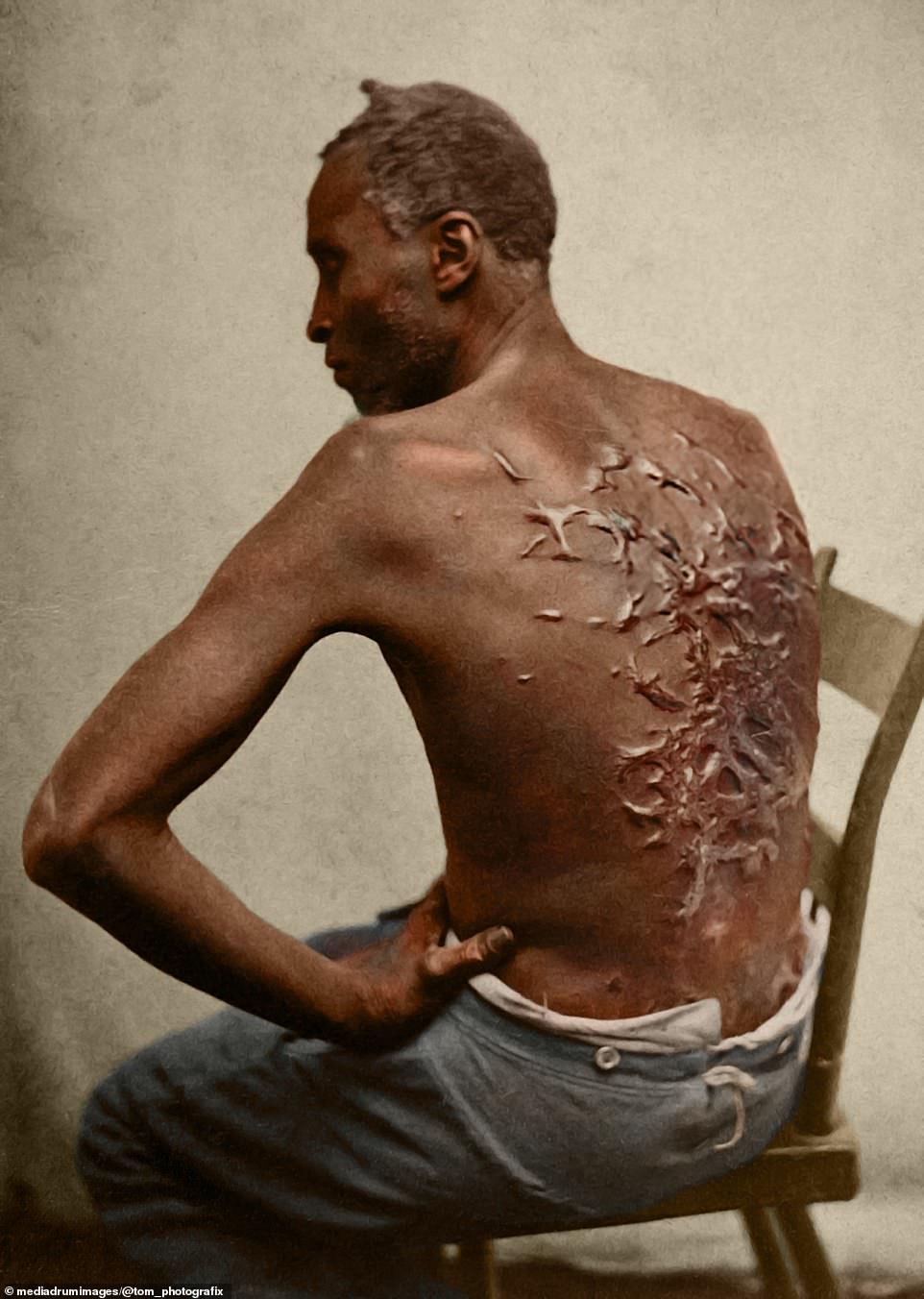 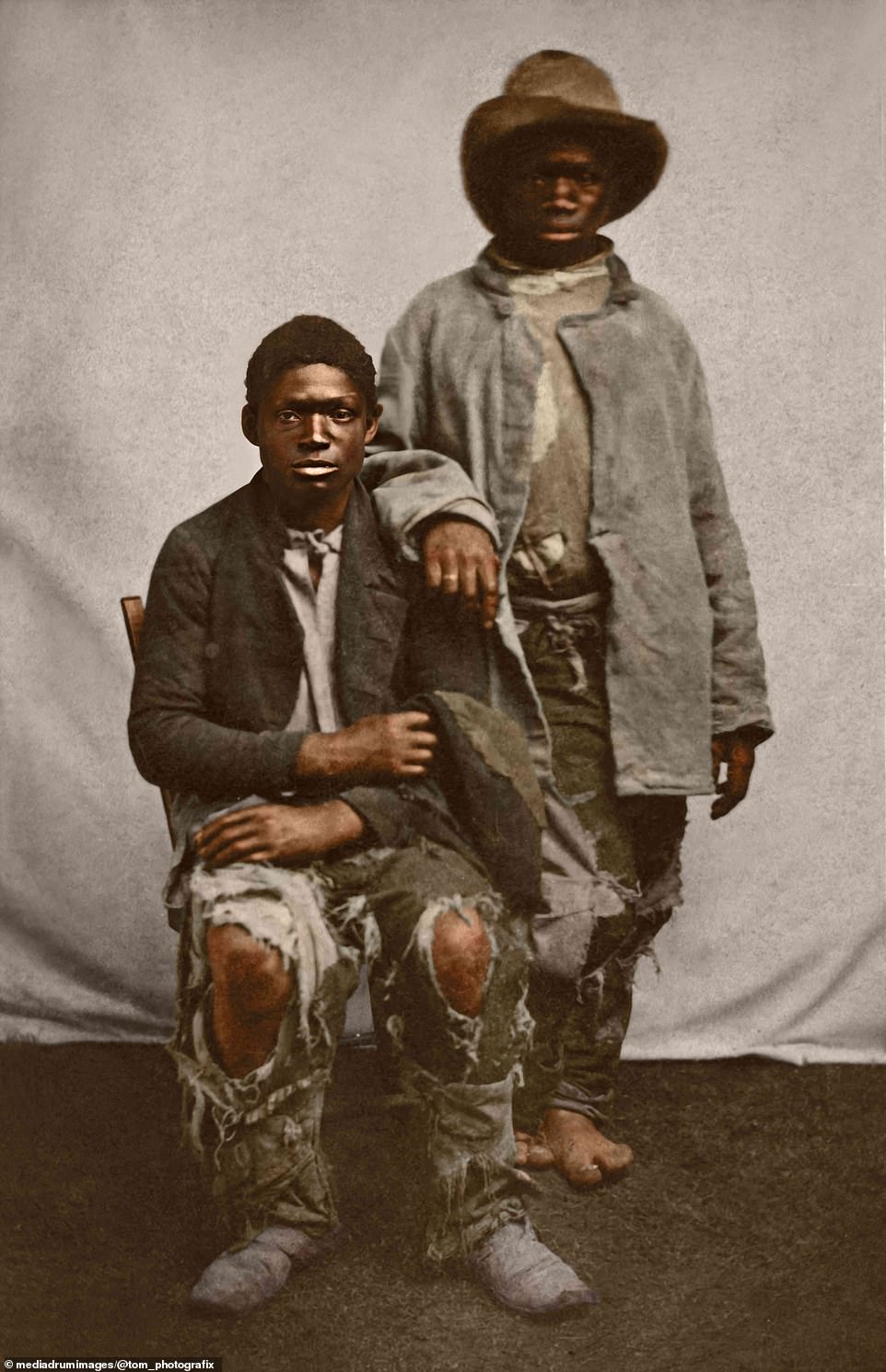 Two unidentified escaped slaves pose with tattered clothing in Baton Rouge in 1861. The caption on the reverse of the image read ‘Contrabands just arrived’. Contraband was a term introduced that year after the Union Army determined that the US would no longer return escaped slaves who went to Union lines, classifying them as ‘contraband of war’ 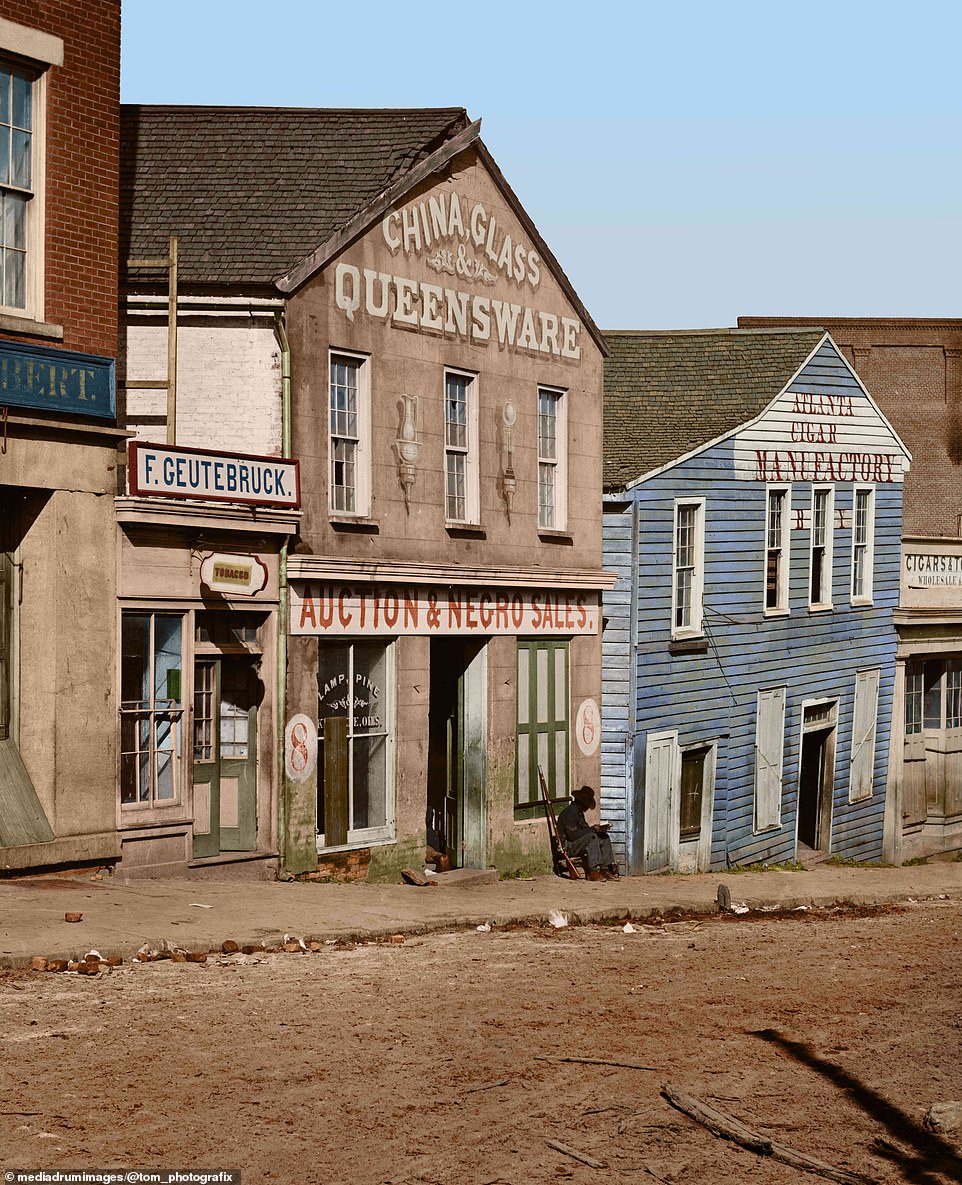 Thomas Marshall colorized a photo showing an ‘Auction and Negro sales’ shop in Whitehall Street, Atlanta, Georgia in 1864. The auction house would have seen slaves inspected for sale, poked, prodded and forced to open their mouths for the buyers. Younger and stronger people would receive higher bids, while older or sickly people would be considered less valuable. The slaves would go to the highest bidder 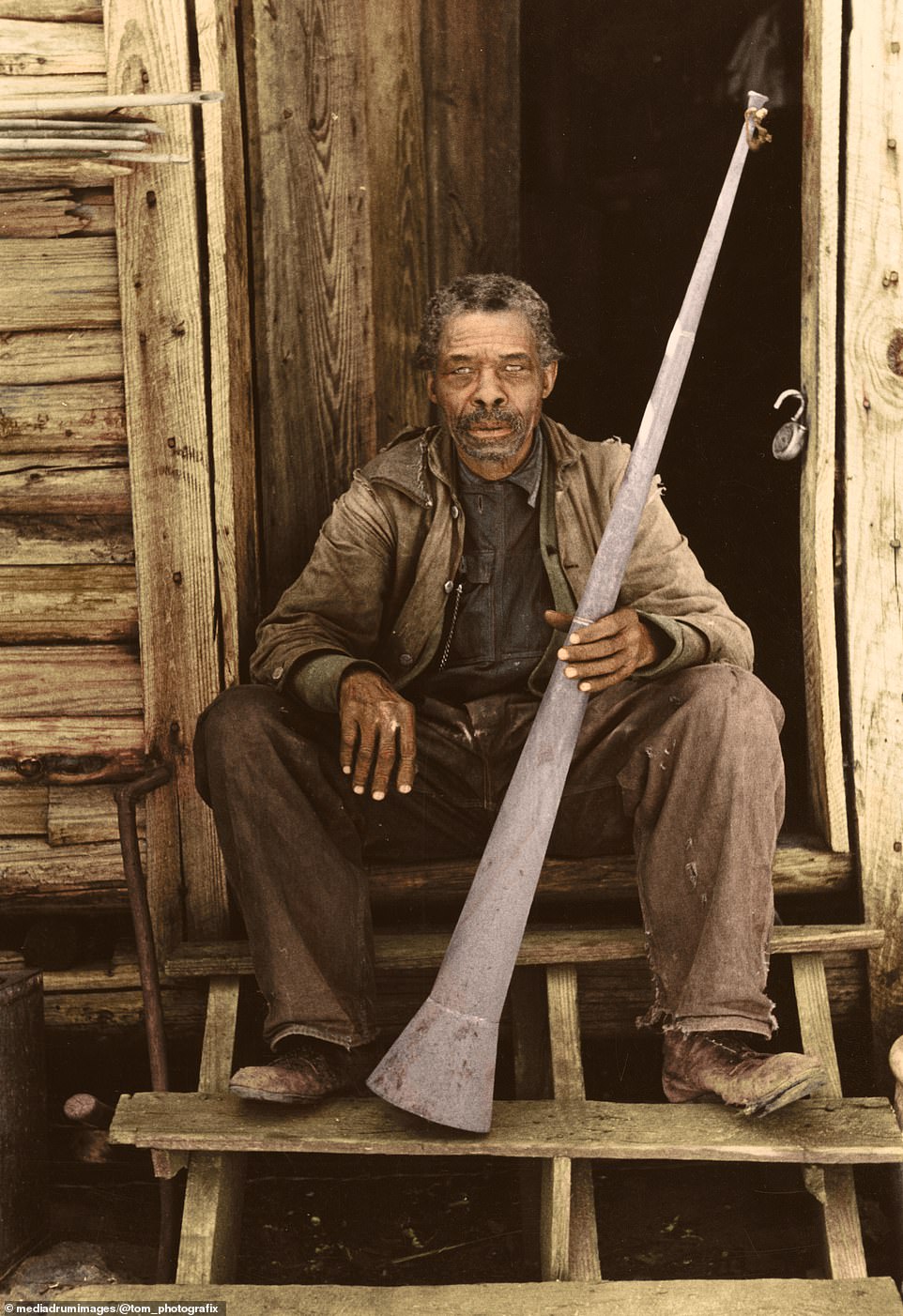 Willis Winn, a former slave, holds a horn used to call slaves to work every day. In the photo, taken by Russell Lee in 1939, Willis claims to be 116 after learning from his youth that his birthday was in 1822 from his master Bob Winn in Louisiana. When interviewed by Lee, Willis was living alone in a one-room log house and was supported by an $11 per month old age pension. He said that black people were still being treated like slaves in the 1930s

The photos, which date back to the US in the 1850s, show the awful conditions slaves were subjected to until 1865 when the barbaric practice was made illegal.

One of the most distressing photos from 1863 shows an escaped slave called Gordon who was also known as Whipped Peter.

The image was widely shared by abolitionists as part of their anti-slavery campaign, one of the earliest forms of photography as propaganda.

His back is covered with wounds after being repeatedly whipped, and he is revealing his scars at a medical examination in Baton Rouge, Louisiana.

Gordon escaped his master in Mississippi by rubbing himself with onions to throw off the bloodhounds who were trained to prevent the slaves from running away. 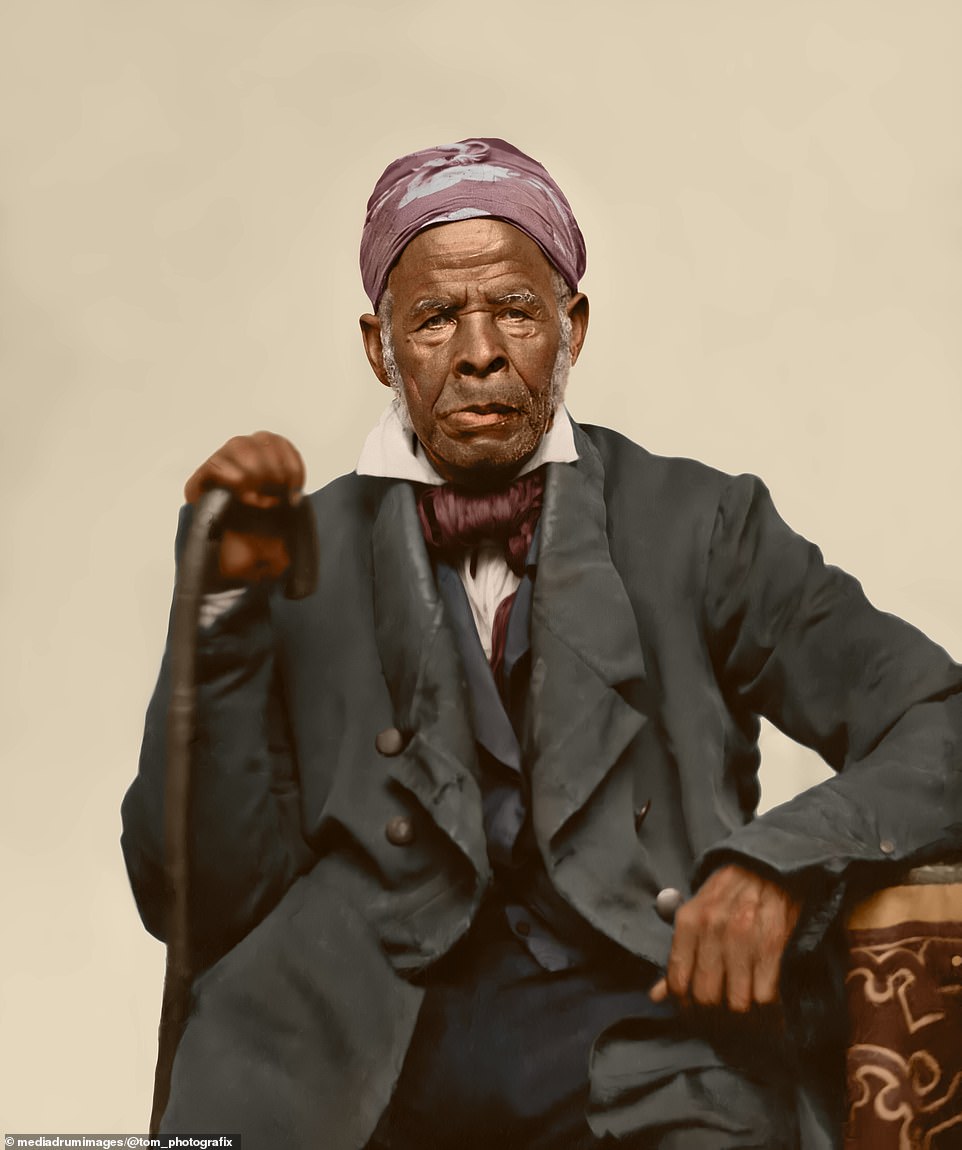 Omar Ibn Said from Senegal was one of the earliest Muslim slaves captured on film in the US, in this picture believed to be taken in the 1850s. The slave who settled in North Carolina was also known as Uncle Moreau, Uncle Marian and Prince Omeroh. He wrote a series of works on theology and philosophy despite being enslaved his whole life 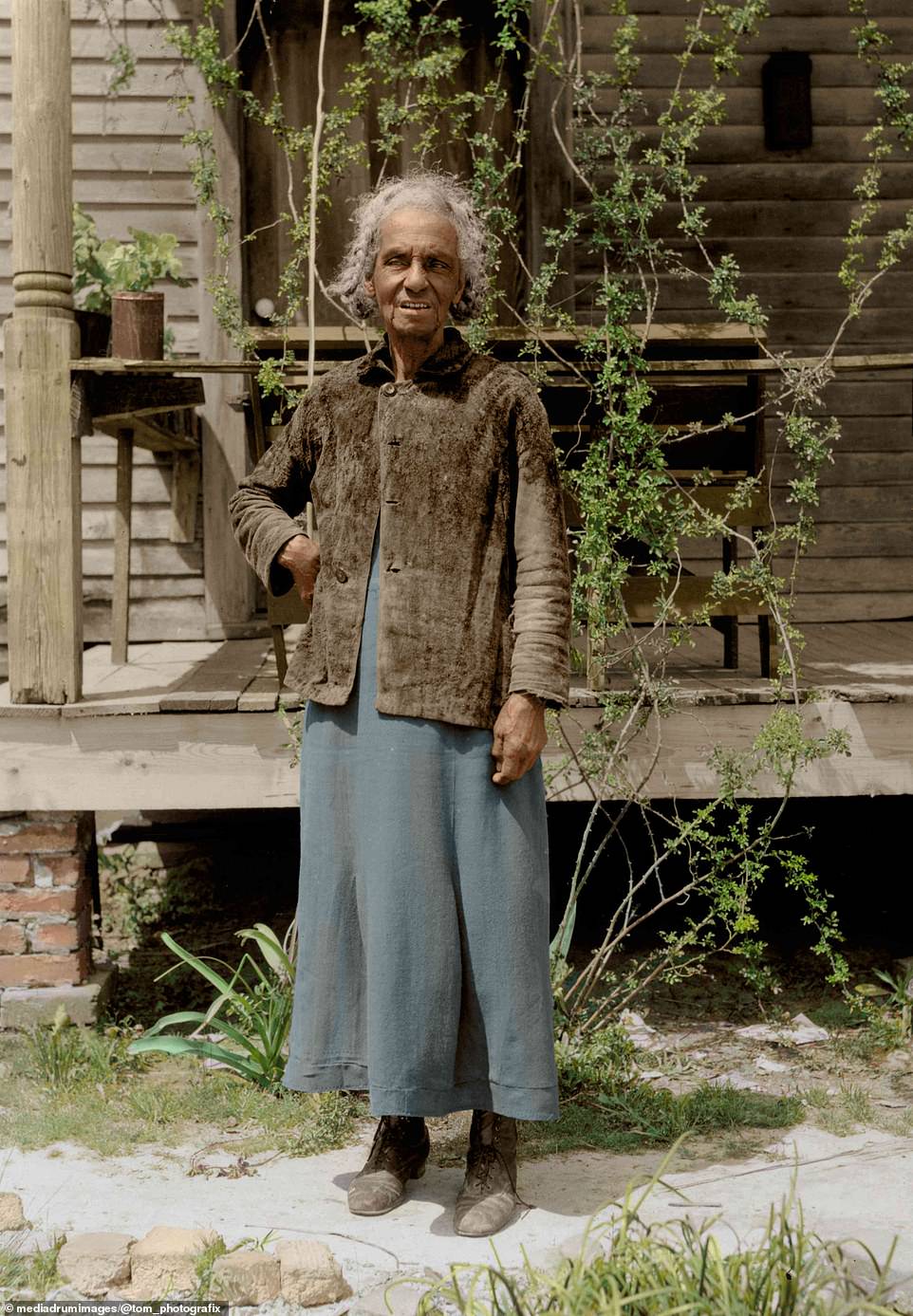 Georgia Flournoy, a former slave, is photographed in 1937 when she was over 90 years old. She was born in Elmoreland, a plantation in Old Glenville, and said that she never knew her mother as she died during childbirth. Georgia worked in the ‘Big House’, as a nursemaid, and was not allowed to socialize with any of the other enslaved people on the plantation 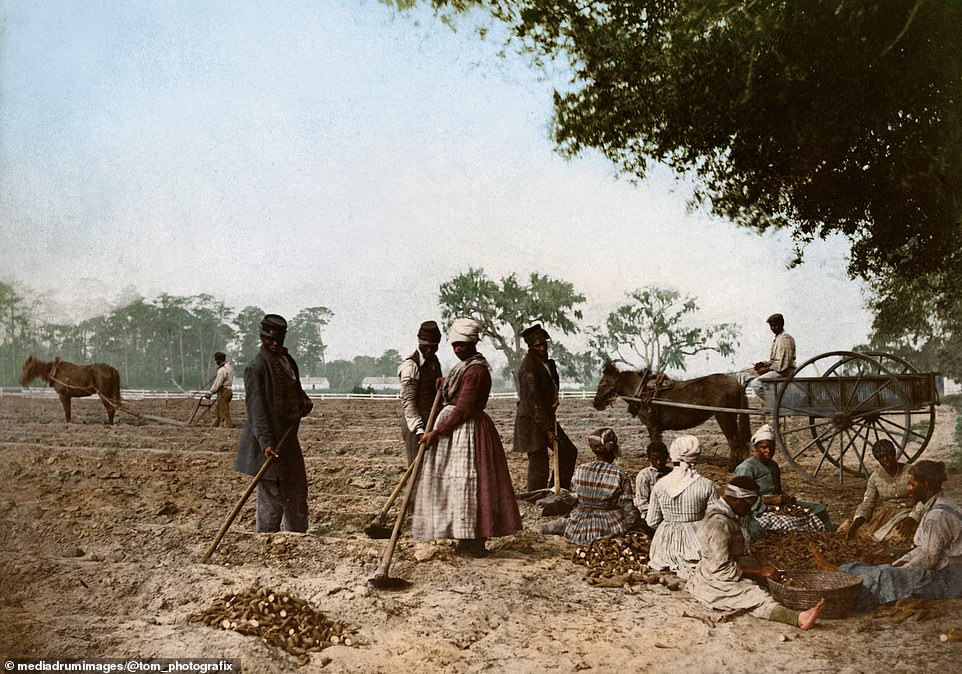 He took refuge with the Union Army at Baton Rouge, and in 1863 three engraved portraits of him were printed in Harper’s Weekly, showing the man ‘as he underwent the surgical examination previous to being mustered into the service – his back furrowed and scarred with the traces of a whipping administered on Christmas Day last.’

The pair were classified as ‘contraband of war’ under a new ruling in 1861 where escaped slaves who went to Union lines would not be returned.

Tom, from Melton Mowbray in Leicestershire, has unveiled the newly-colorized photos to mark Black History Month in the UK.

He said: ‘The civil rights struggle is alive throughout the world and recent events have fuelled the conversation about our shared history and the uncomfortable truth that for centuries, our nations have thrived due to the suffering of others. 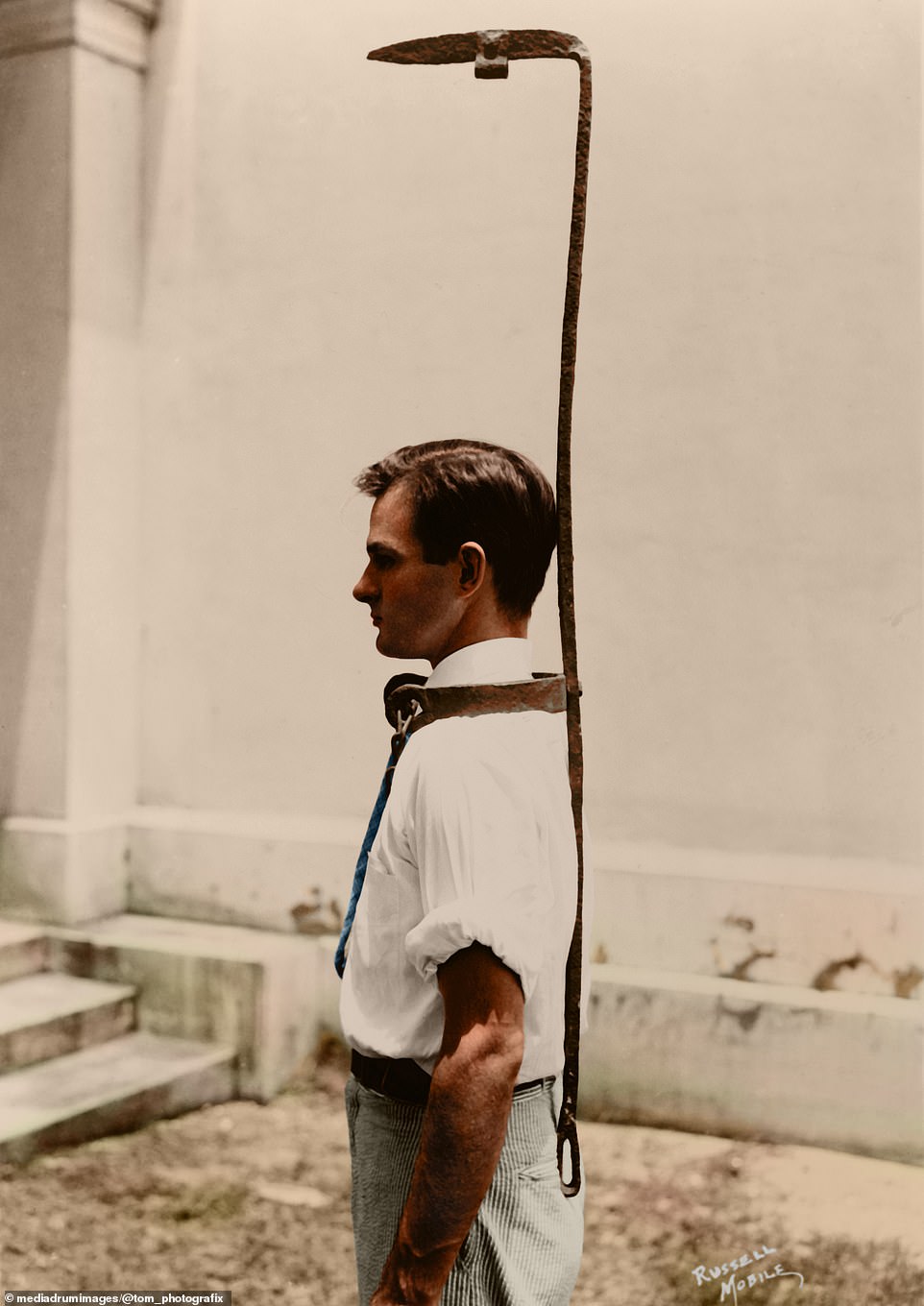 Richbourg Gailliard, assistant to the director of the Federal Museum, Mobile Alabama, demonstrating a Bell Rack in a photo taken by Russell Lee. The contraption was used by an Alabama slave owner to guard a runaway slave. The rack was originally topped by a bell which rang when the runaway attempted to leave the road and go through foliage or trees. It was attached around the neck as shown in the picture. A belt passed through the loop at the bottom to hold the iron rod firmly fastened to the waist of the wearer 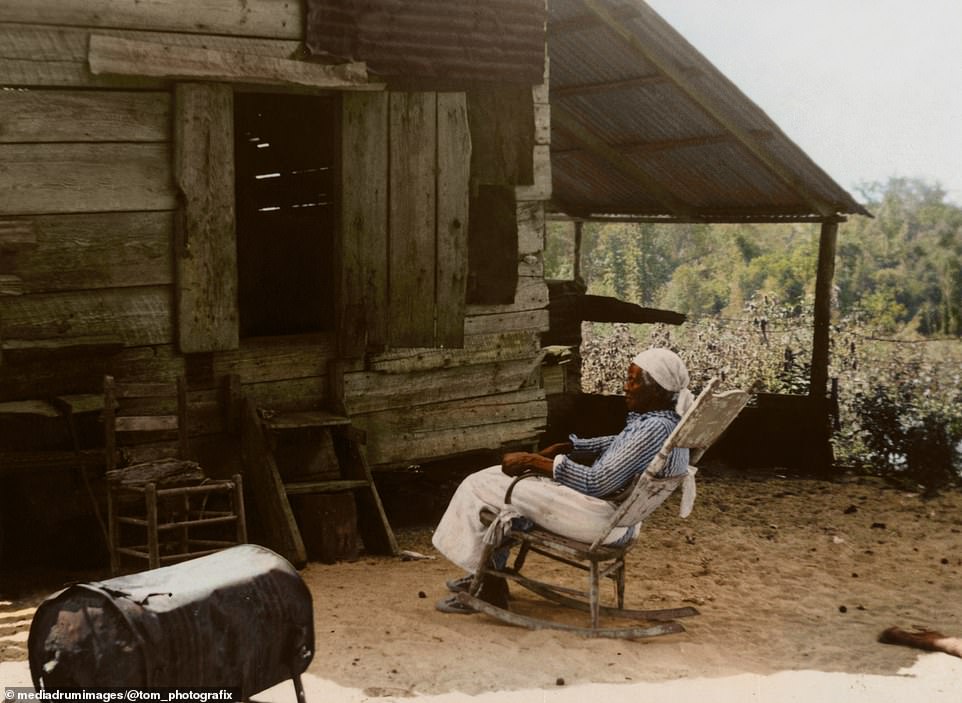 Former slave ‘Old Aunt’ Julia Ann Jackson was aged 102 when she was photographed by the corn crib where she lived. This photo was taken in 1938, in El Dorado, Arkansas. She used the large battered tin can for a cooking stove 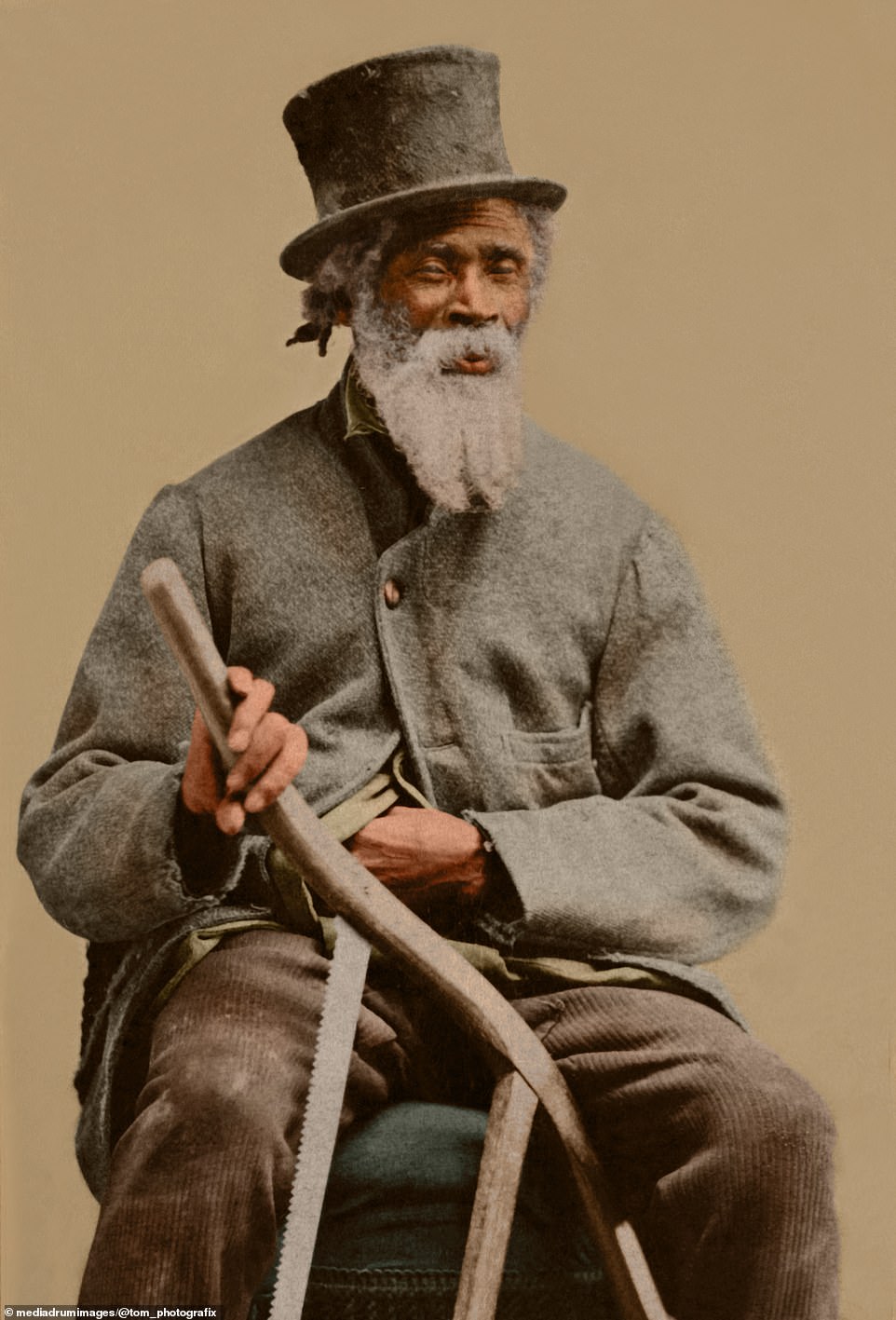 An unnamed slave of Richard Townsend is pictured, taken on an unknown date. The photo was taken at W.H. Ingram’s Photograph and Ferrotype Gallery, No. 11 West Gay Street, West Chester, Pennsylvania

‘I have colorized these photos as a means to share some of the stories of those pictured.

‘These photographs show the horrors of life for those living under slavery and the accounts of those who survived into old age as free as they were allowed to live under a still highly segregated society.’

Among the other photos is one of Omar ibn Said who was said to be the first Muslim slave captured on film in the US.

Said was a prominent scholar and theologian who wrote a series of works on philosophy despite being enslaved.

He added: ‘Growing up in Britain, I’ve never been taught about the nineteenth century outside of the Industrial Revolution.

‘So, when researching into the background of these photos, I learned a considerable amount about how much the trade in human beings built the modern world.

‘While the slave trade throughout the British Empire was abolished in 1807, when the technology did not exist to capture the British slave trade on film, the final years of slavery in the USA were recorded.’

Despite abolishing the practice 58 years before the Americans, Britain continued to depend on slave labor in the plantations of the USA for major imported consumer goods such as coffee, cotton, rum, sugar, and tobacco.