London: Unnamed “sources” will no longer speak for the Duke and Duchess of Sussex in the media, their team have said.

The Sussexes’ communications team at Archewell will speak on the record or not at all, as fans of the couple are warned to pay no heed to mystery “sources” claiming to talk for them in the media. 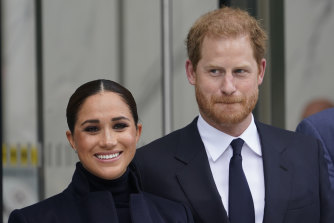 Meghan and Harry have said their team will in the future either speak on the record or not at all. Credit:AP

It follows the couple’s campaign against sections of the media, which the Duchess, formerly Meghan Markle, has criticised as a “model that rewards chaos above truth”.

Prince Harry, who has a job at the Aspen Institute’s Commission on Information Disorder, has similarly condemned the “avalanche of misinformation” to be found online. The move is aimed at making clear when stories are true, confirmed by a spokesperson, and when they are not authorised by Team Sussex.

It will require a marked difference in reporting, particularly in the US where flattering comments about celebrities from unnamed sources are common in even upmarket showbiz magazines.

Anonymous “friends” have long spoken about the couple, with some genuine associates doing so in an effort to protect the Duchess against what they considered unfair coverage. Her recent court case against the Mail on Sunday arose from a handwritten letter to her father first revealed by anonymous friends in People magazine in the US.

In the article five friends were described as telling “the truth” about the Duchess in February 2019, after a series of articles alleging she had behaved badly while at the palace.

“Forget the fact of who she’s married to – she was royalty from the day I met her,” said one.

“The way she carries herself, interacts with people, is how you would expect an actual royal to behave. She personifies elegance, grace, philanthropy.” Another said: “She can make a five-star meal out of the garbage in your refrigerator.”

In some cases, it is suspected, unnamed sources represent little more than made-up quotes. However, some anonymous sources have provided briefings that have turned out to be an accurate reflection of what the Duke and Duchess think.

Earlier this year, the Court of Appeal heard details of an email sent by the Duchess to her then communications secretary Jason Knauf, in which she provided a memo ahead of him speaking to her biographers.

It read, in part: “The Queen offered Windsor which the couple gratefully accepted. They are also very happy to have the space and privacy that Windsor affords.”

The Sussexes used to be represented by their own press secretary at Buckingham Palace and before that Kensington Palace, before leaving the working family for a new life in California.

They now employ a team to run their non-profit foundation Archewell, including James Holt, its executive director, Toya Holness, global press secretary, and Christine Schirmer as head of communications.