At his son’s Bar Mitzvah some six decades ago, an unconfident Eddie Jaku struggled to articulate himself as he addressed the crowd in his thick European accent. 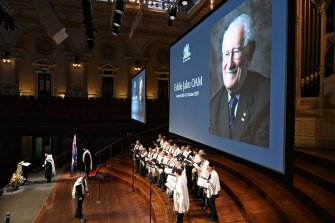 But a state funeral for the 101-year-old holocaust survivor has heard of a man who not only found his voice but used it to change thousands of lives as he propelled his message of love, forgiveness and resilience around the globe.

“We, his family, are quite incredulous at the profound impact, in some cases life changing, which he apparently had on so many all over the world,” his son Michael Jaku told mourners at Sydney Town Hall on Wednesday.

“As evidenced by the many hundreds of letters, emails and messages he received over the years, and we continue to receive since his passing.” 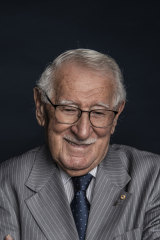 Michael Jaku said his father, who died on October 12, was a charismatic individual with an unfailingly positive outlook.

“He was so confident in his continuing longevity … after obtaining his unrestricted driver’s licence at age 100, he was proud to announce that having been offered a one-year or three-year licence, he took the three-year,” Mr Jaku recalled.

The service heard the self-proclaimed “happiest man on earth” felt a responsibility to speak on behalf of the six million Jews silenced in the holocaust.

He grew in confidence as he discovered his latent public speaking abilities, delivering countless keynote speeches, authoring a best-selling memoir and receiving a standing ovation when he delivered his TEDx talk at the age of 99.

Chief Minister of the great synagogue Rabbi Dr Benjamin Elton said Eddie Jaku could deliver his message with great eloquence and his efforts only seemed to increase with age.

“How does one give a eulogy for the happiest man on earth?” Dr Elton said.

“This description … tells us about the true greatness of Eddie Jaku.

“That a man who had suffered as he did could describe himself in those terms is a testimony to his heroic spirit that triumphed and conquered and then inspired.” 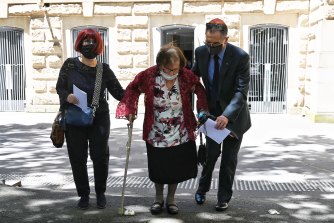 Mr Perrottet said Mr Jaku had left a great mark on the city through his role as the Sydney Jewish Museum’s oldest Auschwitz survivor and volunteer.

He had been energetically telling his story to visitors and school groups since the museum’s opening in 1992.

“A man who endured great pain and terror and yet had such a zest for life,” Mr Perrottet said.

“That is the story of Eddie’s life. He turned suffering into strength.”

Eddie Jaku was born to a large German family in 1920. He was detained multiple times during the war, including in the Buchenwald and Auschwitz concentration camps, from which he was sent on a death march.

While Mr Jaku’s beloved parents were executed in the gas chambers, he engineered multiple escapes from Nazi incarceration throughout the war. 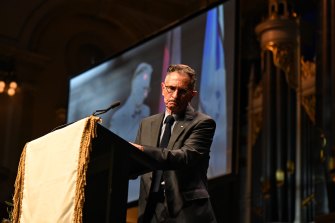 In 1945, he was rescued by American forces after they discovered him gravely ill and weighing 28 kilograms, hiding in a cave where he survived on slugs and snails.

Mr Jaku emigrated to Australia with his wife, Flore. Family paid tribute to Flore as a devoted spouse who made an enormous contribution to her husband’s work in public life.

Together, they ran several successful businesses and had two sons, four grandchildren and five great-grandchildren.

Marc Jaku shared his grandfather’s oft-repeated favourite sayings, including “tomorrow will come but first enjoy today” and “shared sorrow is half sorrow, but shared pleasure is double pleasure”.

He said Eddie’s approach was to teach people to reject hate and to find ways to help themselves when they encountered life’s difficulties.

Danielle Jaku-Greenfield described her grandfather as a “life force” and “everybody’s best friend”.

“[Eddie] was a tactile soul who loved connection and genuinely wanted to bring out the love in everybody. That is a characteristic that comes from years of being vulnerable,” she said. 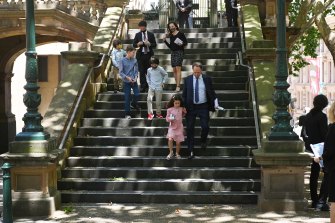 Ms Jaku-Greenfield said she had been moved to learn of how deeply her grandfather’s message had resonated.

“People shared with him deeply personal stories of him having brought them back from a nervous breakdown, inspired fractured families to forgive and reunite after years of no contact and encouraged teenagers to kiss and hug their mothers,” she said.

Chief executive of the Sydney Jewish Museum Norman Seligman said Mr Jaku had a wonderful sense of humour and was so spritely in his old age he sometimes seemed “immortal”.

He always obliged when asked to talk to people in the museum, Mr Seligman said.

“Sometimes he said he only had about five minutes but half-an-hour later Eddie was still there, enthralling them with every single word.”

President of the NSW Jewish Board of Deputies Lesli Berger said each loss of a holocaust survivor was a “terrible loss for humanity”.

“I encourage you to continue to look for the miracles,” he said. “It is now your responsibility to continue his legacy.”