Home » World News » His own car at seven and a pistol at 11: Kim Jong-un’s youth revealed

Taiwan: A biography of North Korean leader Kim Jong-un has revealed fresh details of the privileged but cloistered childhood that paved the way to his tyrannical rule.

According to The Great Successor: The Secret Rise and Rule of Kim Jong Un by Washington Post journalist Anna Fifield, Kim's lonely early years were spent in walled luxury compounds with 4.5 metre iron gates in the capital Pyongyang and at the family beach home in the coastal city of Wonsan. 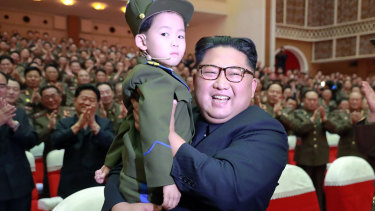 North Korean leader Kim Jong Un holds a boy in his arm during a musical performance in this photo provided by the North Korean government. Credit:AP

His father, Kim Jong-il, then the regime's leader, ensured he had Super Mario video games, pinball machines and more gadgets than any European toy store. He watched Ben-Hur, and Dracula and James Bond films in private cinemas.

Young Kim was obsessed with model planes and ships but also had a real car his father had modified for him to drive when he was seven – and a Colt.45 pistol that he wore on his hip when he was 11.

"The boy grew up thinking he was special," said Fifield. His eighth birthday was spent in a black suit and bow tie as deferential high-level officials offered him bouquets of flowers.

While Kim was shaped by his dysfunctional childhood, it was perhaps his strong personality that won his father's favour over his older half-brother, Kim Jong-nam, a rebellious playboy later exiled to Macau, and Kim Jong Chol, a second older brother who was closer in age but introverted and creative.

At 12, Kim was sent to school in Berne, Switzerland, in 1996, sporting a "pudding bowl haircut". He had limited academic abilities and a quick temper, according to former classmates.

The adolescent – who as an adult would have Kim Jong-nam as well as his uncle killed – was known to lash out at his peers, kicking them in the shins and spitting when they spoke in German, a language he struggled with.

He was said to be aggressive on the basketball court, where he wore a treasured Michael Jordan Chicago Bulls shirt, and often indulged in trash talk.

A fake Brazilian passport, under the name Josef Pwag, allowed him to roam Europe anonymously. Family photo albums show a young Kim swimming in the French Riviera, dining in Italy and visiting Euro Disney in Paris.

At home in the Berne suburb of Liebefeld, his aunt tried to create a normal family environment.

"Their friends would come over, and I would make them snacks. It was a very normal childhood with birthday parties and gifts and Swiss kids coming over to play," she told Fifield.

However, the author surmises that his teenage years in Switzerland "taught him that if he were to live in the outside world, he would have been entirely unremarkable, a nobody".

"Far from persuading him to change his country, these years would have shown him the necessity of perpetuating the system that had turned him, his father and grandfather into deities," she said.