Britain’s most powerful warship, HMS Queen Elizabeth, has loaded with munitions ahead of its first operational deployment later this spring.

The £3bn aircraft carrier has spent the past month on further sea trials before the visit to the new Northern Ammunition Jetty in Glen Mallan, Loch Long.

The fleet flagship was the first visitor to the new £64 million facility which was built by the Defence Infrastructure Organisation (DIO). 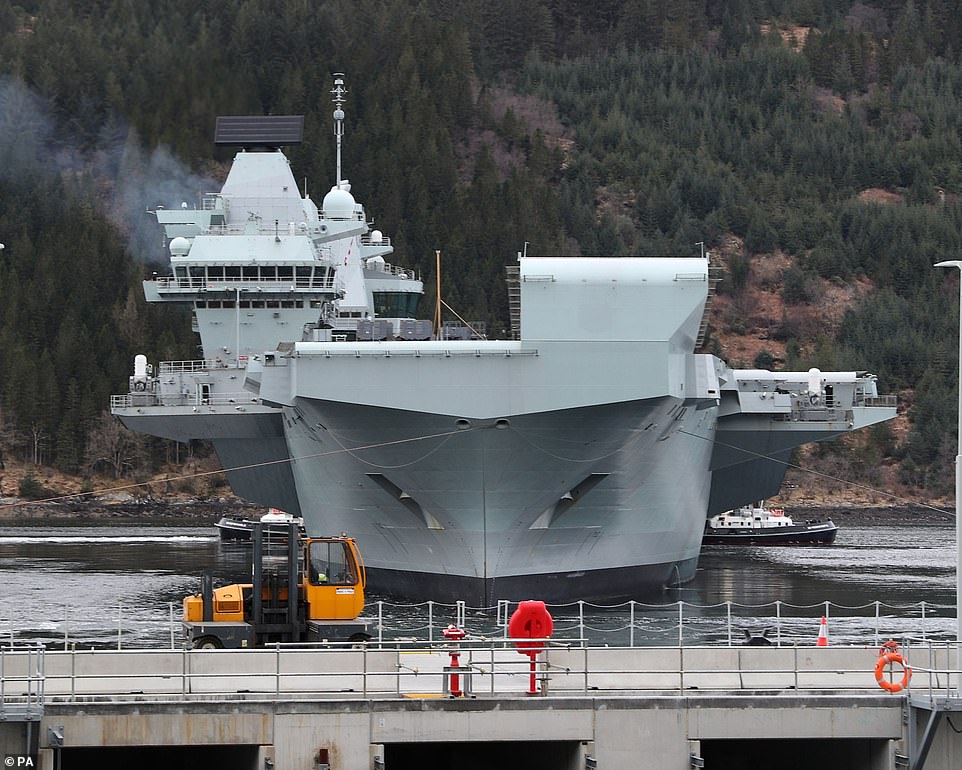 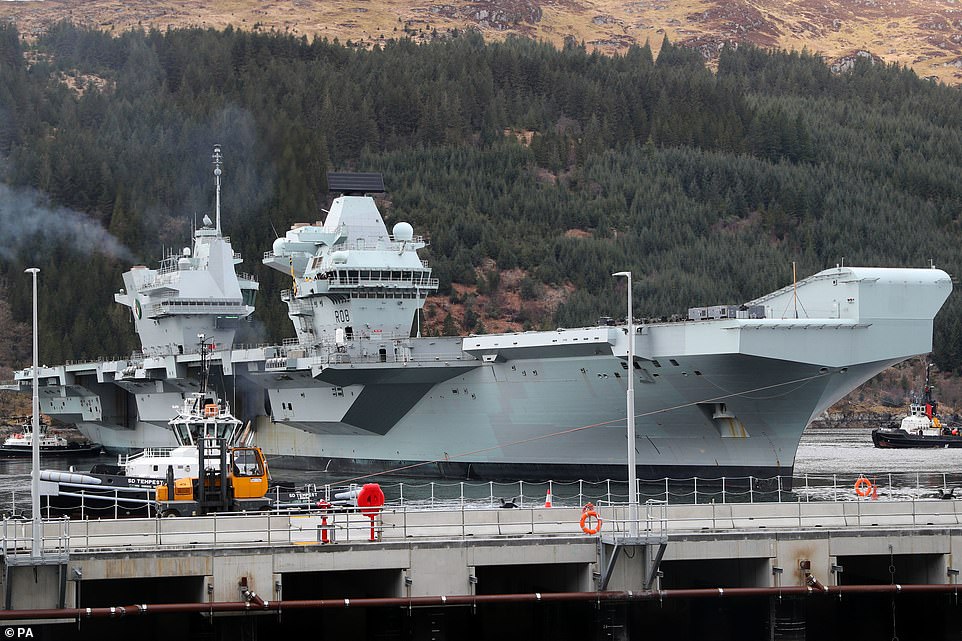 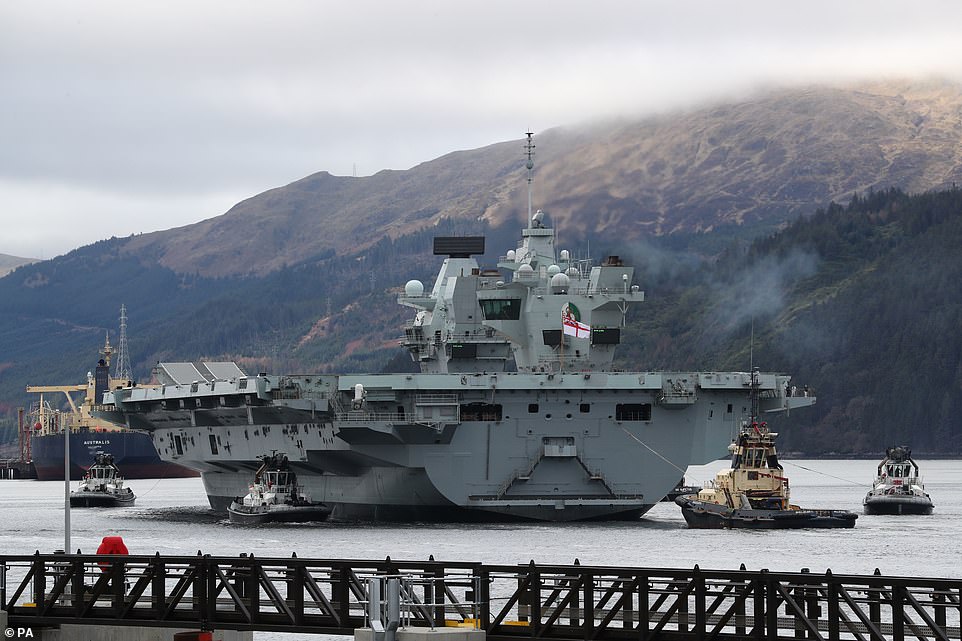 Big Lizzie was assembled in Rosyth, Fife, but this was her first return to the area since her launch.

Captain Angus Essenhigh, HMS Queen Elizabeth Commanding Officer, said: ‘We are very proud of the close connection our ship has with Scotland, especially with our affiliated city of Edinburgh.

‘HMS Queen Elizabeth embodies the best of British engineering and craftsmanship, including Scottish shipbuilding, and it is a privilege to return to her birthplace of Scotland.’

Operated by Defence Equipment and Support through Defence Munitions, the Northern Ammunition Jetty is specifically designed to support the surface fleet, allowing them to continue entering and berthing at Glen Mallan.

This is the first time HMS Queen Elizabeth has visited western Scotland, after she became a familiar sight in the Firth of Forth where she was assembled.

She berthed at the jetty for a routine loading of operational stores.

Defence Secretary Ben Wallace said: ‘HMS Queen Elizabeth has a very proud affiliation to Scotland and it is only fitting she returns before her first operational deployment later this year.

‘The £64m investment into the new Northern Ammunition Jetty reaffirms our commitment to supporting our core capabilities and defence estate across all corners of the UK.’ 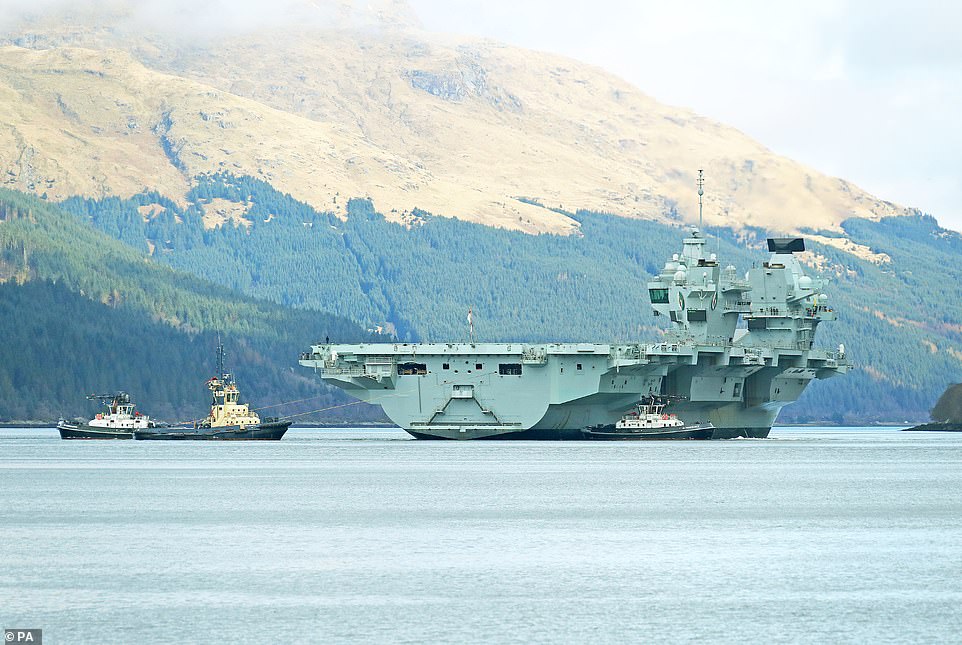 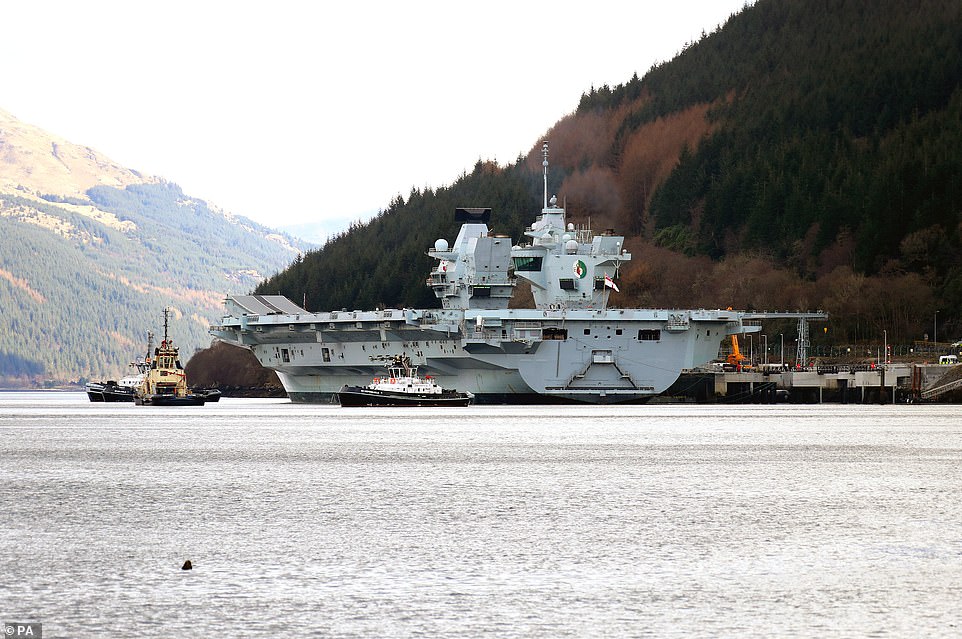 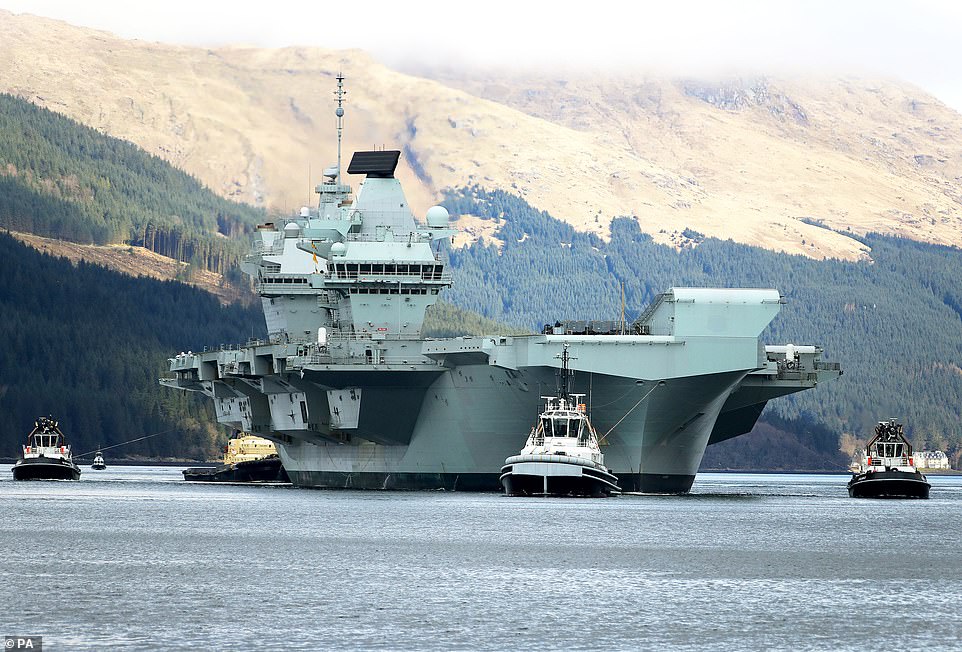 The 65,000-tonne carrier will carry up to 40 aircraft and will be escorted by Royal Navy Type 45 destroyer, Type 23 Frigates and some US Arleigh-Burke class destroyers. It is likely some Royal Navy submarines will also be part of the flotilla

HMS Queen Elizabeth is due to sail for Portsmouth at the end of the month, and will deploy to the Mediterranean, Indian Ocean and East Asia later this year, as part of the UK’s Carrier Strike Group.

The 65,000 tonne carrier is capable of carrying up to 40 aircraft and is primarily used to launch F35 strike aircraft.

Last year, Prime Minister Boris Johnson confirmed that HMS Queen Elizabeth will be at the centre of a carrier strike group deployment to the Mediterranean, the Indian Ocean and east Asia.

The carrier will embark F-35B jets from 617 Squadron (the Dambusters”) and Royal Navy Merlin helicopters, and will be escorted and supported by Royal Navy Type 45 destroyers, Type 23 frigates and support ships of the Royal Fleet Auxiliary.

The Queen Elizabeth and its F-35B Lightning jets will also be complemented by a detachment of the stealth fighters from the US Marine Corps as well as a US Navy destroyer during the deployment.

The carrier and its strike group will first take part in a war-fighting exercise with other Nato navies during Exercise Strike Warrior off Scotland in May before it departs for the Mediterranean.

In talks in February with their UK counterparts, Japan’s foreign and defence ministers expressed their ‘strong concern’ about a new Chinese maritime law which increases the danger of clashes with regional rivals.

The Coast Guard Law empowers the force to take ‘all necessary measures’ – including the use of weapons – if China’s national sovereignty is ‘illegally infringed upon by foreign organisations or individuals at sea’.

It also authorises the coastguard to demolish other countries’ structures built on areas claimed by China and to seize or order foreign vessels illegally entering China’s territorial waters to leave. 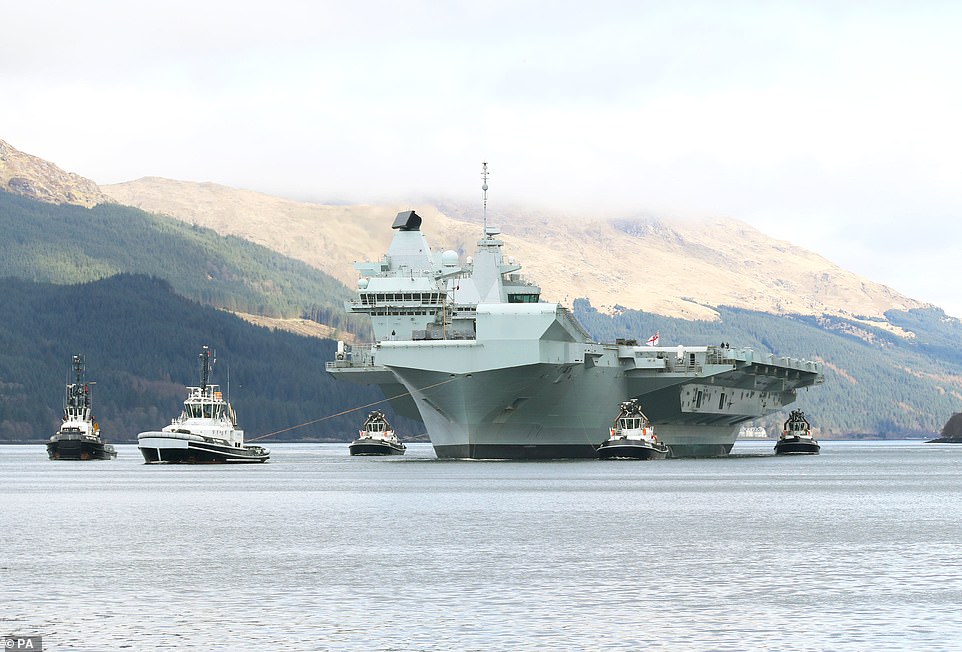 Beijing has already made clear its anger at the decision to send the carrier strike group, led by HMS Queen Elizabeth, to the region on its maiden operational deployment

Foreign minister Toshimitsu Motegi said: ‘Japan is staying alert and paying close attention to its effect on us. I believe the law should not be used in a way that violates international law.’

Beijing has already made clear its anger at the decision to send the carrier strike group, led by HMS Queen Elizabeth, to the region on its maiden operational deployment.

It comes at a time when China’s coastguard is active near disputed East China Sea islands controlled by Japan, but claimed by Beijing.

China also claims virtually the entire South China Sea, to the anger of other nations in the region as well as the United States.

Japan sees China’s escalating influence and military activity in the region as a security threat and has been stepping up defence co-operation with the US, Australia, and Southeast Asian countries, as well as Britain.

He said: ‘The most significant Royal Navy deployment in a generation demonstrates the UK’s commitment to working with our partners in the region to uphold the rules based international system and promote our shared security and prosperity.’

Foreign Secretary Dominic Raab said it was part of the UK’s ’tilt’ towards the Indo-Pacific region following Brexit.

At 280 metres long, with a lifespan of half a century and a flight deck of four acres, HMS Queen Elizabeth is Britain’s largest and most powerful warship ever built.

Here are the facts and figures behind the vessel which was officially commissioned into the Royal Navy December 7, 2017

HMS Queen Elizabeth, pictured, weighs some 65,000 tonnes and has a top speed of 25 knots and a four-acre flight deck