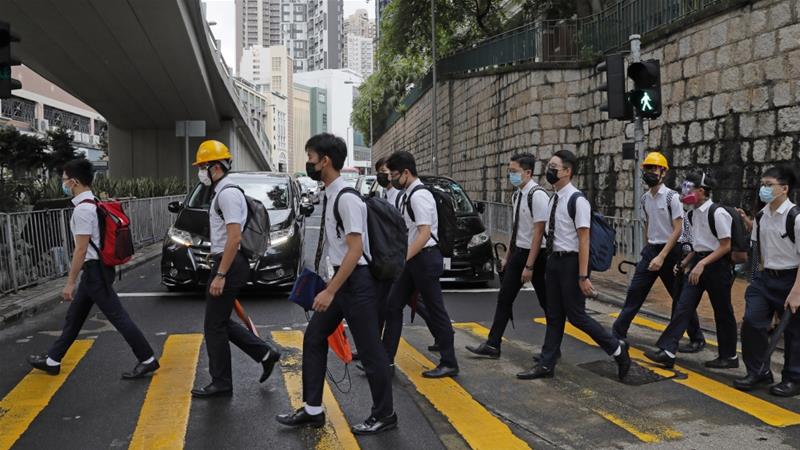 Hong Kong’s pro-democracy political party, Demosisto, said its chairperson was “taken” by government authorities early on Tuesday, one of a series of arrests that also included a student union leader and another young protest organiser.

Ivan Lam was “taken away” by customs officers as soon as he arrived at the Hong Kong International Airport on Tuesday morning.

“He will be arrested with inciting and participating in an unauthorised assembly. Our lawyers [are] following up now,” the party said in a social media post.

The Hong Kong Free Press reported on Tuesday that Lam “did not know he had been charged” when he left the semi-autonomous Chinese city on August 28.

In a statement on social media, the student union “strongly condemned” the police action and called on the government to immediately release Fong, who was reportedly confined to a hospital after feeling unwell.

For weeks, university and high school students have been in the front line of the pro-democracy protests.

On Monday, they led a city-wide strike that attracted thousands of young students.

Another protest leader, Michael Mo Kwan-tai, was also reportedly arrested on Tuesday morning, according to a report in the South China Morning Post.

Mo was one of the organisers of the Yuen Long protest in July, which turned violent after suspected triad members attacked unarmed protesters with wooden sticks and metal rods while inside the train station.

The protests against Hong Kong’s Beijing-backed government started after Chief Executive Carrie Lam introduced an extradition bill that would have allowed residents in the city to be tried in mainland China.

The protests have since evolved into a wider call for greater democracy and an investigation into allegations of police brutality.

Protesters say freedoms in the semi-autonomous city, unique within China, are being eroded by Beijing.

More than 850 people have been arrested in connection with the recent protests since June.