Hundreds of Victorian police officers, Australian Defence Force troops and workers were being trained in infection control and prevention in Melbourne on Saturday before their deployment to the state's revamped hotel quarantine program.

The final preparations for the return of international flights to the state were under way as Victorians waited for Sunday's announcement of further easing of coronavirus restrictions and the shape of the "COVID-normal" summer.

Some relaxation of the rules on face masks are expected as well as a significant easing of the restrictions on crowds at hospitality venues and major events but the current regulation of home gatherings is not likely to change when Premier Daniel Andrews makes his announcement on Sunday morning. 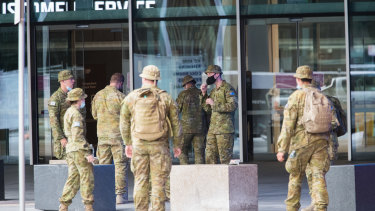 The state opposition is demanding that all mask requirements be removed on Sunday and wants the return of international travellers delayed, claiming the government has still not got its hotel quarantine arrangements right.

International flights are due to begin arriving again at Tullamarine on Monday, after a five-month lull, with passengers to undergo 14 days' mandatory quarantine at hotels around Melbourne.

But opposition police spokesman David Southwick said on Saturday that the government only realised on Friday that it would need fresh legislation to force passengers to pay the thousands of dollars it intends to charge for hotel accommodation. 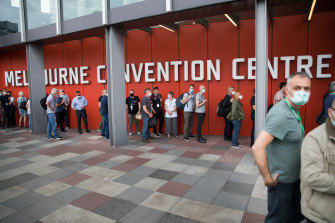 Even as the troops underwent their training at the Melbourne Convention Centre, Mr Southwick said their role remains unclear.

The government dismissed Mr Southwick's complaints, saying it had always been clear on its intention to charge incoming passengers for their quarantine and the need for legislation.

The Liberal frontbencher, who received a briefing organised by the office of Police Minister Lisa Neville, said the legal situation meant it was unclear if the government would be able to charge the travellers at all.

"I received a phone call at five o'clock yesterday [Friday] by the minister's office to say we need to rush legislation through the Parliament to ensure [we can] charge travellers going forward," Mr Southwick said. 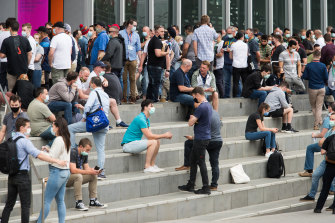 "We should have a user-pays system, but it just absolutely amazes me, when the government has had months to get this right, and yet at the very last minute they work out that they don't have the laws to be charging travellers."

The shadow minister called on Premier Daniel Andrews to delay the resumption of international travel back into the state, adding that the risk was too great of coronavirus escaping again from quarantine hotels and sparking a third wave of infections.

"If Daniel Andrews doesn't have it worked out, and doesn't have the systems in place and the people trained, quite frankly, Daniel Andrews should delay those planes coming in until hotel [quarantine] is appropriately signed off and ready to go," Mr Southwick said.

The Andrews government was forced into a last-minute revision of its request for defence force assistance in its revamped hotel quarantine program after the ADF rejected an initial proposal for troops to patrol every floor of "hot" hotels housing only coronavirus-positive patients.

Announcing the program earlier this week, Police Minister Lisa Neville and Mr Andrews said Victoria would request the support of a total of 220 ADF personnel on a rotation basis alongside 300 Victoria Police officers every day.

Instead, they will support police in hotel lobbies by helping residents enter and exit, as well as registering staff movements and temperature checking workers before their shifts.

A government spokeswoman told The Sunday Age that the program was ready.

"We are more than ready to manage international arrivals," the spokeswoman said.

"Police have already been providing security at hotels since July – and while we had hoped to see ADF free up police to do other important work, their decision not to undertake security and floor monitoring functions will not have an impact on our preparedness."

WWE couples with big age gaps up to 39 YEARS, from Jerry Lawler and Lauryn McBride to Hulk Hogan and Jennifer McDaniel