John Kerry, the new American envoy for climate change, has spent the last few days repeatedly telling world leaders that the United States is ready to help the world “raise ambition” to address global warming. Doing so, however, could mean big changes for America’s role in the world.

Foreign policy experts say that the Biden administration’s efforts must extend far beyond rejoining the Paris Agreement, the global pact by nearly 200 governments aimed at slowing climate change. Taking on climate change will require a reassessment of everything from United States priorities in the Arctic to helping fragile countries deal with the fallout of climate risks.

The first acknowledgment of that shift is expected on Wednesday, with the White House directing intelligence agencies to produce a National Intelligence Estimate on climate security, and telling the secretary of defense to do a climate risk analysis of the Pentagon’s facilities and installations.

“Addressing climate change can, and will be, a central pillar of the Biden administration’s foreign policy,” said Meghan O’Sullivan, who served as a deputy national security adviser under President George W. Bush and now leads the Geopolitics of Energy Project at the Harvard Kennedy School. “It means infusing the issue of climate and environment into our trade policies, our foreign aid programs, our bilateral discussions and even our military readiness.”

Mr. Kerry, a principal member of President Biden’s National Security Council, is in charge of navigating that shift. Here are four big things to watch in the coming weeks and months.

Can the United States address its own climate problem?

On his first day in office, Mr. Biden began the process of rejoining the Paris Agreement. Now comes the hard part: The United States, which is responsible for the single largest chunk of greenhouse gases that have warmed the planet since the industrial age, needs to set specific targets to reduce its own emissions by 2030 — and to put in place domestic policies to achieve them.

Greenpeace has urged a 70 percent reduction in emissions from 2010 levels, while the World Resources Institute and other American advocates have pushed for around 50 percent.

That puts Mr. Kerry in a tricky position. More ambitious targets would give him more leverage over other countries ahead of the next global climate talks, set for November in Glasgow. But setting targets for domestic emissions reductions will not be so simple politically, especially with a split Senate.

How will the United States deal with China? 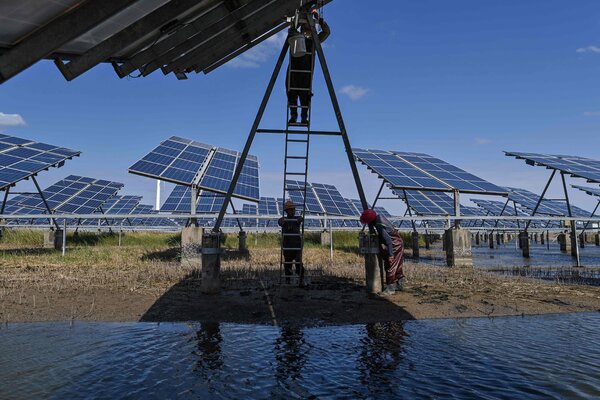 Climate may be one of the few areas of cooperation in an increasingly tense relationship between Washington and Beijing. The two countries are the world’s largest emitters and the world’s largest economies, and without ambitious steps from both, there is no way the world can slow down warming.

Mr. Podesta said the Biden administration would need to create “a protected lane in which the other issues don’t shut down the conversation on climate change.”

China is also ahead in some ways. Its president, Xi Jinping, said last September that Beijing was aiming to be carbon neutral by 2060, which means it plans to either capture its carbon emissions or offset them by buying credits for green projects like tree-planting programs.

Mr. Kerry has described China’s 2060 target as “not good enough.”

Not for nothing have Mr. Kerry’s first overtures as climate envoy been to European leaders. His best chance of putting pressure on Beijing is to do it alongside the world’s other big economy: the European Union.

What leverage does the United States have?

Mr. Kerry has repeatedly said he intends to “raise ambition” by all countries. The United States has at its disposal a few diplomatic sticks and carrots.

Mr. Kerry could use a bilateral United States-Mexico trade agreement, for instance, to persuade Mexico to open up to American investment in clean energy projects. He could encourage private U.S. investment to encourage India to move away from coal and accelerate renewables.

And he could channel United States development aid to help countries pivot to a green economy — not something Washington is known for, as Kelly Sims Gallagher, a former Obama administration official, pointed out.

Climate advocates have called on the Biden administration to ensure that development aid is channeled to help vulnerable countries adapt to climate change and to work with allies in Europe to encourage developing countries to build clean energy projects instead of polluting coal plants.

Few details have emerged from the White House about how to use American money to advance climate goals abroad. Mr. Kerry has said only that the United States, having reneged on a $2 billion pledge to the United Nations-backed Green Climate Fund, would “make good” on its financial commitment to help vulnerable countries deal with climate risks.

How will U.S. alliances with oil-producing countries change?

The elephant in the room in a climate-focused White House is what to do about American relations with Saudi Arabia.

The geopolitics of energy had already been changing. The United States had steadily become less dependent on oil from the Middle East, thanks to the shale boom at home. A climate-focused White House stands to accelerate the change.

“We do have an opportunity to rethink and reset our relationships in the Middle East because of that,” Dr. Gallagher said. “Climate change is an additional factor.”

No sooner had Mr. Biden been elected than Saudi Arabia’s crown prince unveiled plans for a car-free city.