A law firm boss appears in the bedroom of a junior female employee during a work trip dressed only in his underwear. An IT company sales representative tells a colleague he will be thinking about her legs “wrapped around me all day long”. A construction worker tells a female co-worker: “I am going to follow you home, rip your clothes off and rape you.”

These are real incidents documented in Australian workplace sexual harassment cases – but most cases will be settled quietly, and covered by non-disclosure agreements. 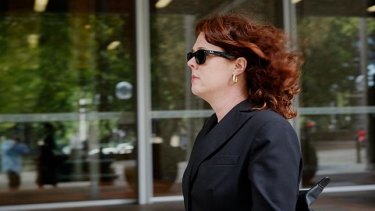 Rebecca Richardson sued her former employer, Oracle, after she was sexually harassed by a colleague.Credit:Jim Rice

In a Federal Law Review article released this month, Australian National University law student Madeleine Castles and lawyers Tom Hvala and Kieran Pender, who is affiliated with the Global Institute for Women’s Leadership at the ANU, track the impact of a landmark 2014 court decision involving a former executive at software giant Oracle, Rebecca Richardson, who was subjected to a campaign of sexual harassment by a colleague, Randol Tucker.

Among more explicit comments, Mr Tucker suggested the two should go away on a “dirty weekend” and said “I love your legs in that skirt. I’m going to be thinking about them wrapped around me all day long.”

In 2013, the Federal Court awarded Ms Richardson $18,000 in damages for non-economic loss, namely hurt, humiliation, pain and suffering. She appealed, and in 2014 the Full Federal Court found this sum was “manifestly inadequate” and “out of step” with community standards. It awarded her $100,000, plus $30,000 for economic loss. 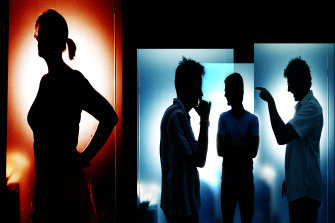 Since 2015, there have been just over 10 workplace sexual harassment cases under the Sex Discrimination Act that have proceeded to a court decision.Credit:Louie Douvis

The decision was expected to result in a sharp increase in damages for pain and suffering in workplace harassment cases, which are brought under the Commonwealth Sex Discrimination Act.

But it is still relatively uncommon to see such a case in the courtroom. Under the formal process, a complainant must first lodge a sexual harassment complaint with the Australian Human Rights Commission, and a court case may follow if a confidential conciliation process fails. Complaints may also be made outside this legal process, including internally.

Joydeep Hor, managing partner of law firm People + Culture Strategies, said in his experience less than 10 per cent and “probably less than 5 per cent of cases” – initiated in a variety of ways, including via an internal complaint – would go to a court hearing.

In some cases a business might settle for “three, four, five times what would be the [damages] outcome that even in a worst-case scenario might be awarded against them in court”, he said.

Mr Hor typically acts for employers but said as a general rule both parties might prefer to settle a matter outside court to achieve a swifter resolution and to maintain confidentiality. Inside a court “you lose control of the outcome on both sides”, he said.

The authors of the Federal Law Review Study conducted a review of all harassment decisions following Ms Richardson’s case and concluded that it appeared to have had an “enduring influence in recalibrating damages” for pain and suffering. Their interviews with a range of employment lawyers suggested the same was true in a settlement context.

But in relative terms the damages awarded by courts for harassment “are, and have been, low”.

“One explanation is that the pain and suffering occasioned as the result of the conduct is devalued –comparative to compensation in other areas of law – precisely because the conduct is sexual,” the authors say.

In a 2013 Victorian Supreme Court case, a woman received $300,000 in damages for non-economic loss after she was bullied, but not sexually harassed, by a male manager, including an incident in which he threw a book at her.

In 2001 the Federal Court awarded a woman $15,000 for hurt and distress after her boss, a doctor, subjected her to a campaign of extreme sexual harassment, including unwanted touching and asking her “to tell him if I got raped or anything so that he could join in”. She was 17 years old.

The discrepancy in damages is “startling”, the authors say.

Ms Castles, a co-author of the article, told The Sydney Morning Herald and The Age that damages for pain and suffering “should be comparable across different fields of law”. The paper highlighted an apparent gulf between damages in harassment cases and in other areas, including in defamation cases where awards of more than $100,000 for non-economic loss are not uncommon.

“Why is loss of reputation being valued at a higher level than the hurt, humiliation, pain and suffering caused by sexual harassment?” Ms Castles said.

In 2019, the Federal Court ordered the head of a boutique NSW law firm to pay $170,000, including $120,000 for hurt and distress, after subjecting a junior female employee to “relentless” harassment, including blocking her path and demanding hugs, and appearing in her bedroom during a work trip dressed in a singlet and boxer shorts. He lost a Full Federal Court appeal.

In a 2015 Victorian case, a female construction worker who endured extreme bullying and sexual harassment on work sites was awarded $1.36 million in damages including $380,000 for hurt and distress and larger sums for economic loss.

The Victorian Supreme Court heard that one male co-worker told the woman that “anything that bleeds once a month should be shot”. Another threatened to follow her home and rape her.

While the damages were significant, the authors say the law is “ill-equipped to bring about systemic change” because it places the burden of enforcing the law, involving considerable time, cost and risk, on the shoulders of an individual.

“We hope policymakers can use our research findings to inform reform that will improve the lived experiences of those who experience sexual harassment and empower them to seek legal remedies,” said Mr Pender, a co-author.

Catch all the day’s breaking news