All the Presidents’ Ma’am! How the Queen has charmed 13 occupants of the White House (and their wives) and helped to keep the ‘special relationship’ alive

First conceived by Winston Churchill after the end of World War II, it has been at the heart of British foreign policy ever since: our ‘special relationship’ with the United States.

But no one has done more for this great trans-Atlantic alliance than the woman who has known a staggering 13 occupants of the White House.

Indeed, as I explain in my latest book, Queen Of The World, there is nobody in either Britain or the U.S. who can claim to have met, conversed and dined with 12 serving U.S. Presidents — plus a retired one (Herbert Hoover).

She has hosted most of them, too, and today will welcome Donald Trump at Buckingham Palace. It is their second meeting, yet presidential visits here were few and far between before the invention of the jet engine. 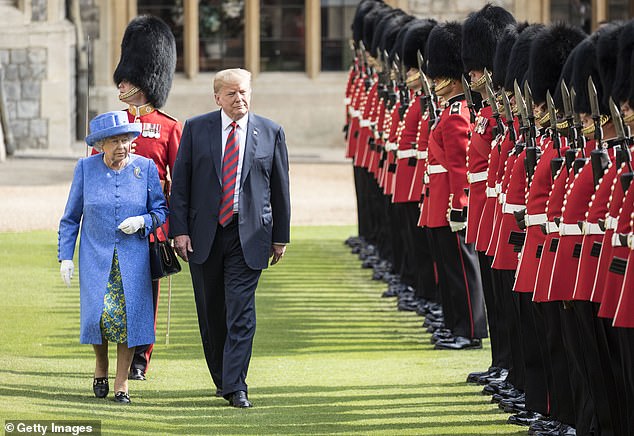 The Palace entertained its first U.S. President in 1918, when Woodrow Wilson met George V at the end of World War I. But it would not be until 1961 that another president came through the gates.

That was John F. Kennedy, on a flying visit (The Queen had met Hoover, Truman and Eisenhower by then but JFK was her first palace visitor). He was accompanied by the First Lady, Jackie Kennedy, for a private dinner. The Queen would never see JFK again.

His assassination touched her deeply at the time when she was heavily pregnant with Prince Edward.

Doctors advised her against attending the national memorial service at St Paul’s, so she held her own at Windsor and invited 400 U.S. servicemen.

She would take a close personal interest in the Kennedy memorial, erected nearby at Runnymede, and made a stirring speech at its inauguration, saluting a man who ‘championed liberty in an age when its very foundations were being threatened’.

Prince Philip held the hand of John Junior — the little boy who moved the whole world by saluting his father’s coffin at the funeral in Washington DC in November 1963. 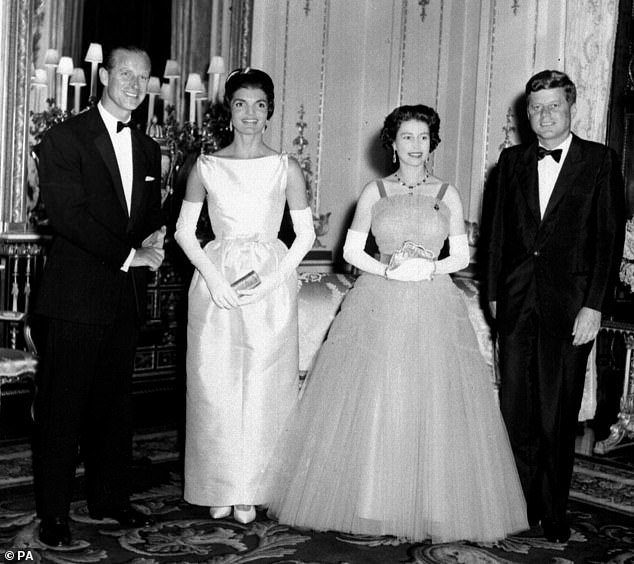 The Queen has met with 13 sitting US presidents, including John F. Kennedy and his wife Jackie in 1961

Hence the added poignancy when that same four-year-old gave a respectful bow to the Queen.

Britain’s decision to stay out of the Vietnam War led to a cooling between London and Washington, so the Queen’s path never crossed that of Kennedy’s successor, President Lyndon B Johnson.

But it was the Queen who helped soothe any bilateral bruising when she invited Johnson’s successor, Richard Nixon, to lunch during his visit to London in 1969.

‘Both my daughters follow you very closely,’ the President joked with Prince Charles.

Gerald Ford was in the White House when the Queen crossed the Atlantic to mark the bicentenary of the U.S. Declaration of Independence. It was, though, under President Ronald Reagan that the relationship would be as ‘special’ as it had been at any stage since D-Day — thanks again to that personal touch of the monarch. 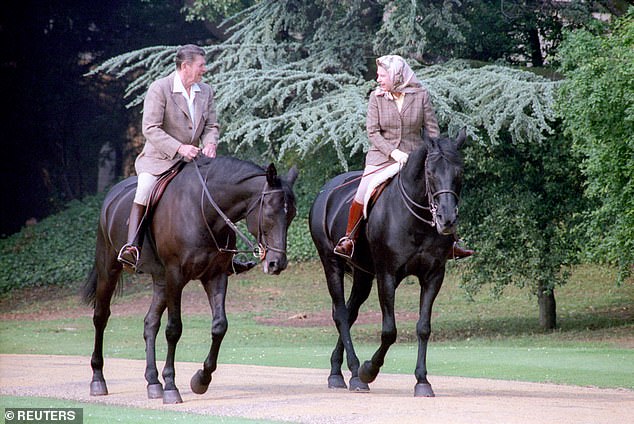 Ronald Reagan was very comfortable on a horse when he visited, a skill that would lead to one of the most celebrated photographs of the Queen’s reign

Reagan was very comfortable on a horse, a skill that would lead to one of the most celebrated photographs of the Queen’s reign when the world’s press arrived at Windsor to see the two heads of state on horseback.

Reagan enjoyed some cheerful banter with the photographers.

‘If you stand still, I’ll take it over the top [of you],’ he yelled from astride Centennial.

The Queen set off on Burmese, her Canadian mare, with Reagan in hot pursuit, followed by teams of bodyguards on four legs and four wheels.

Reagan became the first U.S. President to address both Houses of Parliament.

The White House had wanted him to address MPs and peers in Westminster Hall, the great hammer-beamed medieval chamber. However, use of the hall would require cross-party support, and the Labour leader, Michael Foot, would not agree.

The then prime minister, Margaret Thatcher, duly arranged for the Royal Gallery to be used and it was a tour de force by Reagan, the former Hollywood actor with the common touch. He joked that when he had dined with Mrs Thatcher beneath a portrait of George III at the British Embassy in Washington, she had urged him to let ‘bygones be bygones’.

Later as 158 guests gathered for a banquet in St George’s Hall, Windsor, the Queen had a George III joke, too, as she recalled the warmth of her reception during the bicentenary: ‘Had King George III been able to foresee the long-term consequences of his actions, he might not have felt so grieved about the loss of his colonies.’

Of all the U.S. presidents, George Bush Senior was closest to the Queen in age. Like her (and Prince Philip), he served in World War II.

By then, two seismic events had taken place. The Royal Family had been through the maelstrom of the Nineties, culminating in the death of Diana, Princess of Wales in 1997. There were few places where Diana’s star had shone brighter than in the U.S. And four years later, the U.S. endured the worst terrorist attack in its history: 9/11. Tony Blair had been the first world leader to visit Washington after the attacks.

The morning after the atrocities, the Queen ordered the Union flag on Buckingham Palace to be lowered to half-mast and asked the band to play the Star-Spangled Banner during Changing the Guard. As former President Bill Clinton reflected later: ‘It took my breath away. It was wonderful. It was something I will never forget.’

Against this backdrop, George W. Bush’s state visit was always going to be congenial, regardless of the (smaller-than-expected) protests against the Iraq War. 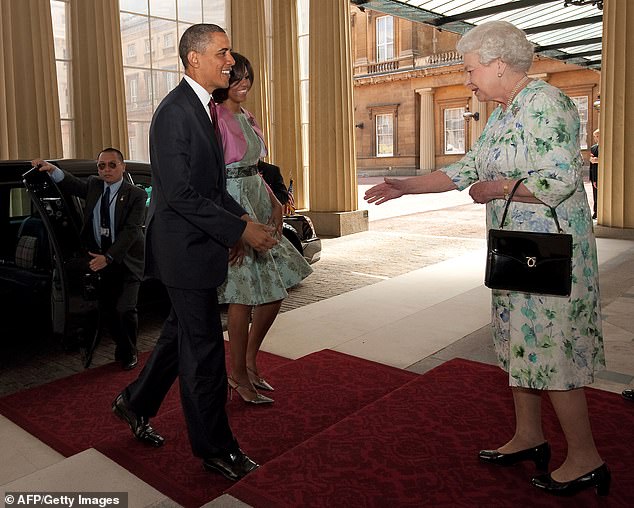 That evening, after they’d dined on halibut, chicken and praline ice cream at the Buckingham Palace state banquet, the Queen saluted: ‘the depth and breadth of our partnership’.

The return dinner the next night according to then Foreign Secretary Jack Straw, was an ‘intimate affair’ for around 60 guests at the U.S. Ambassador’s residence, Winfield House in Regent’s Park. Tortillas, lamb and fudge brownies were served and Andrew Lloyd Webber provided entertainment.

Straw added that his wife, Alice, found herself having one of those ‘I’m sure we’ve met before’ conversations with a familiar-looking guest. ‘I’m Michael Caine,’ he replied.

With the arrival of the next occupant of the Oval Office, the gloss on the relationship appeared to be in danger of fading.

There were early reports that Barack Obama had evicted the bust of Winston Churchill from the White House (not entirely true; there had been two busts and he returned one). Inevitably, it was the custodian-in-chief of

the ‘special relationship’ who turned things round. 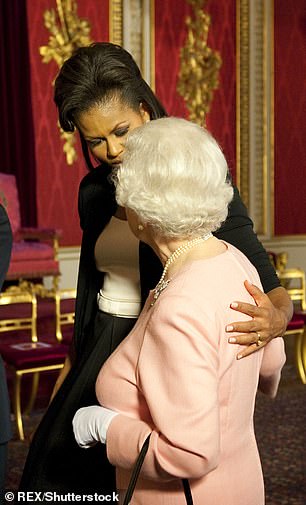 Cameras picked up a ‘faux pas’ moment, when Michelle Obama was seen to put her arm around the Queen in 2009

The Obamas enjoyed their first royal encounter when they arrived in London in 2009 for the G20 summit. During the reception that followed, cameras picked up a ‘faux pas’ moment, when Michelle Obama was seen to put her arm around the Queen.

In fact the Queen simultaneously put her arm around the U.S. First Lady, too. It turned out they’d been swapping notes about heel sizes.

A while later, when Michelle Obama and her daughters paid a private visit to London, the Queen gave them a private tour of the Palace.

In Spring 2011, the Obamas returned on a state visit. After the welcome lunch, the Queen showed the couple a special display of American-themed treasures from the Royal Collection. It included George III’s handwritten lament after the loss of the American colonies: ‘America is lost!’

Mr Obama laughed and said: ‘That was just a temporary blip in the relationship!’

There was no shortage of glamour that evening at the Queen’s state banquet.

What sticks in Lord Hague’s mind most of all, however, was the Queen’s announcement that it was bedtime.

‘When the Queen said it was time for the whole thing to be over — it was only teatime for Obama, being jet-lagged — he said: “Is she serious?” But off they all went.

‘The President of the United States would probably not defer to anyone else in the world!’

Five years later, as the Queen celebrated her 90th birthday, a huge helicopter landed outside Windsor Castle. Family aside, the first people who had come to extend their best wishes in person were Barack and Michelle Obama.

‘It wasn’t certain that America and Britain would be as close under Obama as it turned out to be,’ the then Prime Minister David Cameron would later comment.

That they were, he says, was down to that pivotal figure at the heart of the relationship. Today, at the age of 93, she will do it all over again.