More than 3,000 members of Minnesota National Guard are activated as hundreds march through Minneapolis as George Floyd jury retires to consider its verdict amid fears of nationwide violence

The National Guard activated more than 3,000 troops as the Derek Chauvin jury retired and hundreds marched through Minneapolis on Monday demanding justice for George Floyd.

Closing arguments were heard Monday in Chauvin’s trial with a prosecutor telling jurors that the officer ‘had to know’ he was squeezing the life out of George Floyd as he cried over and over that he couldn’t breathe and finally fell silent.

Following the arguments, the jurors retired to deliberate as demonstrators took to the streets of Minneapolis.

Demonstrators gathered outside the Hennepin County courthouse, which is surrounded by high fences and concrete barricades topped with barbed wire.

National Guard troops have been deployed by the hundreds in anticipation of the verdict. The Minnesota National Guard activated more than 3,000 guardsmen to assist Minneapolis law enforcement as a precaution.

Meanwhile, the Biden administration is privately weighing how to handle the upcoming verdict in the trial. 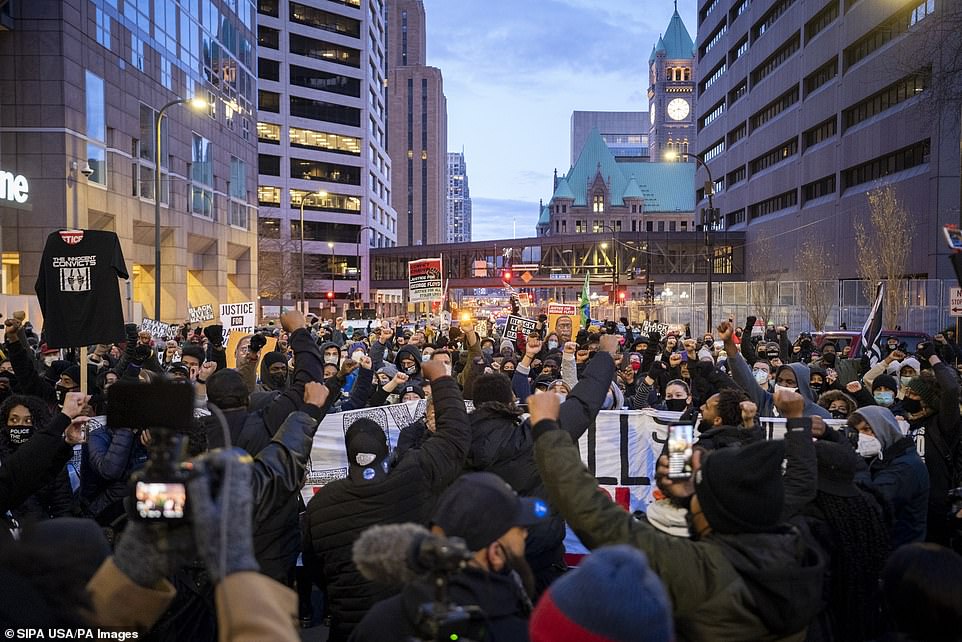 Protesters gathered in Minneapolis on Monday as the jury started their deliberations toward a verdict in the case against Derek Chauvin, who faces murder and manslaughter charges in the death of George Floyd 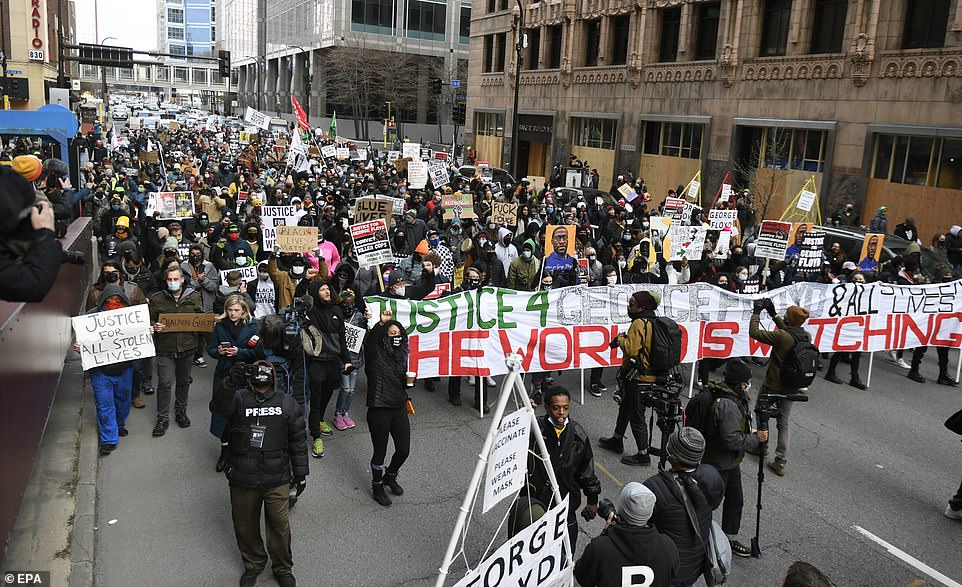 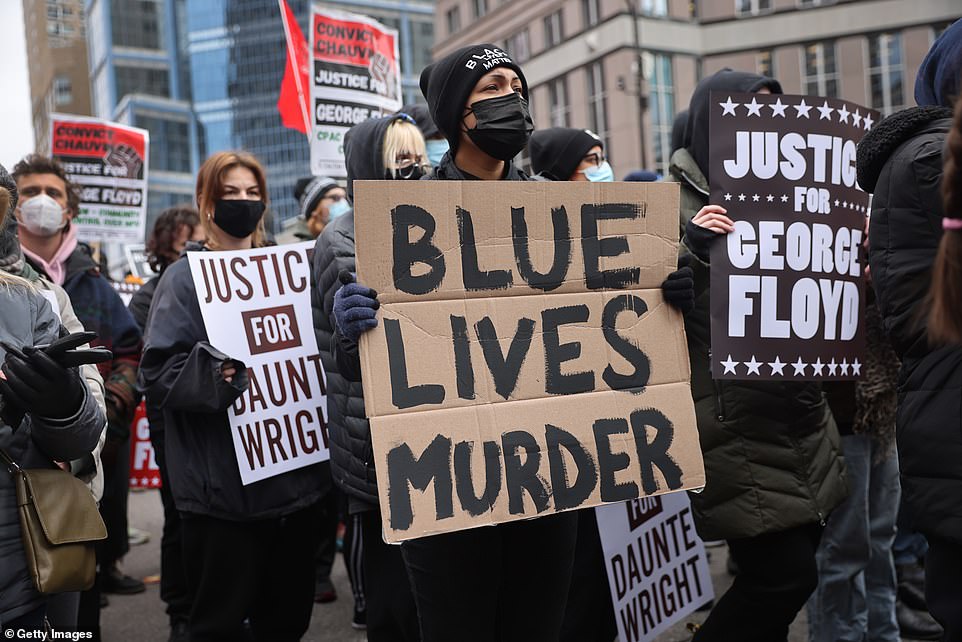 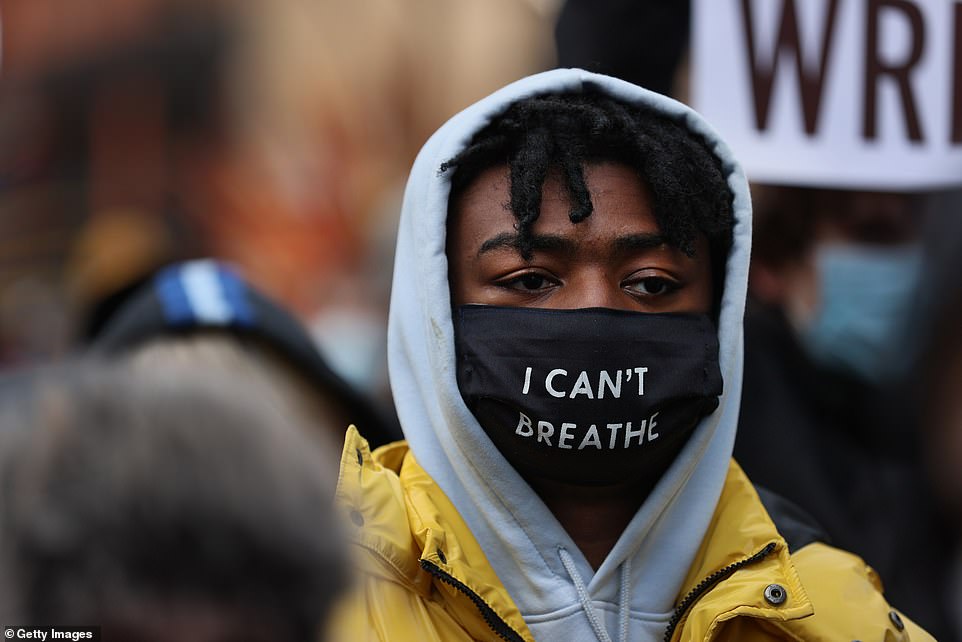 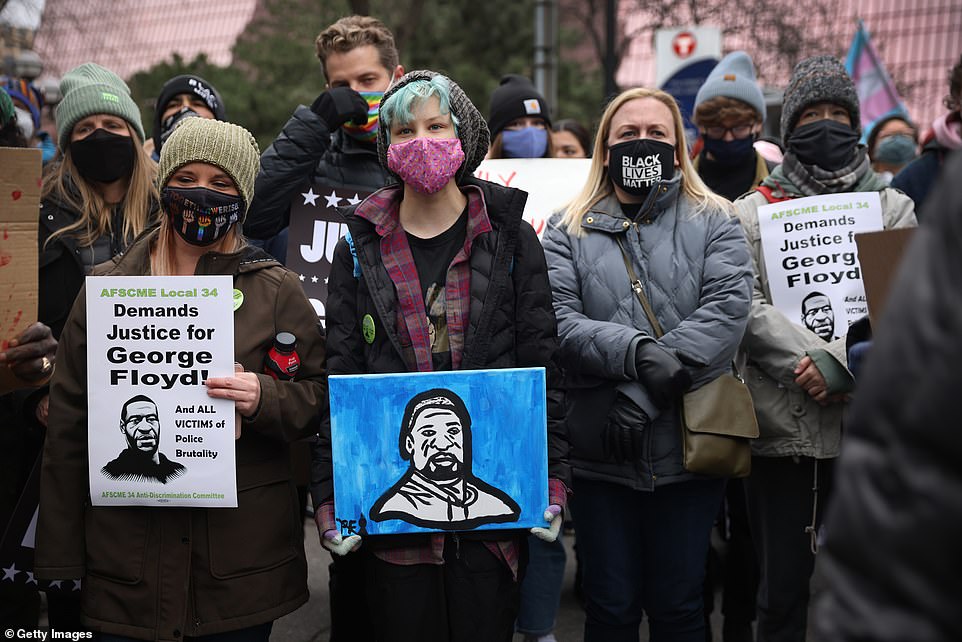 The White House has been warily watching the trial proceed in Minneapolis and is preparing for the possibility of unrest if a guilty verdict is not reached in the trial.

President Joe Biden may also speak if a guilty verdict is handed down, the White House aides said.

The verdict – and the aftermath – will be a test for Biden, who has pledged to help combat racism in policing, helping African Americans who supported him in large numbers last year in the wake of protests that swept the nation after Floyd’s death and restarted a national conversation about race.

But he also has long projected himself as an ally of police, who are struggling with criticism about long-used tactics and training methods and difficulties in recruitment.

Press secretary Jen Psaki said Monday that the White House has had a ‘range of conversations’ about preparations for the upcoming verdict and added: ‘Our objective is to ensure there is space for peaceful protest.’

‘Of course we’ll let the jury deliberate and we’ll wait for the verdict to come out before we say more about our engagements,’ Psaki said.

Psaki said administration officials have been in contact with leaders in Minnesota and in other cities and states that saw unrest after Floyd’s death last year.

She declined to answer if Biden would be ‘disappointed’ if a not guilty verdict was reached. 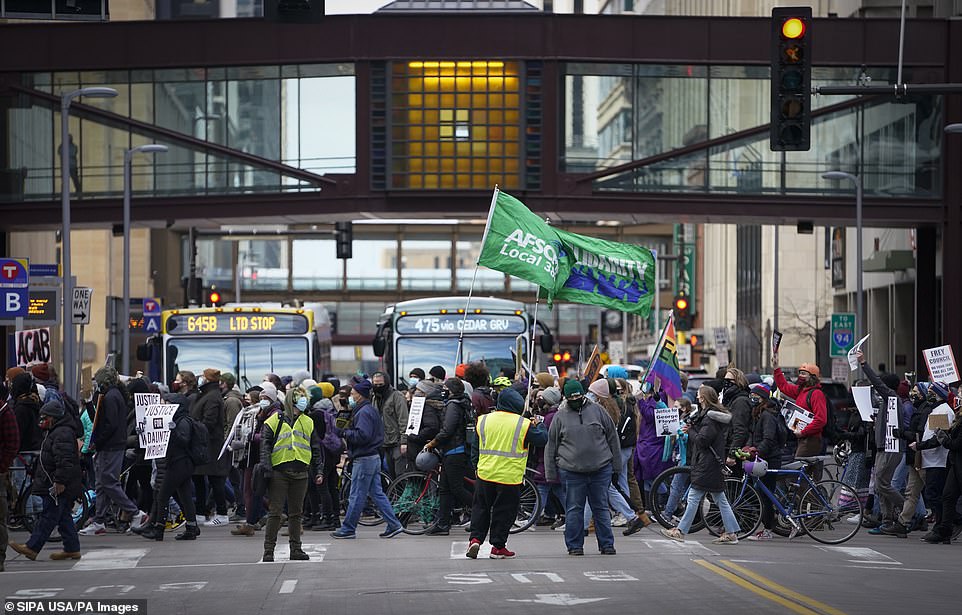 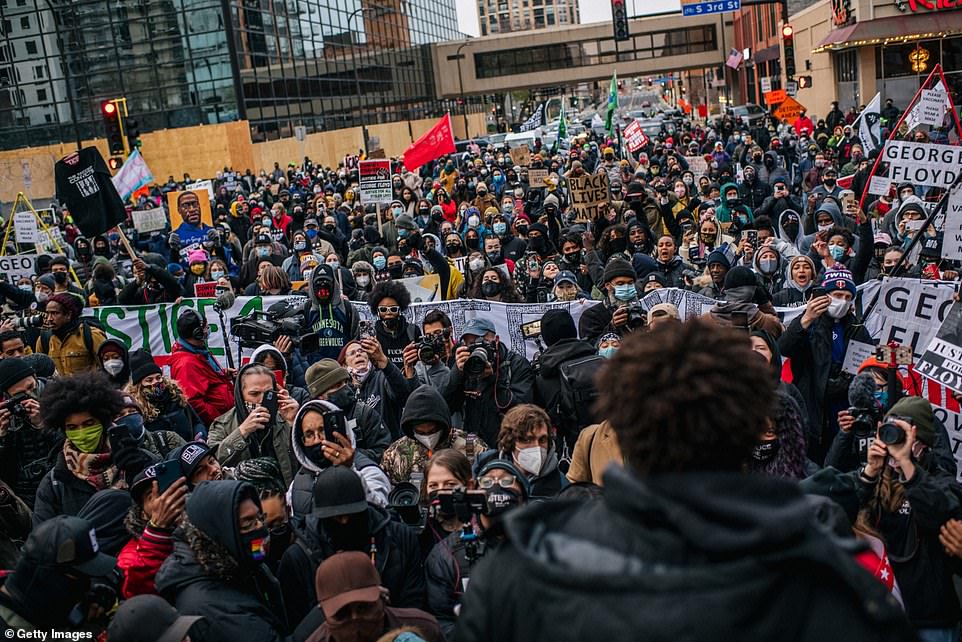 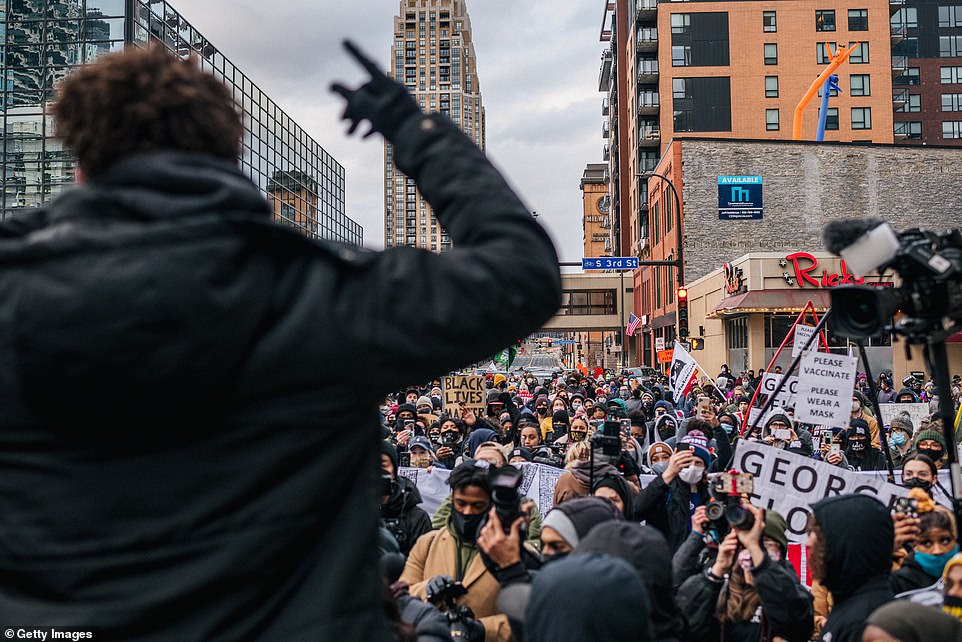 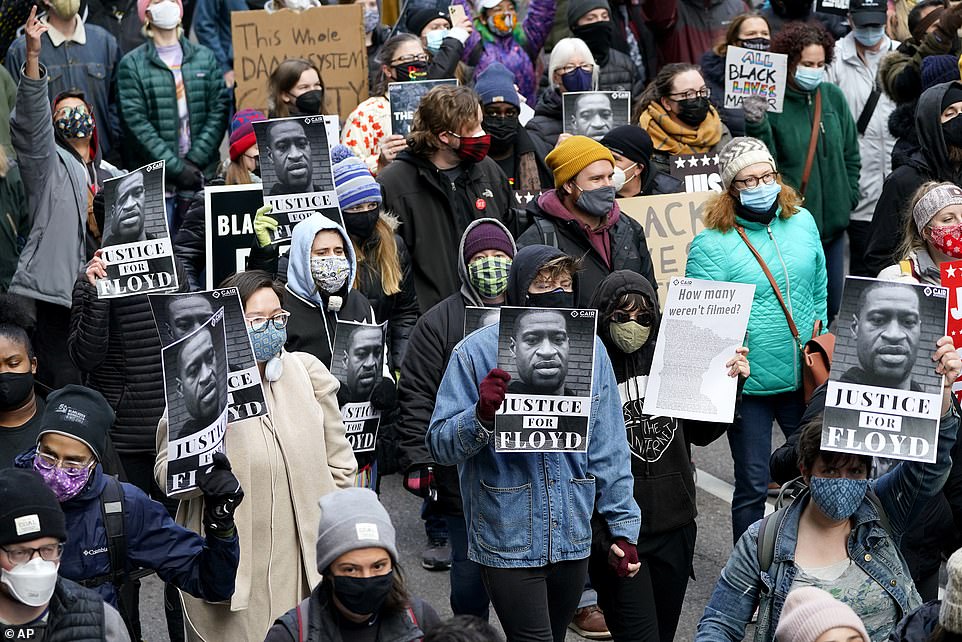 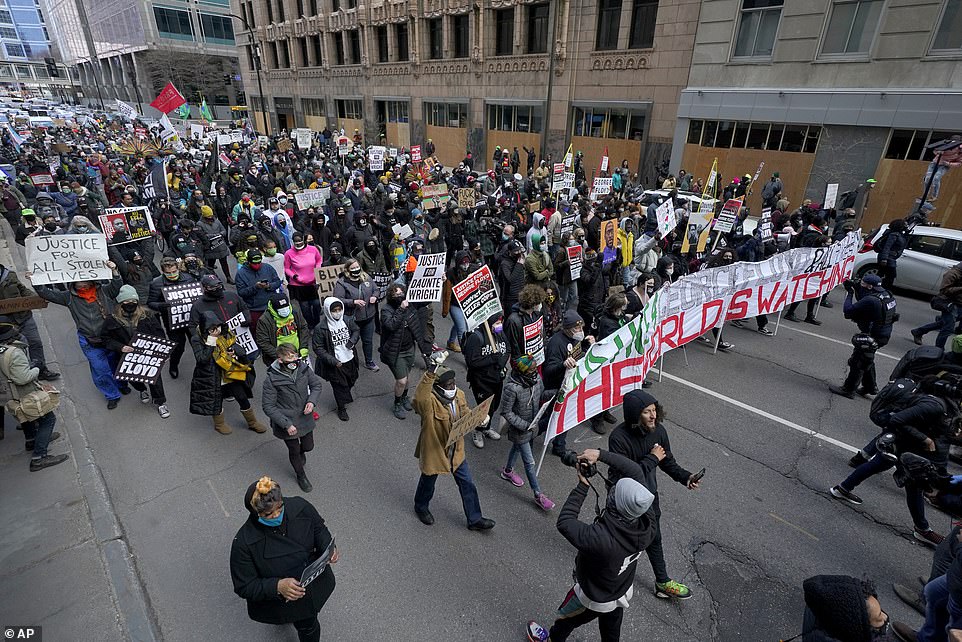 Hundreds marched through the streets of Minneapolis on Monday 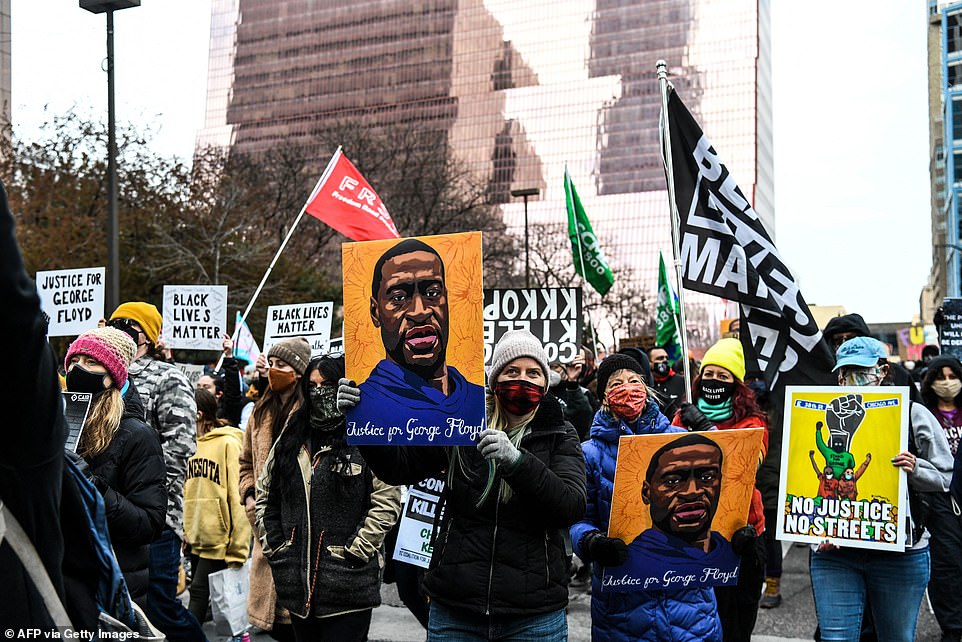 People hold placards as they protest outside of the courthouse during the trial of former Minneapolis police officer who is charged with murdering Floyd in Minneapolis, Minnesota on Monday 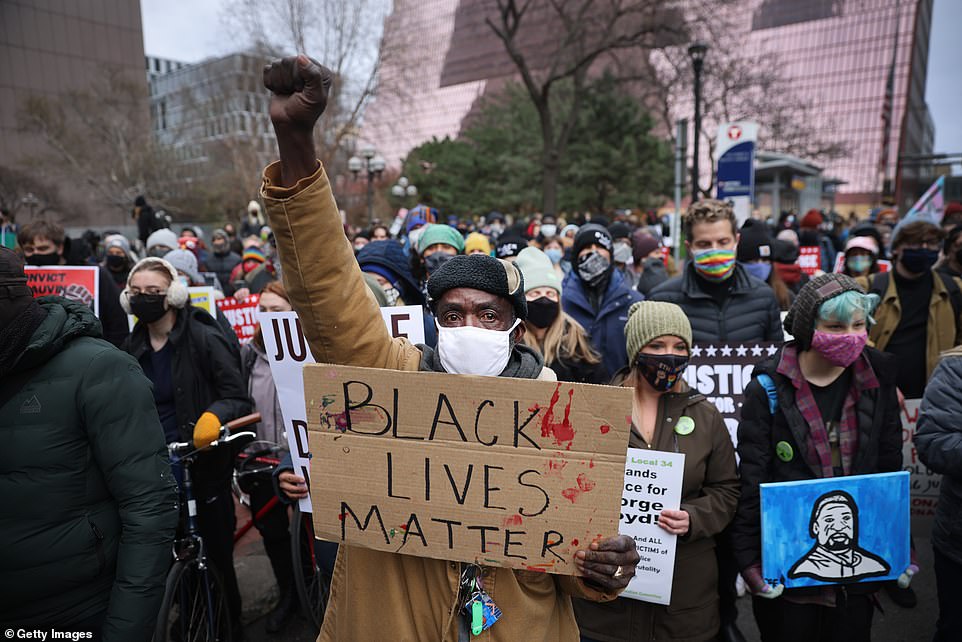 Demonstrators protest near the Hennepin County Courthouse on Monday in Minneapolis, Minnesota 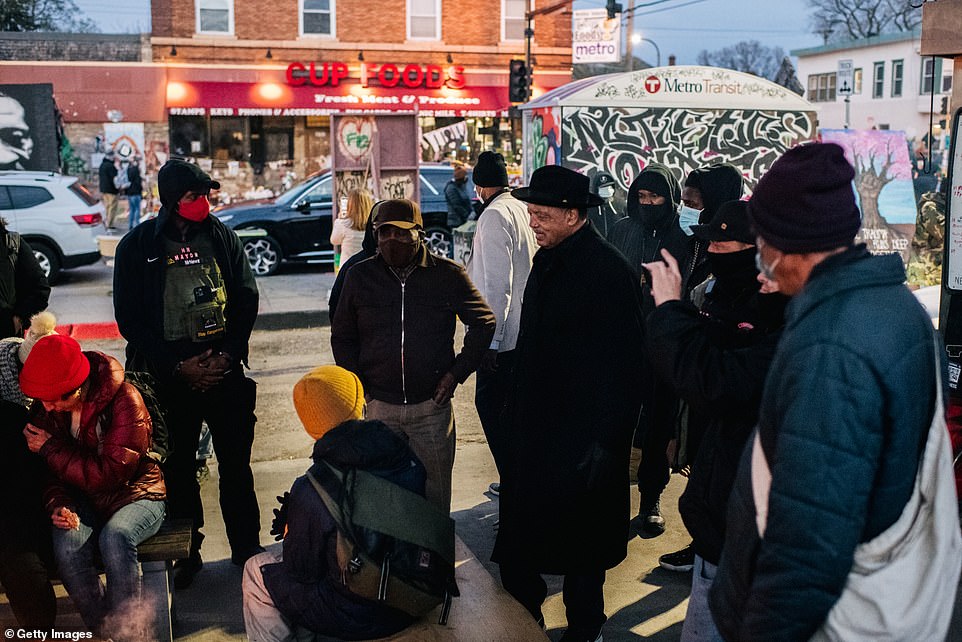 The FBI and the US attorney’s office in Minnesota have been working with local officials to support law enforcement as they prepare for the possibility of unrest after the verdict, officials said.

The official could not discuss the plans publicly and spoke to the AP on condition of anonymity.

The officials, part of the Justice Department’s Community Relations Service, tout themselves as ‘America’s Peacemaker’ by mediating disputes in communities and holding listening sessions to help prevent future conflicts.

A federal civil rights investigation, separate from the trial, remains ongoing. Several witnesses were subpoenaed earlier this year to appear before a federal grand jury considering charges against Chauvin.

The Justice Department’s civil rights investigation has been focused on Chauvin and some of the witnesses, including other officers who worked with Chauvin, people familiar with the matter have told the AP.

Barr rejected the deal in part because he felt it was too soon, as the investigation into Floyd’s death was still in its relative infancy, law enforcement officials said.

Across the country, police departments are also preparing for the possibility of rioting or other unrest, with some canceling vacation time and increasing the number of officers available for shifts.

The federal government hasn’t detailed its plan in the event of widespread or sustained civil unrest.

Pentagon spokesman John Kirby said Monday that there has been a request from officials in Washington, DC, for DC National Guard forces in the event there is civil unrest in the nation’s capital, and it is currently being reviewed by the Army.

He said the Army secretary has the authority to approve any request for DC National Guard but did not have details on the request.