A powerful Hurricane Iota made landfall on the coast of Nicaragua late Monday, sparking warnings of a life-threatening storm surge and flash flooding in a region recently battered by Hurricane Eta.

The hurricane made landfall as a Category 4 storm along the coast of Northeastern Nicaragua at 10:40 pm EST Monday. Iota had sustained winds near 155 mph, according to the National Hurricane Center, which described the storm as “extremely dangerous.”

Iota became a Category 5 hurricane earlier on Monday, before weakening to a Category 4 prior to landfall.

The hurricane made landfall approximately 15 miles south of where Hurricane Eta made landfall on Nov. 3, sparking concern about its impact in regions already devastated by Eta. 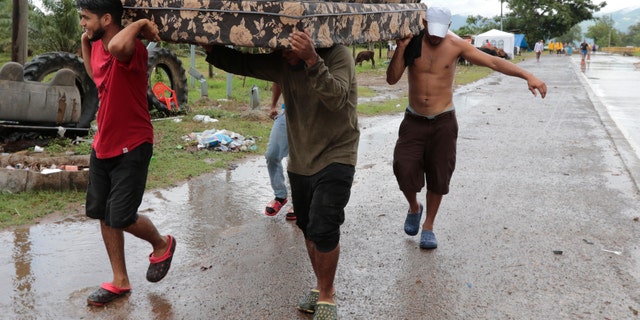 “This hurricane is definitely worse” than Eta, Jason Bermúdez, a university student from Bilwi, said as winds roared before Iota came ashore. “There are already a lot of houses that lost their roofs, fences and fruit trees that got knocked down,” said Bermúdez. “We will never forget this year.”

Business owner Adán Artola Schultz braced himself in the doorway of his house as strong gusts of wind and rain brought water in torrents down the street. He watched in amazement as wind ripped away the metal roof structure from a substantial two-story home and blew it away like paper.

“It is like bullets,” he said of the sound of metal structures banging and buckling in the wind. “This is double destruction,” he said, referring to the damages wrought by Eta just 12 days earlier. “This is coming in with fury,” said Artola Schultz.

Forecasters warned that Iota's storm surge could reach 15 to 20 feet (4.5 to 6 meters) above normal tides. 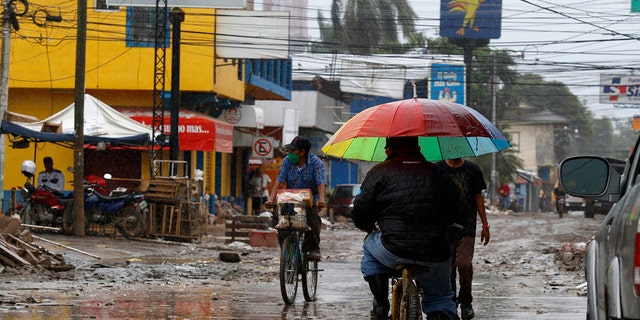 Locals move on street barely cleared from the debris of the last storm, before Hurricane Iota makes landfall in La Lima, Honduras, Monday, November 16, 2020. Hurricane Iota rapidly strengthened Monday into a Category 5 storm that is likely to bring catastrophic damage to the same part of Central America already battered by a powerful Hurricane Eta less than two weeks ago. (AP Photo/Delmer Martinez)

Iota is the record 30th named storm of this year’s extraordinarily busy Atlantic hurricane season. It’s also the ninth storm to rapidly intensify this season, a dangerous phenomenon that is happening increasingly more often. Such activity has focused attention on climate change, which scientists say is causing wetter, stronger and more destructive storms.

The official end of the hurricane season is Nov. 30.

The Associated Press contributed to this article.