Working in sub-zero temperatures in a Buddhist holy cave high on the Tibetan Plateau, researchers from Australia have unearthed a cache of stone tools, animal bones and DNA from the Denisovans – modern humans' most mysterious ancestor.

Cousins of the neanderthals, Denisovans contributed about 5 per cent of Aboriginal Australians' DNA, yet we have never found a single complete fossil – just fragments of finger and jaw. 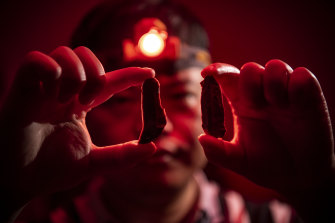 Professor Bo Li from University of Wollongong with some of the stone artifacts he found. Professor Li was part of the team of archaeologists who worked on the Tibetan cave dig.Credit:Wolter Peeters

We know only that they lived across Asia between 45,000 and 400,000 years ago, often at altitudes that most modern humans could not survive. Modern humans encountered them some time after we left Africa. And then they disappeared, leaving almost no trace.

In 2019 archaeologists tentatively linked a fragment of jawbone found in the cave to the Denisovans. But many experts were sceptical; there was no DNA proof.

Now the researchers are back with a new report in Science, backed by a team of Australian specialists. And this time they have DNA. 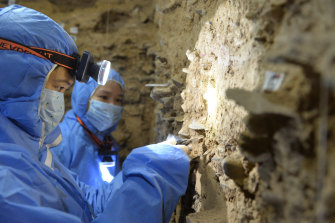 Researchers had access to the site for only a few days, in the middle of night in sub-zero temperatures.

The study also proves a new way of doing archaeology: rather than look for fossils, ancient human DNA can now be pulled from the earth.

Recent research suggests our family tree has many branches – and they fold back on themselves and intermingle.

Modern humans left Africa perhaps 200,000 years ago. But they did not head into terra nullius. The world was already teeming with other species of humans, from neanderthal and Denisovans to the hobbit-like Homo floresiensis found in Indonesia.

The dawn of genetics has allowed scientists to discover their genes living on inside our own genomes. 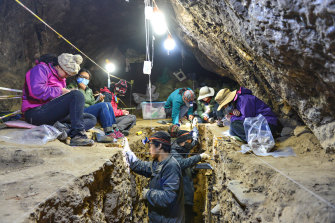 Modern Tibetans, for example, have a Denisovan gene that lets them thrive at high altitude.

"When our species exited Africa, on the way to moving to Australia, we met Denisovans somewhere in Asia, interbred with them, and carry some of the genetic information," said the University of Wollongong's Associate Professor Bo Li, the team's dating specialist.

Now all those species of protohuman are gone.

"Why did we survive, when all other species became extinct? What made us so special?" said Professor Westaway.

The more than 160,000-year-old jawbone fragment was unearthed from the Baishiya Karst Cave, in the base of a white cliff that stands 3280 metres above sea level.

It is now a sanctuary for Buddhist monks. They allow archaeologists in for only a few days a year – at night, in the middle of winter, when the temperature drops to minus 18 degrees.

Earlier this year Professor Li's team dug into the cave's frozen floor, unearthing hundreds of bones from slaughtered gazelles, foxes and rhinoceros, and crude stone tools – but no human fossils.

However, they did not need fossils. Humans drop DNA everywhere they go, in their saliva, skin flakes and faeces. In frozen soil some DNA can survive for millennia.

Using a delicate new technique researchers liken to "DNA-fishing", the researchers managed to extract Denisovan DNA from four sediment layers dated between 45,000 and 100,000 years ago. 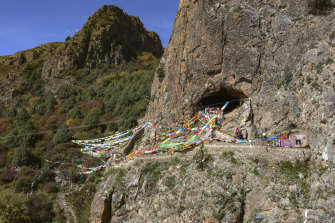 "But how much can you trust that? That's still a big question mark, because it's a new technique," said Dr Sally Wasef, an ancient DNA specialist at Griffith University. "You worry about how the DNA will travel in the soil and if there is any contamination."

The Denisovans left almost no known fossil record. But if we can pull their DNA from the dirt, we may now discover them anywhere.

"This really does open up new possibilities," said Associate Professor Mike Morley, a geoarchaeologist at Flinders University. "It could even be that Denisovan fossils are sitting in museums across the world – we simply don't know what a Denisovan fossil looks like."