Delhi: After gifting and selling tens of millions of COVID-19 vaccine doses abroad, India suddenly finds itself short of shots as new infections surge in the world’s second-most populous country.

India breached 200,000 daily infections for the first time on Thursday, and is trying to inoculate more of its population using domestically produced shots.

Facing soaring cases and overflowing hospitals after lockdown restrictions were eased, it also abruptly changed the rules to allow it to fast-track vaccine imports, having earlier
rebuffed foreign drugmakers like Pfizer. 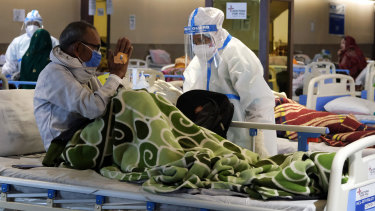 A health workers in personal protective equipment assists a patient at a makeshift COVID quarantine facility set up in a banquet hall in Delhi, India,Credit:Bloomberg

It will import Russia’s Sputnik V vaccine starting this month to cover as many as 125 million people.

The reversal in fortunes could hamper not only India’s battle to contain the pandemic, but also vaccination campaigns in more than 60 poorer countries, mainly in Africa, for months.

The COVAX programme, backed by the World Health Organisation and Gavi vaccine alliance, aims at equitable vaccine access around the world, and is relying heavily on supplies from India, Asia’s pharmaceutical powerhouse. 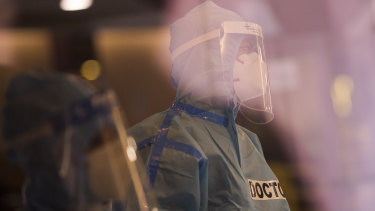 A doctor is seen at a quarantine center for COVID-19 coronavirus infected patients at a banquet hall that was converted into an isolation center to handle the rising cases of infection in Delhi, India. Credit:Getty

But so far this month India has only exported around 1.2 million vaccine doses. That compares with 64 million doses shipped abroad between late January and March, according to data from the foreign ministry.

An official with knowledge of India’s vaccine strategy said that available shots would be used domestically while the country faced an “emergency situation”.

“There is no commitment to other countries,” he said.

India’s foreign ministry, which oversees vaccine deals with other countries, said last week that Indian demand would dictate the level of exports.

Resulting shortages are already being felt in some countries in the COVAX scheme, and a UN health official involved in the vaccine rollout in Africa said: “To be so reliant on one manufacturer is a massive concern.” 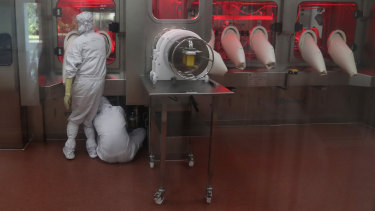 Employees operate a filling machine inside a laboratory at the Serum Institute of India in Pune, India.Credit:AP

The director of the Africa Centres for Disease Control and Prevention, John Nkengasong, said earlier this month delays in supplies from India could be “catastrophic”.

Four sources involved in discussions on vaccine supplies and procurement said factors including delays by India and COVAX in placing firm orders, a lack of investment in production, raw material shortages and underestimating the coronavirus surge at home had contributed to vaccine shortages.

The Serum Institute of India (SII), the world’s biggest vaccine manufacturer, had vowed to deliver at least 2 billion COVID-19 shots to low and middle-income countries, with nearly half of that by the end of 2021.

But it has also come under pressure to meet the needs of other governments, including Britain, Canada and Saudi Arabia, amid AstraZeneca’s global production problems.

The United States, meanwhile, ring-fenced the supply of key equipment and raw materials for its own vaccine makers, limiting SII’s operations and delaying by months its goal of raising monthly output to 100 million from up to 70 million now, said one of the sources.

That could have allowed it to boost output of the AstraZeneca vaccine early, even though regulators had yet to approve it.

India spent months discussing the final price per dose, and inked an initial purchase order roughly two weeks after India’s drug regulator approved the AstraZeneca shot, according to the sources.

At one point, SII ran out of space to store produced doses.

“That is why I chose not to pack more than 50 million doses, because I knew if I packed more than that, I would have to store it in my house,” SII Chief Executive Adar Poonawalla told
Reuters in January.

He said he had spent 20 billion rupees ($346 million) on the 50 million doses that the company started stockpiling since around October.

Even now, the government only makes ad-hoc purchases from SII instead of agreeing a longer-term supply schedule, said one of the sources.

SII has sought more than $US400 million from the government to increase capacity, but no commitment has yet been made.

The health department and foreign ministry did not respond to requests for comment on issues of funding, purchasing delays and other aspects of India’s vaccination rollout.

COVAX also did not green-light shipments to participating countries from SII until after the shot received WHO clearance in mid-February, said a source involved in the COVAX initiative.

The source said those delays meant tens of millions of additional doses that the SII could have produced between October and February never materialised.

Gavi defended its decision to wait for proper approvals before going ahead with firm orders. And while it is looking for more suppliers, it conceded that much still depended on India’s
vaccine makers who account for some 60 per cent of global supplies.

COVAX has a deal to buy 1 billion-plus doses from the SII.

But it has received less than a fifth of the 100 million or so doses of the SII-made AstraZeneca vaccine it had expected by May. SII is also supposed to make millions of doses of the
Novavax shot for COVAX.

Gavi had hoped SII would fully resume vaccine deliveries to COVAX in May, but on Wednesday it said India’s COVID-19 crisis could affect that.

“We understand the ferocity of the virus in India at the current time, nevertheless we hope and expect deliveries to resume as soon as possible,” it said in an email to Reuters.

On Thursday India reported 200,739 infections over the past 24 hours, a seventh daily record in the last eight days, while 1038 deaths took its toll to 173,123. Its tally of 14.1 million infections is second only to the United States.

Having originally aimed to cover 300 million of its highest-risk people by August, or just over a fifth of its 1.35 billion population, the government has now expanded that by another 100 million, with the promise to widen it further.