London: Tens of thousands of people have been evacuated from their homes in India as a severe cyclone barrelled toward landfall on India’s northwest state of Gujarat on Sunday evening.

Heavy rainfall and winds from Cyclone Tauktae, which originated in the Arabian Sea, had already pounded some states along India’s western coast, causing power outages, downing trees and resulting in at least six deaths, according to the Reuters news agency.

Four of the six deaths were in the southern state of Karnataka, where more than 70 coastal villages were affected, according to the state’s disaster management authority. 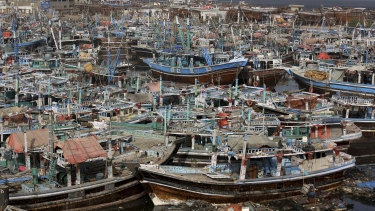 Fishing boats are anchored ahead of the expected cyclone in Karachi, Pakistan.Credit:AP

The cyclone, which was classified as a “very severe cyclonic storm” on Saturday, was likely to intensify over the next day, the India Meteorological Department said in a briefing on Sunday afternoon.

Forecasters said that it would reach the coast of Gujarat, one of India’s largest states, on Sunday, with winds gusting as high as about 185 km/h.

The department said it expected a storm surge of up to three metres in some areas, with the heaviest rainfalls in some areas in Gujarat on Monday.

Gujarat government officials said almost 150,000 people were being evacuated from vulnerable areas on the coast by Sunday evening, Reuters reported.

Officials ordered the suspension of fishing operations in parts of the east central Arabian Sea and along the western coast in some areas of India, with fisherman being advised not to venture out into the sea near the Gujarat coast until Monday.

The cyclone comes as India is grappling with a devastating coronavirus surge driven by a newer variant of the virus that has left hospitals filled to capacity and sick people struggling to get care.

As of Saturday evening, (US time), 266,207 people in India had died from the virus, which experts say is almost certainly an undercount of the full death toll.

Officials have also effectively suspended vaccinations, including in the city of Mumbai, until Tuesday.

As the cyclone neared, dozens of disaster management teams have been deployed in several states, along with army, navy and coast guard units, the government said, adding in a statement Sunday that it was taking steps to ensure “zero loss of life.”

In Gujarat, officials on Sunday said arrangements had been made for patients at coronavirus centres to continue to receive treatment.

Hospitals were sealing windows and doors to windproof them, and more than 170 mobile intensive care unit vans were being deployed to provide emergency care, according to local media. 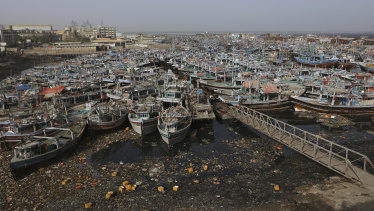 Heavy rainfall Friday from Cyclone Tauktae has already led to the evacuation of 15,000 people from low-lying areas.

They were temporarily relocated to camps in the southern state of Kerala, the Hindustan Times reported.