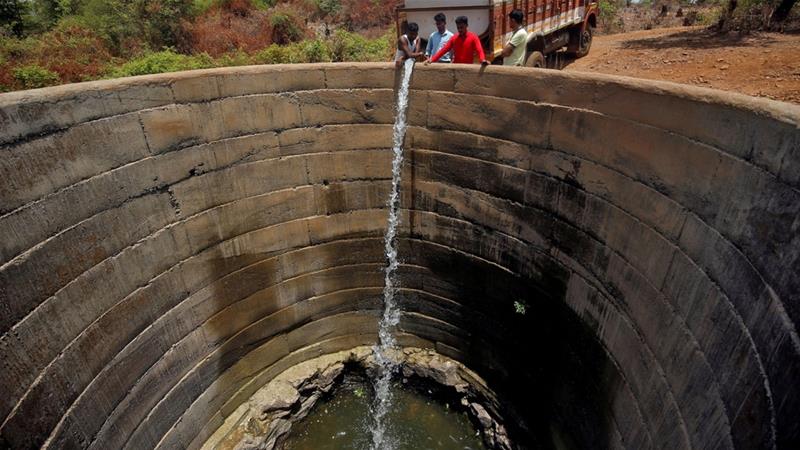 Almost half of India – an area home to more than 500 million people – is facing drought-like conditions while a blistering heatwave has killed dozens of people in the impoverished eastern state of Bihar.

As the country suffers its lowest rainfall ahead of a monsoon season in more than six decades, the western state of Maharashtra witnesses its worst drought in 47 years, forcing many to leave their lands and take shelter in relief camps, as they wait for monsoon rains.

Reporting from Beed in Maharashtra, Al Jazeera’s Elizabeth Puranam said people walk in intense heat, sometimes for kilometres, only to find a small amount of muddy water at the bottom of a well.

Asha Pawar said she collects about five pots – or 100 litres – of water a day for herself and her four children. The state government provides water tankers, but Pawar said they only come every four or five days.

“We have no arrangements for water. We keep getting it from whatever source is available. If nothing is available, we climb down the well for drinking water,” Pawar told Al Jazeera.

“My daughter fell in the well when she went to fetch water. A passer-by rescued her when he heard her scream.”

Elsewhere in Beed, farmers have left their land and moved to nearby relief camps, where the government provides fodder and water to keep their cattle alive.

“There is no water left in the Beed area. It used to rain by June 7, but there are still no signs of rains. Last year, we had a drought situation. This year is worse. If it doesn’t rain again this year, we have to leave our village,” said farmer Navnath Kadam, who has already spent four months at a relief camp.

India’s hot season has been particularly harsh this year, with temperatures rising above 50 degrees Celsius in the western state of Rajasthan.

In Bihar, severe heat during the weekend killed at least 76 people, according to the dpa news agency.

Most deaths occurred in three districts of Bihar – Aurangabad, Gaya and Nawada – where temperatures hovered around 45 degrees Celsius as India entered the third week of searing heat.

On Sunday, Bihar Chief Minister Nitish Kumar announced a compensation of 400,000 rupees ($5,700) for the family of each heatwave victim, while federal Health Minister Harsh Vardhan asked people to not leave their homes until temperatures fell.

In 2017, researchers said South Asia, home to one-fifth of the world’s population, could see heat levels rise to unsurvivable levels by the end of the century if no action is taken on global warming.

Falling groundwater levels and poor irrigation techniques mean farmers are overly reliant on India’s June-to-September southwest monsoon, which provides the country with most of its annual rainfall.

Three of the last five monsoons have been deficient and, while the Indian Meteorological Department is predicting a normal monsoon this year, it is already nearly two weeks late and that worries the farmers.

Experts blame the severe drought on the lack of rain, along with rising demand for water, mismanaged resources and climate change.

Environmentalist Vandana Shiva, who has been warning about India’s water crisis for decades, says bad policy decisions are to blame.

“The water famine we are facing is a result of over 30 to 40 years of ill advice by financial institutions, and that ill advice, on the one hand, mined the ground water, diverted river waters, destroyed the soil moisture, but is also the single biggest reason for climate change,” she told Al Jazeera.

On Saturday, Indian Prime Minister Narendra Modi held a meeting on the water crisis and promised to pipe drinking water to every household by 2024.

But for those who don’t know how they will survive if the monsoon rains don’t come, that’s a very long way off.