Swiss national Gianni Infantino elected by acclamation as the sole candidate at the FIFA Congress in Paris. 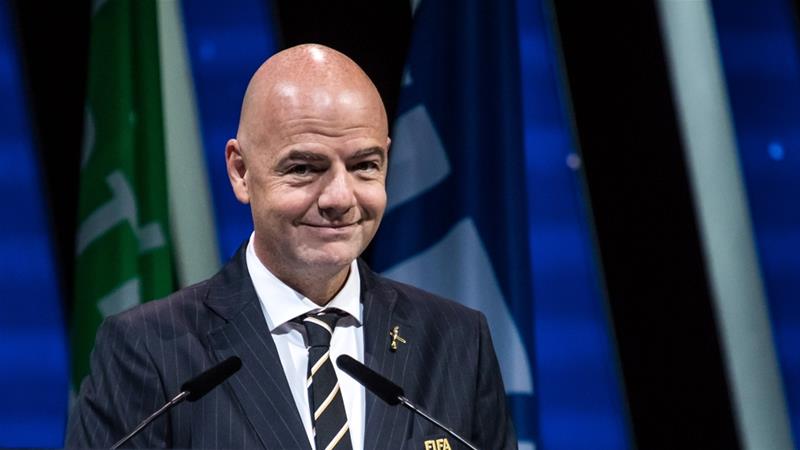 Gianni Infantino was re-elected as president of the football governing body FIFA for a four-year term until 2023.

The 49-year-old Swiss national was elected by acclamation as the sole candidate at the FIFA Congress in Paris.

Infantino has served as president since his election in February 2016 to complete the term of his predecessor, Joseph Blatter, who is serving a six-year football ban.

Infantino told the 211-member association before the vote that FIFA had come a long way since being embroiled in a series of corruption scandals that helped bring down Blatter in 2015.

“The last three years and four months were of course not perfect, I have definitely made mistakes,” he said.

For the first time since 2007, when Blatter was re-elected for his third term, there was no election vote after delegates agreed to change statutes and allow an acclamation.

Reserves, which had fallen below the billion dollar mark for the first time in 2017, rose to a record $2.7bn at the end of December 2018, much higher than the expected growth of $1.6bn.

FIFA’s corruption scandals, which led to Blatter’s downfall and criminal charges against a number of FIFA and other officials, had caused financial problems for the governing body, among other things due to high legal costs.

In addition, a number of sponsors did not renew contracts.

Infantino said that after experiencing its “worst crisis”, FIFA now had “a solid financial situation as never before”.

He promised member associations would continue to benefit after receiving $1.1bn between 2015 and 2018, up from $326m in the previous cycle.

Now, $1.7bn is earmarked for the association in the period to 2022 through FIFA’s Forward Development Programme, and FIFA will be checking closely how the money is spent, Infantino said.