Charli Ronander Berge was tired of studying her UTS fashion design course online in Norway between 2am to 7am to manage the 10-hour time difference.

When told she could return to Sydney on December 6 as part of the first cohort of international students to come back to campus, she was “really happy and started to cry”. 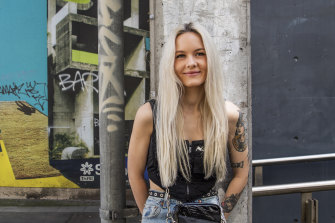 Charli Ronander Berge, a UTS fashion student, is part of the first cohort of international students to return to Sydney. Credit:Louise Kennerley

The 23-year-old is excited at the prospect of completing the third year of her bachelor of fashion design on campus in 2022. She studied on campus at the University of Technology Sydney from 2019 until July 2020 before returning to Norway.

“It was hard … I was studying online between 2am to 7am because of the 10-hour time difference,” she said. “We had to attend classes or else we would fail.

“The fashion design course here is good, and travelling to Australia is a big thing in Norway – it is everyone’s dream.”

University of Sydney international student Li Ying Chan, 22, felt like she’d won the lottery when she secured a seat on one of the first flights back to Australia from Singapore last week. 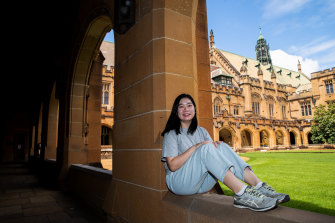 University of Sydney student Li Ying Chan felt like she had won the lottery when she heard she could return to Australia from Singapore.Credit:Edwina Pickles

“It still feels quite unreal, but I am very happy to be back,” she said. “It was a roller-coaster. Me and my friends were on edge about when we would be coming back.

“I felt like I had won the lottery because there were 500 spots in total for the first two flights.”

The report by education policy think tank the Mitchell Institute, at Victoria University, published on Tuesday, shows countries with open borders including Britain, Canada and the United States have seen international student visa application numbers rebound since the pandemic.

The report – Student, interrupted: International education and the pandemic – shows new student visa applications for Australia fell 70 per cent in the year to September 2021. In comparison, the number of new international students in Britain was 37 per cent higher than before the pandemic.

After spending the first year of her degree on campus in 2019, Ms Chan returned to her family in Singapore in March 2020.

“At the time it was the peak of COVID and everything was uncertain,” she said.

She is now looking forward to completing her fourth and final year of a bachelor of education degree in early childhood learning after studying the course online for two years.

“I was quite worried that the borders would not reopen and that I would have to do everything online. I wanted the experience of living in Australia. I was scared I could not come back,” Ms Chan said.

While she found her online tutors supportive and made new friends via Zoom, studying online was difficult. It was also necessary to complete the practical side of her qualification in Australia.

“The good thing about Zoom was I got to meet people online. I’m looking forward to meeting them [face to face] when semester starts,” she said.

“If the border had not opened I would not be able to graduate on time.”

The report found India had overtaken China as the largest source country for new international students. New student visas from China are still 25 per cent below pre-pandemic levels.

Report author Peter Hurley said it was likely that many students who planned to study in Australia went elsewhere, particularly students from India who opted for Britain instead.

“Part of the reason international students pay high fees is to experience a different culture and, for many, to immerse themselves in a country with a different language,” Dr Hurley said. “They can’t do that when they are studying online.

The research shows the Australian education sector and businesses that rely on international students are on track to lose $20 billion a year until borders reopen.

“For every six-monthly missed intake of international students, we estimate Australia is losing about $4 billion to the economy,” Dr Hurley said. “Those losses are not one-off but accumulate for the duration that the missed students would have been studying their course in Australia – usually three to four years.“ 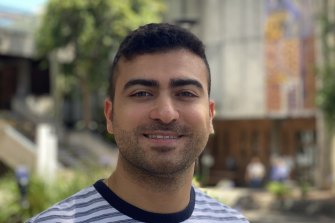 “I’m so excited to be back”: James Abou-Ghaida, 27, of Edmonton in Alberta, Canada, will return to Newcastle University to study law.Credit:

James Abou-Ghaida, 27, of Edmonton in Alberta, Canada, is looking forward to returning to Newcastle University after leaving just two months into his law degree last year. He has completed almost two years of his study online and will enter the third and final year of his Juris Doctor, which is costing him about $40,000 a year – $120,000 in total.