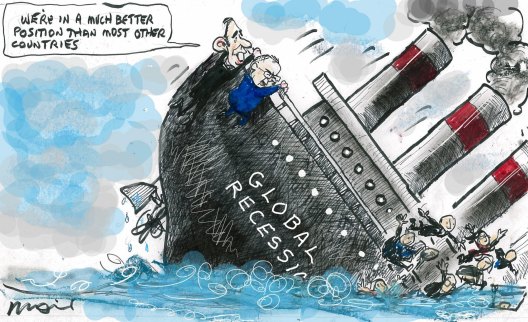 To submit a letter to The Age, email [email protected] Please include your home address and telephone number.

It is in people’s interests to back a progressive regime
You report that “Voters back spending cuts over tax increases” (The Age, 11/10), but in the final analysis it’s a matter of arguments and how well they are made. Australians enjoy much cheaper pharmaceuticals compared with the US because of the Pharmaceutical Benefits Scheme, an example of “collective consumption”, in which citizens get a better deal as taxpayers than they would as private consumers.

Once essentials are provided for more efficiently, there is actually more scope for discretionary expenditure, which improves quality of life. The same might be said, perhaps, for Medicare Dental if implemented; or for public infrastructure instead of private toll roads. A flatter tax system also means that those on lower and middle incomes pay a greater proportion and get less back in return.

Labor needs the resolve and clarity to argue how most taxpayers – workers, citizens – get a better deal in a mixed economy with a stronger social wage and progressive tax system, but it needs to pitch this in a way most people will understand. If it does, it is likely people will vote in their own best interests.
Tristan Ewins, Hill North

Don’t people understand that all of these things are paid for by taxes and that low taxes and high quality government services are mutually exclusive? It’s all too discombobulating for me.
Helen Moss, Croydon

The cost of basic items is the same for everyone
Your correspondent writes “We have a progressive tax system, so, quite appropriately, the wealthy pay a higher percentage of their income in tax than do lower earners. The flipside of this is that a tax cut will be worth more, in dollar terms, to high-income earners” (“If you earn more …”, Letters, 14/10) in support of his contention that “repeated references to how much a tax cut is worth to someone on, say, $200,000 vs $62,000 display a lack of understanding, or perhaps a wilful misrepresentation, of our tax system”.

What the writer misunderstands, or perhaps wilfully misrepresents, is that the cost of basic items, food, power, fuel, etc. are the same, whether one earns “say, $200,000 or $62,000”, so that the reduction of the tax rates to 30 per cent for all those earners has vastly different impacts.
Ian Usman Lewis, Kentucky, NSW

They’re waiting in the wings
Your correspondent (“Stage three support”, Letters, 13/10) asks where the commentators supporting the tax cuts are.

Obviously they are saving their ink until Anthony Albanese announces a change to the tax cuts and then they will tell us every day until the next election that Labor has broken a sacred promise.
Miranda Jones, Drummond

A bet each way
According to state shadow attorney-general Michael O’Brien, “Nothing substantive should be done [about selecting the new anti-corruption commissioner] without absolute bipartisanship. Preferably, this should be a decision entirely for the government Victorians choose on November 26” (“Libs push for say in hiring of corruption agency chief”, The Age, 13/10).

Michael, it’s either a bipartisan decision, or one for the elected government. It cannot be both. And this is the opposition’s pick for Victoria’s attorney-general.
Dennis Dodd, Wangaratta

Does ALP know it won?
Here’s hoping that one morning the ALP will wake up and realise it won the last federal election.

On that happy day it will withdraw the case against ATO whistleblower Richard Boyle (“On trial for telling truth about abuse of power”, Comment, 14/10), abandon stage three tax cuts, raise the dole to a liveable sum – like $700 a week, give all refugees who were in offshore detention permanent residency visas and fully fund the arts and the university sector.

Until then we will have a government that is a dog being wagged by the tail of Tony Abbott, Scott Morrison and Peter Dutton.
Di Cousens, Upwey

Get moving on the Voice
Truth-telling and treaty making are addressed in the Uluru Statement from the Heart but priority is given there to a Voice to Parliament.

Providing the wording for constitutional change follows that suggested by the prime minister, this can be put to a referendum quite soon. It allows the concept to be endorsed, while allowing flexibility for the actual structure to be developed and adjusted based on experience.

If other jurisdictions are a guide, truth-telling and treaty making could take many years, up to a decade.
We should get on with enshrining the Voice as soon as possible to start the ball rolling.
Peter Barry, Marysville

Perspective, please
Your correspondent (“In no position to criticise”, Letters, 14/10) notes the bombing of Hamburg, Dresden, Hiroshima and Nagasaki by the Allies in WWII and later bombing operations, but he conveniently leaves out Hitler’s earlier pounding of Birmingham, Coventry, London and other UK cities in WWII.

While agreeing with his endorsing Mick Ryan’s statement about this repulsive culture, a little perspective would seem appropriate.
Bill Pimm, Mentone

It’s time to move on
Again we read of Cricket Australia’s lifetime leadership ban of David Warner as a result of the “Sandpapergate” incident, but now there are suggestions, seemingly urgent, that his ban could be reversed.

Why does Cricket Australia need to rewrite its rules so that an individual could become the captain? In the specific case of David Warner, he is 35 years old so his career is reaching its finish.

I am sure that Cricket Australia has a leadership program, or it should have, and with 18 other contracted mens players there must be some young players who could be groomed for the captain’s position.

It’s time for Warner, and his supporters, to move on rather than hoping for a rules rewrite.
Dennis Fitzgerald, Box Hill

Save Preston Market
The proposed redevelopment of Preston Market should be an important election issue. We need Daniel Andrews and the Labor Party to represent the community and make a decision in our interest and not for the developers.

No one wants these proposed high-density apartment towers. Put the site back into public hands and invest in the market. The future generations will thank you.
Esther Doecke, Preston

A dispiriting read
It is most dispiriting to read that a significant percentage of people preferred spending cuts to tax increases, including abolition of the stage three tax cuts. We are a low-taxed country by OECD standards and the state of so many of our public institutions demonstrates this: health, education, aged care, childcare, just to name a few.

Such surveys also show why both main political parties – whose goal is retention of power as much as serving the country – are so timid about increasing taxes. The Coalition always supports lower taxes – especially for its corporate donors – and the Labor Party is still recovering from its loss in the 2019 federal election, where it had proposed some admirable changes to the tax system.

The long-term effect of increased government spending if properly targeted will be much more positive than the short-term gain of a few tax cuts.

This is what the present government should be communicating in terms accessible to the general public.
Greg Bailey, St Andrews

Siding with the minnows
Your correspondent (Letters, 14/10) rightly asks why duck shooting is still allowed near vital feeding grounds of threatened migratory shorebirds. But why is it allowed in Victoria at all?

Almost two-thirds (64 per cent) of Australians live in jurisdictions where recreational duck shooting is banned because it’s cruel: WA, NSW, Queensland and ACT. A further 10 per cent live under governments (SA, NT and Tas.) that allow it. Why does Victoria side with the minnows?

This weekend the curtain falls on public consultation for new animal welfare legislation in Victoria. The Prevention of Cruelty to Animals Act 1986 will be revamped and renamed but the government plan for proposed changes says “legal and legitimate activities” like hunting can continue. We have until Sunday to call out this cruel circular argument.
Corale Suter, Somers

This peace is imperative
Your story “Biodiversity crisis: plea for Paris-style pact” (The Age, 14/10) is a most powerful indictment of what we have lost in the biodiversity of our wildlife.

In much of the world we have failed to understand and protect our ecosystems. It is the commercialisation of many of our life support systems that has led to the impoverishment in many places of biodiversity.
It is imperative that we make peace with Mother Earth: already it is too late in some places for recovery.
Judith Morrison, Nunawading

Another way of learning
Thank you for publishing the obituary of Sue Wills (“Gay rights trailblazer leaves lasting legacy”, online, The Age, 11/10).

Like many others, her obituary provides a fascinating insight to a person who had a major impact on Australia, yet for many of us, someone who remained unknown.

It would be constructive if schools were to introduce obituaries to students, so that they might navigate another

A study in contrasts
So China’s ambassador to Australia, Xiao Qian, describes the AUKUS alliance as an “Anglo-Saxon” ethnic bloc (“China labels AUKUS pact an ‘ethnic club’”, The Age, 14/10).

Even a cursory look at their respective cabinets shows they have an ethnically diverse leadership (by global and historical standards, at least), reflecting their multicultural societies. This is in stark contrast with the near-total domination by the Han ethnic group of the Chinese Community Party leadership.

Along with the rule of law, democracy and open markets, this embrace of diversity and plurality is what unites these three nations, not any particular ethnicity.
Gregory Hill, Brunswick

Not so casual query
As I head off to the supermarket, a disturbing thought has entered my mind. If you were a casual worker at the supermarket with COVID, but you had to turn up to work to earn money for rent, how many people would the virus spread to in a day?

What would be the knock-on effect to the economy?
Betty Alexander, Caulfield

Coronavirus
South Australia is keeping mandatory reporting of positive COVID tests so it will be able to tell us when the next wave is coming because Victoria won’t know.
Barbara Lynch, South Yarra 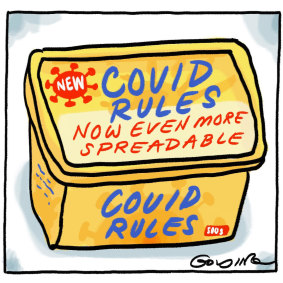 Now most restrictions on mask wearing and isolation have been removed, I will be wearing my mask more than ever.
Michael Meszaros, Alphington

Trade with China
The Chinese government wasn’t in any hurry to repair trade relations with us until now. Is it running short of lobsters and wine?
Les Aisen, Elsternwick

Any suggestions?
What confected landscape would your correspondent (“Furthermore”, Letters, 13/10) like the proposed Airport Link to travel through?
Rob Hocart, Tyabb

David Warner
Is David Warner the only candidate to replace Aaron Finch as captain of the one-day team?
Peng Ee, Castle Cove, NSW

Your correspondents are spot on about the war in Ukraine (Letters, 14/10). Let’s concentrate on the current support, diplomacy and peace measures. Military involvement has rarely ended well.
Anne Sgro, Coburg North

Finally
Interesting read on the Australian Federal Police hack; the most interesting thing being that they weren’t aware of it until contacted by The Age (“Secret police operations exposed in hack attack”, 14/10). These are people handling security? I certainly feel “safe”.
David Jeffery, East Geelong

Michael Bachelard sends an exclusive newsletter to subscribers each week. Sign up to receive his Note from the Editor.