Home » ‘It’s your duty’: Plea for older Victorians to be vaccinated as Perth outbreak grows

The state government is pleading with older Victorians to roll up their sleeves for an AstraZeneca vaccination, with a top official declaring it was the “duty” of those aged 70 and over to help avoid COVID-19 outbreaks and restrictions.

The state’s COVID-19 logistics chief, Jeroen Weimar, said the state was delivering only a fraction of the vaccines it was capable of, despite six state-run mass vaccination hubs open to the public as of this week and a new community infection in Perth on Saturday. 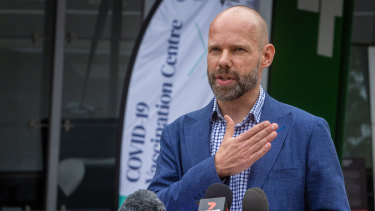 COVID-19 logistics chief Jeroen Weimar has issued a plea for older Victorians to get vaccinated.Credit:Scott McNaughton

Fewer than 150 people had received a vaccination at the Melbourne Convention and Exhibition Centre by lunchtime on Saturday. The site is set up to vaccinate 5000 people each day.

Experts believe fears about the extremely low risk of a clotting condition is deterring some people aged over 70 from getting the AstraZeneca vaccine.

To date, there has been just one local case of the clotting condition (thrombosis with thrombocytopenia) linked to the AstraZeneca vaccine in someone aged over 50 – a Victorian man aged 80, who is in a stable condition and recovering. There have been six cases overall, including one death of a NSW woman, from about 1.1 million doses of the AstraZeneca vaccine dispensed in Australia to date.

“I appreciate that we’re incredibly fortunate here in Victoria and in Australia that we’re not living with what feels like the daily threat of COVID,” Mr Weimar said.

“But what the case from Perth highlights to us is that it’s never that far away. And if we’re going to move beyond this pandemic, we really need to … get vaccinated as soon as we can.

“Really, for any Victorian aged over 70 I’m afraid it is your duty now to come forward and get vaccinated, either with your GP or using one of these large-scale centres.”

Perth was sent into a three-day lockdown on Friday after a Victorian man who had stayed in hotel quarantine in the city tested positive for COVID-19 after returning home to Melbourne. It’s suspected he caught the virus from another quarantining guest. 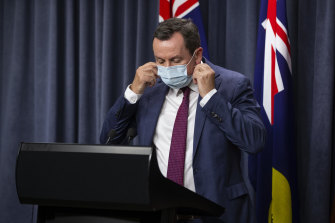 On Saturday, Western Australia recorded a second community case of the virus linked to one of the exposure sites identified by state health authorities.

The person went to get tested for COVID-19 after realising they had been in one of the locations visited by the Victorian man and his Perth friend while they were both infectious.

The three family members of the Victorian man, who has been moved to hotel quarantine at his own request, tested negative.

Forty-nine passengers from the positive case’s plane into Melbourne had tested negative by Saturday afternoon. The state government also sent texts to almost 5500 people who have entered Victoria from Perth since April 17 instructing them to get tested and self-isolate for 14 days.

This month, the Australian Technical Advisory Group on Immunisation issued advice preferencing the Pfizer vaccine for those aged 49 and under.

But experts say it is right to continue to vaccinate people aged over 50, with the ever-present threat of new coronavirus outbreaks and large supplies of the alternative Pfizer vaccine not expected to arrive until late in the year.

The Therapeutic Goods Administration also says there is emerging evidence suggesting the risk of thrombosis (blood clots) with thrombocytopenia (very low platelets) following the AstraZeneca jab is lower in this older age group – an assertion backed by experts.

The risk posed by COVID-19 also increased as people aged, said Professor Paul Monagle, a paediatric haematologist at the University of Melbourne.

“As we have seen this week, we are only ever a little bit away from having COVID in our community,” said Professor Monagle.

Infectious diseases expert Ben Cowie, who is leading Victoria’s vaccine rollout, told The Sunday Age authorities were balancing the risk of a “very serious” but “incredibly rare” vaccine side effect, with the threat that people could fall sick and die in a third wave of the virus in Victoria.

“People have questions and they’ve got concerns and that’s totally OK,” he said.

Professor Cowie said each of the state’s six vaccine hubs had space to safely administer at least 2000 shots a day, but extensive work, including bolstering staff numbers, would be required for the hubs to hit tens of thousands doses a week.

“It comes down to vaccine supply and the workforce that we need to mobilise to actually make that happen, Professor Cowie said. “But, with the real estate we have … we’ve got the space and the design is able to scale up significantly more than where we are.”

Dr Jose Perdomo, a senior research officer in the Haematology Research Unit at the St George and Sutherland Clinical School at UNSW, said even though older people had also developed thrombosis with thrombocytopenia, they were also getting this vaccine in much higher numbers.

“In most places initially, that is how vaccination has started, with the vulnerable and older populations,” Dr Perdomo said. “The only younger people were those working in risky professions or the health system.”

About 800,000 Victorians are over 70 and a total of 2.2 million people, or one-third of Victoria, will be eligible on May 3 when walk-in vaccinations open to those over 50.

“If you’re over the age of 50, I’d really like you to be planning on how you’re going to do your vaccination now,” Mr Weimar said.

Mr Weimar said he was confident Victoria was on top of any impacts of the Perth outbreak and would not need restrictions beyond the decision to block travel from the “red zone” of Perth from Friday night.

A Health Department message to students and parents at Caulfield South primary school late on Friday to self-isolate was reversed by Saturday afternoon after two students who were on the same flight as the positive case tested negative.

Meanwhile, AFL confirmed the Anzac Day blockbuster between Collingwood and Essendon will proceed as planned at the MCG despite all Collingwood players getting tested on Saturday because they played in Perth last Friday.

West Coast’s visit to Geelong also went ahead after every Eagles player tested negative before the Saturday afternoon game. Any West Coast fans who had travelled from Perth were told not to visit the stadium.