Tokyo A man has been sentenced to death by a Japanese court on Tuesday for killing and dismembering nine people, most of whom had posted suicidal thoughts on social media, in a case that shocked the country.

The Tachikawa branch of the Tokyo District Court found Takahiro Shiraishi, known as the “Twitter killer”, guilty of killing, dismembering and storing the bodies of the victims in his apartment in Zama, near Tokyo. 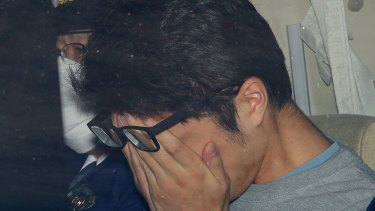 Takahiro Shiraishi leaves a police station in Tokyo in November, 2017. He has been sentenced to death for serial murder.Credit:AP

Shiraishi, 30, said he would not appeal his death sentence.

Police arrested Shiraishi in 2017 after finding the bodies of eight females, including girls aged 15 and 17, and one male in cold-storage cases in his apartment.

Shiraishi called himself "@hangingpro" on one of his five Twitter accounts and offered to help people in pain. He tweeted statements such as "It is not hard to hang oneself" and "If you cannot help yourself, I can help you," public prosecutors revealed during the trials.

But once he had lured the women to his apartment, he strangled them, sexually assaulted and robbed some of them, and cut up their corpses.

The news prompted Twitter to introduce rules against promoting or encouraging suicide and social harm on its service, and led Japan's government to expand telephone and online support for people contemplating suicide.

Shiraishi told police he had tweeted about suicide and exchanged messages with several women, coaxing them to his apartment, Japanese media reported.

Although his defence lawyers argued that he assisted the victims' suicidal wishes, Shiraishi later said he killed them without their consent.

In the ruling, presiding Judge Naokuni Yano said none of the victims agreed to be killed and that Shiraishi was fully responsible for their deaths, according to media reports.

He said the crime was extremely heinous and had caused fear and concern in a society where social media had become an indispensable part of everyday life, NHK public television reported.

Japan usually reserves the death penalty for those convicted of multiple murders. Executions are carried out by hanging.

It's suicide rate ranks among the world’s highest. Following a recent decline, the number has climbed back this year as people were hit by the effects of the pandemic.

In an interview with NHK in 2017, Twitter CEO Jack Dorsey called the case "extremely sad," and said the social media company needed to make sure its site "is being used in positive and healthy ways."

Catch all the day’s headlines

At the end of each day, we’ll send you the most important breaking news headlines, evening entertainment ideas and a long read to enjoy.  Sign up to The Sydney Morning Herald’s newsletter here, The Age’s here, Brisbane Times’ here, and WAtoday’s here.

Mets in talks with Jackie Bradley Jr. after losing out on George Springer