US President Joe Biden says he will nominate the first black woman to the US Supreme Court by the end of February, describing the move as “long overdue” as he set a swift deadline to fulfil his election promise.

A day after news leaked that liberal justice Stephen Breyer was planning to retire after almost three decades on the bench, the President and the veteran judge appeared together at the White House on Friday (AEST) to make the announcement official. 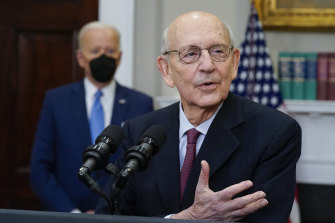 Supreme Court Associate Justice Stephen Breyer announces his retirement in the Roosevelt Room of the White House in Washington.Credit:AP

Speaking during a small ceremony in the Roosevelt Room, Biden said he had been “studying the backgrounds and writings” of various candidates but had not yet made any decisions on who his nominee should be – “except one”.

“The person I will nominate is someone with extraordinary qualifications, character, experience and integrity. That person will be the first black woman ever nominated to the United States Supreme Court. It’s long overdue in my view,” he said.

Biden said that Vice President Kamala Harris, who also made history by being the first black woman to serve in her role at the White House, would help to advise him on a potential replacement for Breyer.

Breyer formally announced his retirement in a letter to Biden made public today, saying he plans to leave the bench at the conclusion of the Supreme Court’s current term, which is typically at the end of June or early July – “assuming that by then my successor has been nominated and confirmed”.

This means he is still likely to take part in one the biggest rulings the Supreme Court will make in years: the Mississippi abortion case that could end up winding back sections of Roe vs Wade, which grants constitutional protection for women who choose to have an abortion.

Standing alongside Biden, with his wife and the First Lady watching on, the 83-year-old liberal judge reflected on the court’s diversity of opinions and the American “experiment”.

“It’s every race, it’s every religion and it’s every point of view possible,” he said. “It’s a kind of miracle. People that are so different in what they think, and yet they’ve decided to help solve their major differences under law.”

Breyer’s departure will not alter the balance of power on the bench, where conservatives make up six out of the nine sitting judges. Nonetheless, it will give Biden his first chance to shape the nation’s top court and galvanise his Democratic base.

It also paves the way for what is expected to be a potentially contentious process ahead of this year’s midterm elections.

While it is not yet clear how much Republicans will attempt to thwart Biden’s pick, Senate Minority leader Mitch McConnell issued a statement urging the president to “govern from the middle” when choosing Breyer’s replacement and “not to outsource this decision to the radical left”.

Republican Chuck Grassley, a ranking member of the Senate Judiciary Committee that vets court nominations, also set similar boundaries, saying the nomination should be “an individual within the legal mainstream” who can receive the same kind of “broad, bipartisan support” that Beyer did when he was confirmed by the Senate to the Supreme Court in 1994.

There are also two rebel Democrats in the Senate, Joe Manchin and Kyrsten Sinema, who have previously blocked key parts of Biden’s policy agenda – however they have traditionally voted along party lines for court nominations. 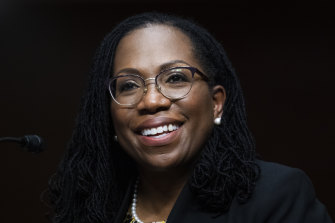 Democrats are keen to have a speedy confirmation that is on par with the one-month process that Republicans used in 2020 to confirm Donald Trump’s third Supreme Court nominee appointee, Amy Coney Barrett, ahead of the election that year.

The frontrunner is 51-year-old DC Circuit Judge Ketanji Brown Jackson, who Biden elevated last year from the Federal District Court to the US Court of Appeals.

Other accomplished women also in the mix including former Obama administration official Leondra Kruger, who is now an Associate Justice of the Supreme Court of California; civil rights attorney Sherrilyn Ifill, who served as president and director-counsel of the NAACP Legal Defence and Educational Fund; and J Michelle Childs, who has been a district judge in South Carolina for the past decade.

David Johns, executive director of the National Black Justice Coalition, a black LGBTQ and civil rights group, said the Supreme Court was “a branch of government that should include the diversity of life experiences of the American people on its bench.”