A single, super-spreader is all it could take to propel Victoria into third wave of coronavirus infections.

As mounting evidence points to the majority of COVID-19 cases being spread by 20 per cent of those infected, epidemiologists say stopping a "super-spreader scenario" – where one person infects many people – is the only way to stop another peak in cases. 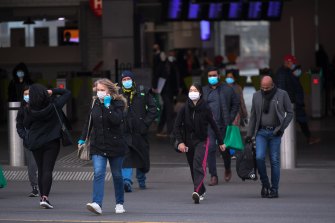 Just one super-spreader could spark a third wave.Credit:Eddie Jim

Despite the catastrophic danger posed by the super-spreading effect, Craig Dalton, clinical epidemiologist at the University of Newcastle, said it was a feature sometimes overlooked in the global pandemic.

“But then there’s this small percentage of people who appear to infect a lot of people,” Dr Dalton said.

"If the infected person is a super-spreader then quick contact tracing is especially important."

Keeping nightclubs closed until there is an effective vaccine, targeting messaging about the dangers of the virus to young people – who are more likely to be super-spreaders – and preventing outbreaks in high-risk settings, such as gyms, was critical, he said.

What is a super-spreader?

Some experts speculate that the immune system is what makes a super-spreader. It may not be as effective at suppressing the virus and means they unknowingly transmit infections to far more people than the majority do. Others theorise some people are simply virus "super-shedders".

But it is also likely to be fuelled by biological and environmental factors, including getting a higher dose of the virus to begin with, and those who are infected coming into contact with more people.

Super-spreading is not exclusive to SARS-CoV-2. It has been documented as far back as the early 1900s. Cook, Mary Mallon, spread typhoid fever to more than 50 people in the early years of the 20th century.

A big, burly man, with a large set of lungs who is exercising, for example, has the makings of a super-spreader.

It is impossible to always determine who might be super-spreader but there are factors at play that greatly increase the threat.

A big, burly man with a large set of lungs who is exercising, for example, has the makings of a super-spreader.

"The bigger the lungs, the more chance they’ve got to expel more virus out," Dr Dalton said.

Under normal circumstances, large droplets fall to the ground within a metre from the mouth or nose, but throw moderate to vigorous exercise into the mix, and a forceful expulsion of air can transmit droplets much further.

"If they are breathing out quickly to rapidly and exercising heavily indoors they can fill a room with virus so more people can be exposed to an infectious dose because there’s a big viral load in the air," he said.

"They may also expel more droplets, which will travel much further, so more people come within the range of where they can get infected."

The pathogen flew in with returned travellers who quarantined in the Rydges on Swanston and the Stamford Plaza hotels, before it spread to more than 30 security guards setting in a motion a wave that killed hundreds of people in Victoria.

"It was a super storm of super-spreading events," Professor McLaws said. "Victoria is still in a critical phase and it risks a third wave if it lifts restrictions too quickly."

Dr Dalton, who has studied the phenomena of super-spreading, said countries such as Hong Kong and South Korea were praised for their handling of the COVID-19 pandemic but once restrictions were eased small clusters of COVID-19 cases quickly exploded to thousands during super-spreading events inside bars, nightclubs, churches and gyms.

One super-spreader, dubbed Patient 31, attended church twice in South Korea before testing positive to coronavirus earlier this year. Within weeks, South Korea went from dealing with a small number of COVID-19 cases to thousands. More than 5000 cases would be traced back to the mysterious Shincheonji religious group.

Meanwhile, almost 36,000 people have died after contracting COVID-19 in Italy. Yet, the death toll from the virus can be traced back to clusters in just three regions of the entire country. Lombardy alone accounted for 17,000 deaths. 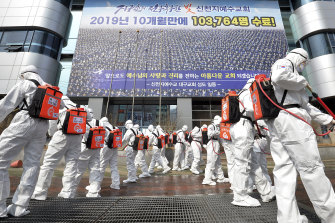 Soldiers in protective suits spray disinfectant on the steps of the Shincheonji Church of Jesus in South Korea.Credit:Newsis

Musicians who performed at four Hong Kong bars were also linked to a recent spate of more than 100 infections.

“But all the evidence points to indoors being such a bigger risk and there are lots of things we can do to make the risk much lower.”

He said opening bars and having a quarter of the usual number of people indoors was better than not opening at all.

“There are things that are really hard for people in the industry,” he said. “But the things we have in place to prevent spread will constantly be adjusted depending on how much community transmission we have."

"Nightclubs probably shouldn't be opened until we get a vaccine or reach elimination, unless the industry creates much more aggressive COVID-safe polices," he said.

A single hospitality worker who worked venues across Melbourne was linked to dozens of cases in one of the state's first major clusters, while delirious patients shouting and roaming in hospital wards have been linked to super-spreading coronavirus in Victorian hospitals.

There have also been reports of a swingers party in Colac coming under police investigation after the country town was hit by a large coronavirus outbreak linked to a local abattoir.

Much of the discussion around reopening gyms has been focused on social distancing and enhanced hygiene of high-touch zones such as treadmills and bikes but Dr Dalton said reducing the risk of respiratory transmission was of equal importance.

With small outbreaks documented in gyms across the world, Dr Dalton says there needs to be larger buffers around people doing aerobic exercise and a limit to their numbers. Increasing air flow and ventilation in gyms was also crucial, he said.

Professor McLaws, argued however, gyms were super-spreading hotbeds and it was still too perilous to even consider opening them.

"Exercise should be done outdoors," she said.

Dr Dalton said targeted testing and screening of those aged between 20 and 40 was important to breaking the hidden chains of transmission. This cohort fanned the spread of Australia's second surge of infections and were more likely to be mildly ill or asymptomatic.

Professor McLaws wants young adults, along with frontline healthcare workers, to be fast-tracked for vaccines.

"Slowing the spread is the best way to protect the elderly and immunocompromised." she said.

“It just takes one [super spreader] and it can be off and away," Professor Cheng said.

The Andrews government has repeatedly come under fire for its beleaguered contact-tracing model blamed for allowing the second wave of infections to spiral out of control and it appears to have learned from past mistakes.

"The incident management team effectively put a ring around the Casey outbreak and stopped it in its tracks," a Victorian Department of Health spokesman said.

Three of the government's five new suburban contact tracing hubs have already been set up as Melbourne prepares to take the next step in the road map out of lockdown.

Doctors, nurses, medical students, paramedics and Australian Defence Force personnel have been added to boost the efforts of contact tracing staff with the public health team now hovering at more than 2600 people.

But will it be enough?

"It is possible to dramatically reduce the risk," Dr Dalton said. "By focusing our attention on controlling the risk of super-spreading events it will mean we are able to open up more of the economy."