LOCKDOWN fury has erupted in Europe – with Italian restaurant owners clashing with cops over the country’s shutdown and vaccine chaos.

Last night's demonstration in Rome is the latest in a series of anti-lockdown protests across Italy while a third wave of the coronavirus pandemic takes hold in Europe. 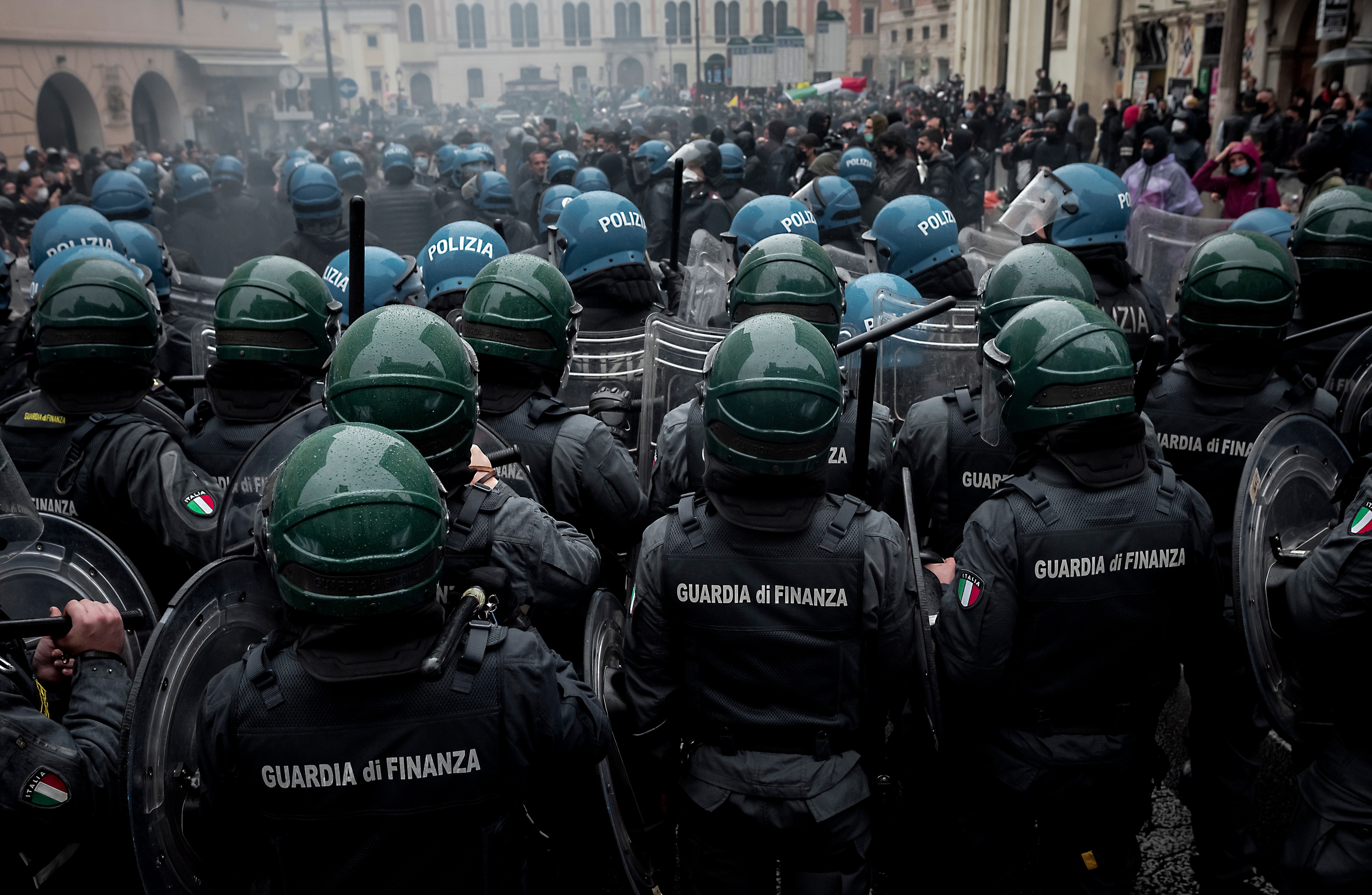 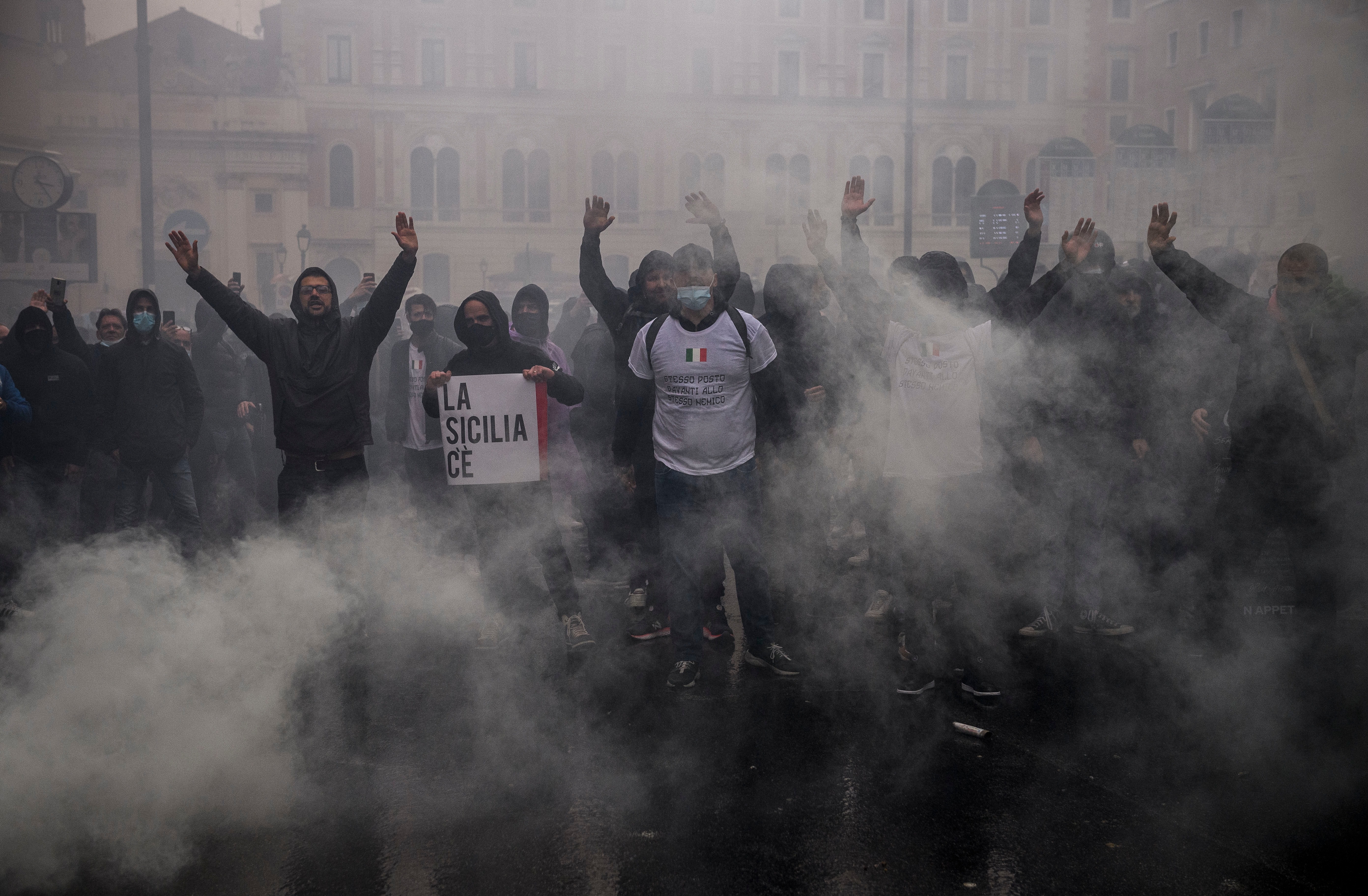 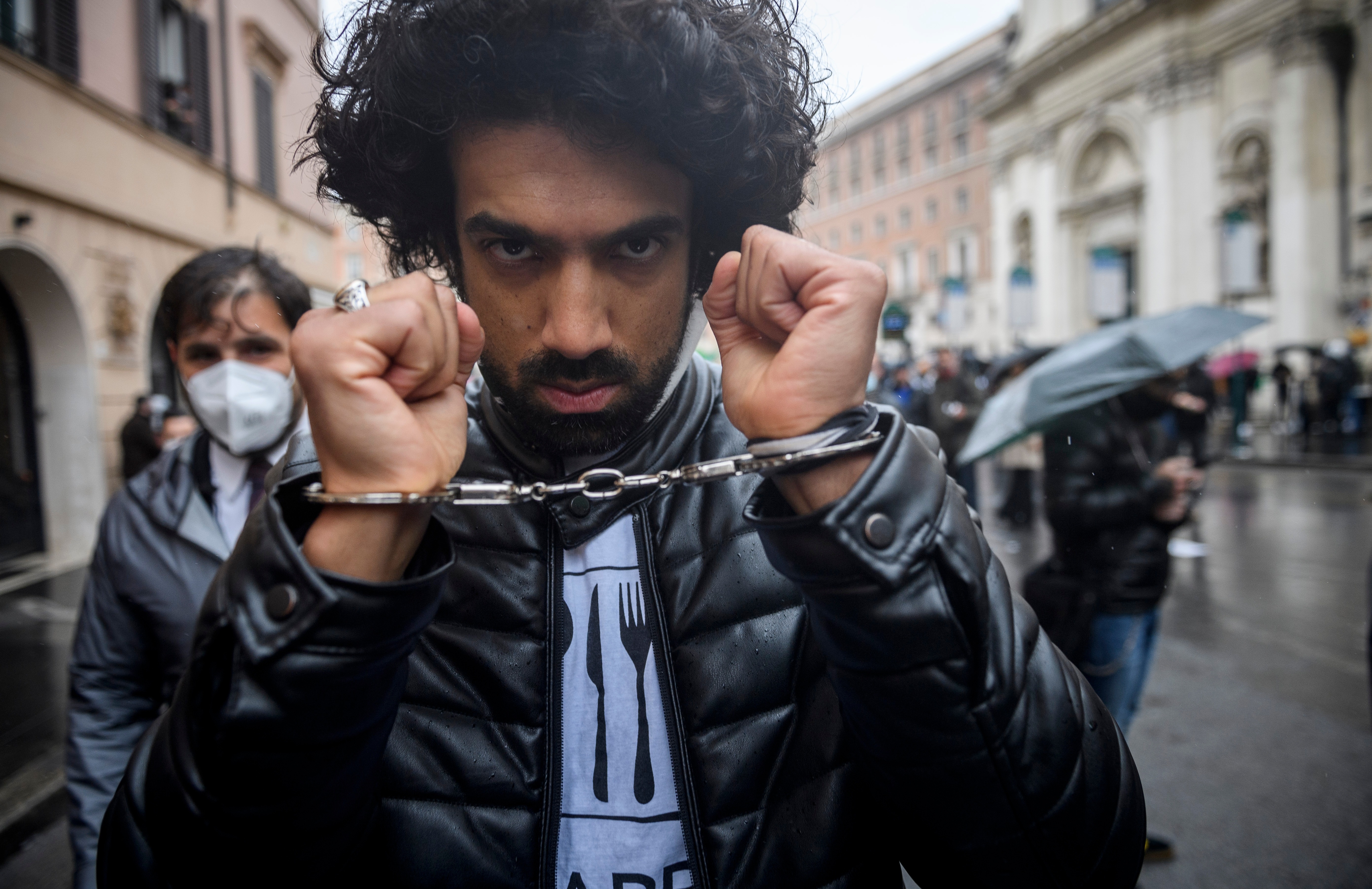 The lockdown weary Italians are begging authorities to open the country, which has seen its GDP fall by a staggering 8.9 per cent during the pandemic.

Protestors were blocked off from areas usually used for demonstrations and clashed with riot police chanting “we are all workers” in one of the city’s central plazas.

Meanwhile some protestors, believed to be associated with the far right, threw stones, smoke bombs, fireworks and bottles at police.

It comes as shopkeepers held a protest in Naples on Saturday, while a similar protest was held by restaurateurs in Rome last week.

Italy spent their Easter holidays in lockdown – and restaurants, bars and nonessential retail are thought to remain close until next month.

Italy's vaccine rollout has been sluggish with 12 million doses administered including 4.2m going to those aged 80 and above and only 1.26m jabs given to people in their 70s. 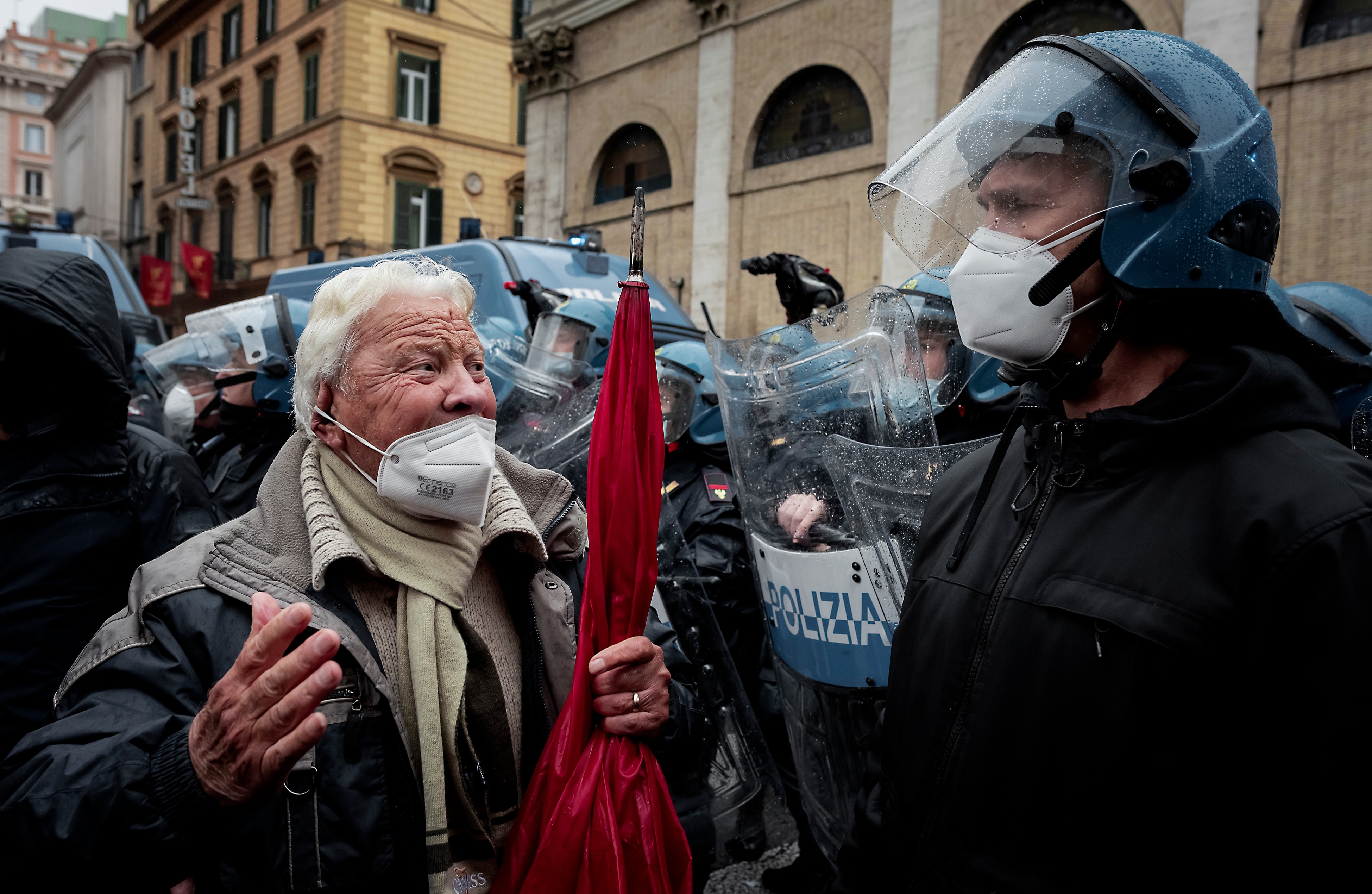 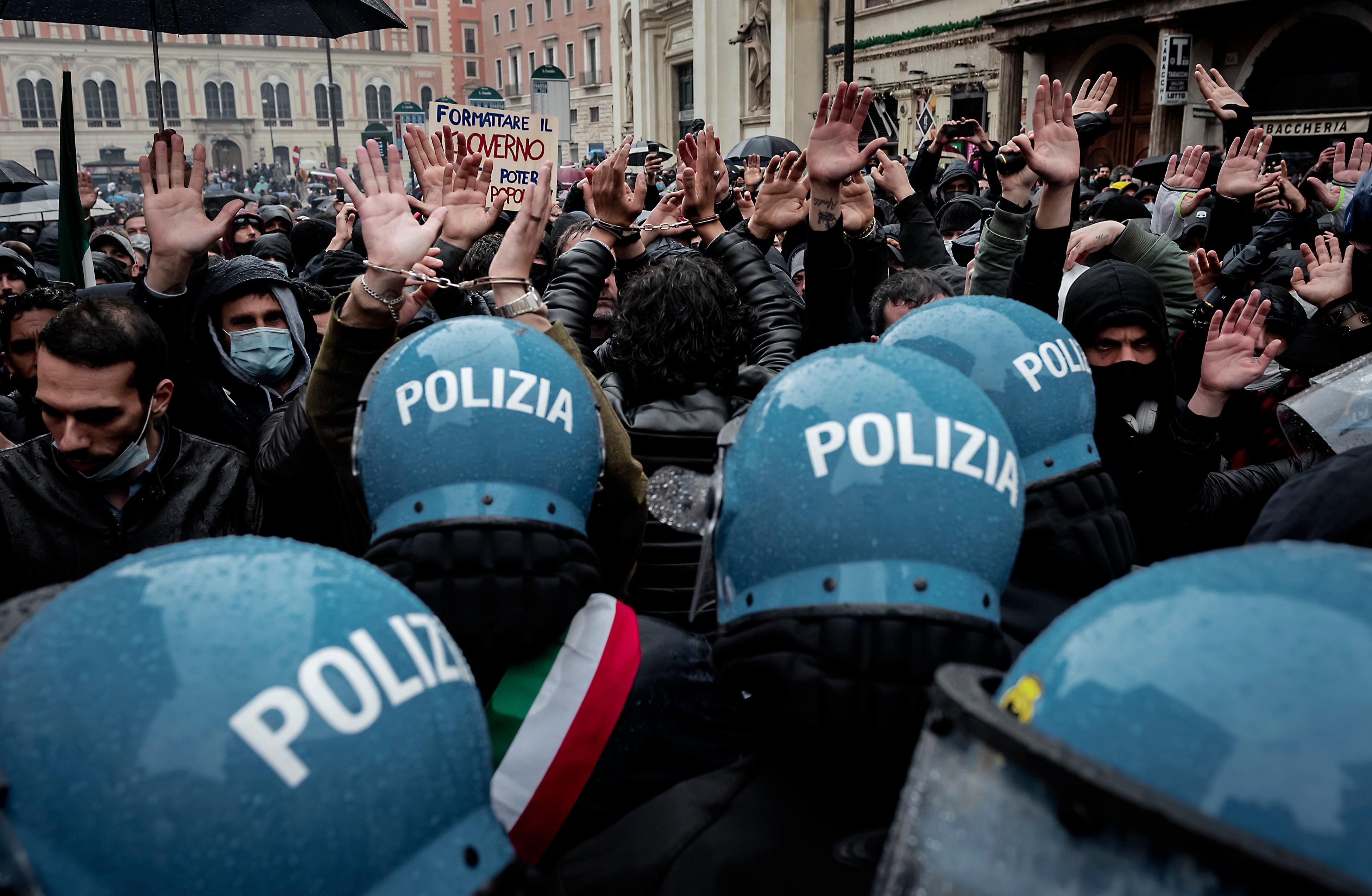 Health workers have received 3.1m doses while a total of 2.4m have gone to an opaque category named as "others."

Italian Prime Minister Mario Draghi has now mandated that all healthcare workers must receive the jab – in the hope of crushing anti-vax sentiment.

Unlike other countries, Italy did not focus on first vaccinating its elderly citizens when it launched its jabs campaign at the end of December.

It comes as AstraZeneca plants have been at the centre of a “vaccine war” between London and Brussels, with the UK insisting it has first claim on vaccine production under the terms of contracts signed last year.

And according to Corriere Della Sera, doctors in Italy are now attempting to book vaccine appointments in Serbia, a country that has 26 per cent of the population vaccinated.

The eastern European nation, which is located outside of the EU, has seen a surge in its inoculations due to deals with China and Russia for their jabs Sinopharm and Sputnik V.

Although not approved by the European Medicines Agency, Italian doctors are continuing to book jab appointments.

Italians are now booking through the Serbian consulate in Milan and the embassy in Rome, Corriere Della Sera reports. 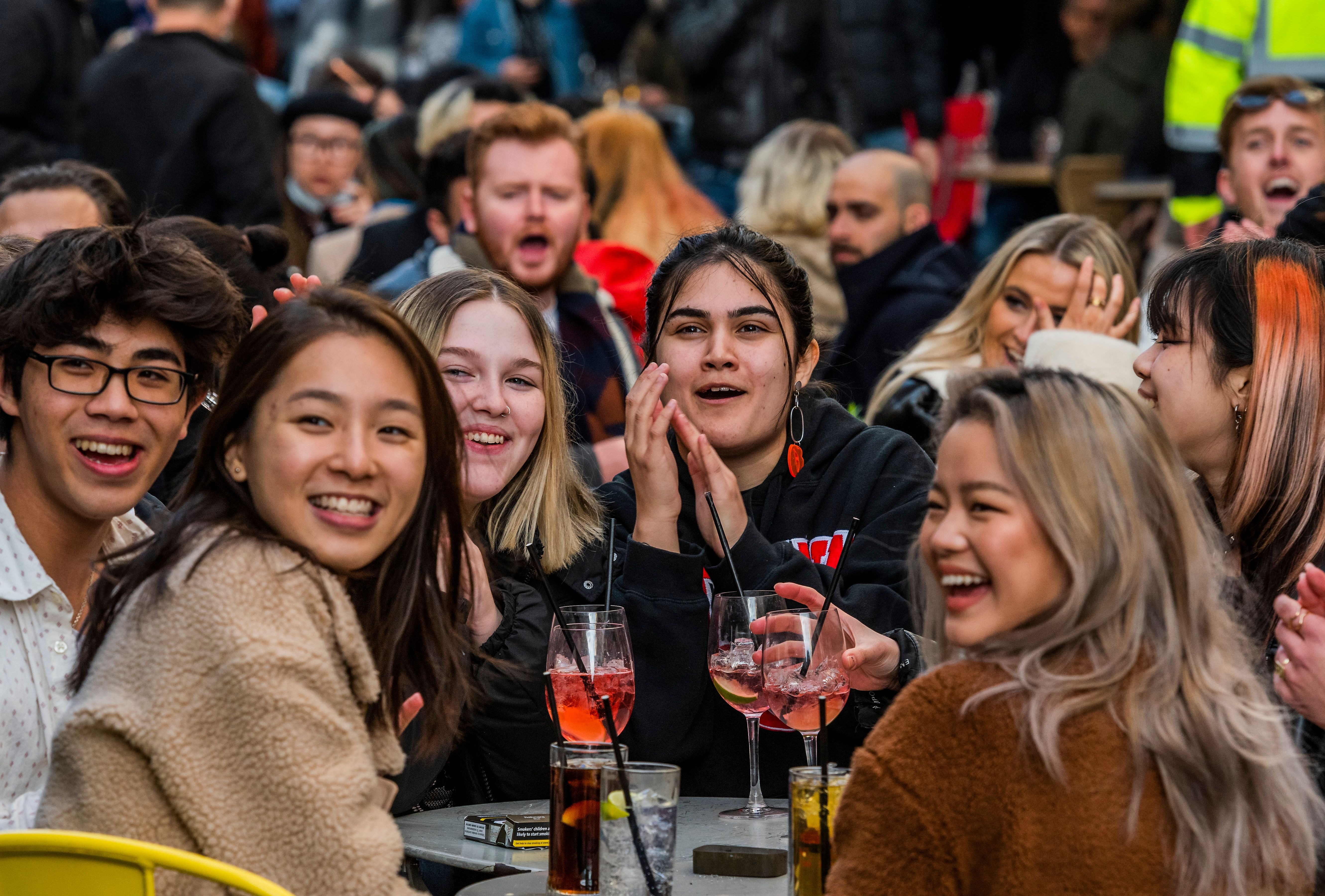 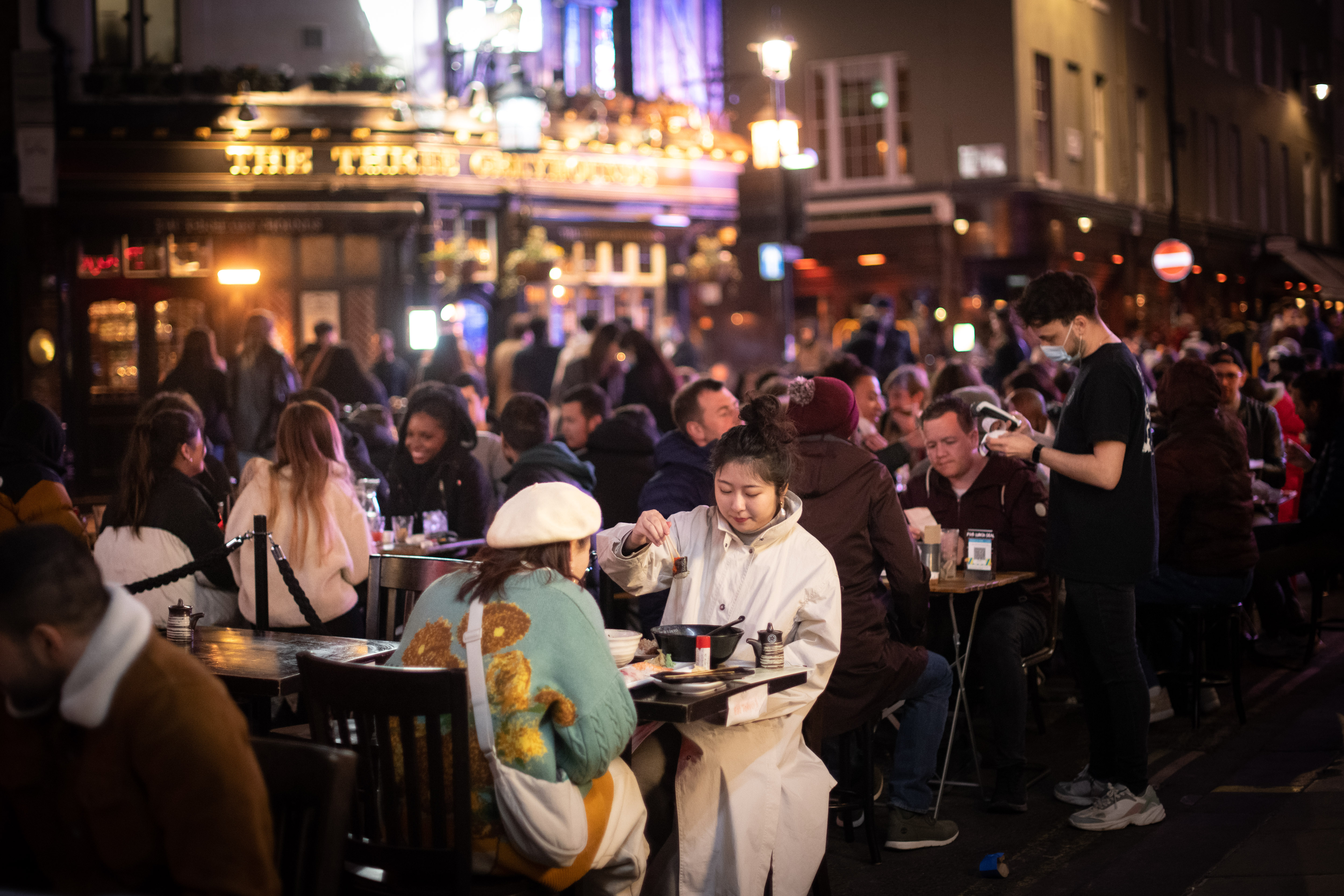 In Serbia, vaccines are free for foreigners and people with or without a residence permit.

Italy has seen 114,000 deaths from the killer bug – the second worst toll in Europe after Britain.

Its health system is still under acute strain – with intensive care units still over capacity, the ISS said, while daily deaths continue to pile up.

Yet in a stark contrast to its European neighbours, much of Britain saw a relaxation of restrictions yesterday, with pubs, restaurants, gyms, hairdressers and nonessential retail opening their doors for the first time this year.

It comes as Italy's government is preparing a new stimulus package worth around 40 billion euros (£34.6billion) to support its coronavirus-battered economy, a source told Reuters news agency.

But its citizens are still not happy – as seen at the protests in the last few weeks.

Speaking at last night’s demo a protestor, Maurizio, said: “To the (Health) Minister Speranza I want to say 'Reduce your salary by 80 percent and let's see how many of these people will make it'.

“Because I cannot keep my company open like this.”

Meanwhile, Silvio Bessone told Reuters: “The problem is we just don't know what to do.

“They tell us that we can only do take-aways, but in my neighbourhood with a population of 3,000, what kind of take-aways can I do?”

Last weekend in Naples, shopkeepers held up lingerie during a protest against Covid shutdowns.

They argued against the Italian government decision to allow some shops to remain open, such as those selling underwear, while ordering others to close.