Paris: Emmanuel Macron has come under heavy fire over his lockdown U-turn as his opposition boycotted a parliamentary vote on tougher coronavirus restrictions and said they would not rubber-stamp the whims of “a monarch”. But the French people appear to be giving their President the benefit of the doubt.

Criticism over Macron’s belated decision to enact tougher measures came as the government confirmed these would include an alcohol ban in public places after scenes of crowds enjoying beers in parks and gardens in Paris and other big cities. 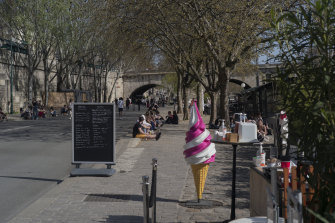 People enjoy warm weather along the Seine river banks in Paris this week before the introduction of tougher measures.Credit:Getty Images

Macron had long rebuffed increasingly strident calls from experts to enact a hard lockdown. Hospital heads had warned they were on the verge of “triage” of patients in hotspots such as Paris. Intensive care occupancy has passed 5000 – higher than in November’s second wave.

The President finally changed tack in a prime-time televised address on Thursday (AEDT), imposing four weeks of domestic travel restrictions across the whole country and closing non-essential shops in line with measures already implemented in virus hotspots. Schools will be shut for up to a month, with holidays extended.

He stopped short, however, of forcing people to remain at home or avoid socialising completely, and authorised travel between regions over the Easter weekend.

During a turbulent parliamentary debate, opposition groups across the board savaged Macron’s go-it-alone COVID strategy.

Jean-Luc Melenchon, of the leftist Unbowed France party, called it a “disgrace” and a “masquerade”. 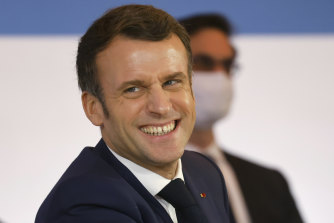 “It really is April 1 today,” he told MPs. “Everything has already been decided and we are invited to come and acclaim […] the presidential monarch, the best virologist in France apparently, and modesty’s best friend. We will boycott this vote.

“You are responsible before history of a health disaster the likes of which this country has never seen. You let the wave rise by aggravating everything.”

Damien Abad, of the right-wing Republicans Party, said Macron had presided over a health “berezina” – a French term for debacle that refers to a humiliating Napoleonic defeat in Russia – that was his “sole responsibility”.

He said the government and Macron, he said were always “one move, one vision, one decision too late”.

Marine Le Pen, the leader of the far-right National Rally, and likely Macron’s main opponent at the next election, said: “In a situation that is turning into health and economic chaos, the country needs to be led more than ingeniously reassured.”

Valerie Rabault, of the Socialists, compared Macron’s unilateral decision to Germany’s Angela Merkel and said: “Does the President think himself more intelligent than the German Chancellor, who takes the trouble to debate for seven hours with regional presidents to reach a consensus, who bothers to get all her decision voted by the Bundestag and who mourns 20,000 fewer deaths than us when Germany has 17 million more inhabitants?”

Despite the boycott from the opposition, the new restrictions were approved because Macron’s LREM party has a majority. 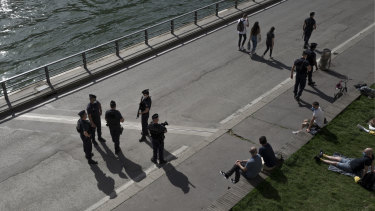 French police work to control people along the Seine river banks in Paris on Wednesday.Credit:Getty Images

In a boost for the President, a Harris poll taken after his televised address suggested that a majority of French people, some 57 per cent, were convinced by his speech, and 71 per cent approved of his measures. In particular, they warmed to his pledge to ramp up vaccinations and push people to work from home.

The pragmatic decision to allow people to move around on the Easter weekend to reach family or second homes before banning travel between regions was appreciated. “We have to be effective in terms of health, accepted on a social level and to protect economically and psychologically,” said one Elysee aide.

Christophe Castaner, the head of the Macron parliamentary camp, dismissed “crisis commentators” saying: “Their soul must be very light when it comes to saying one thing and then its exact opposite.”

Castex said the vaccination rollout was progressing and “being simplified every day. We now have reason to believe that we are advancing along the path of the possible exit to the crisis.”

He said more than 8 million people have received at least one dose of vaccine.

Health Minister Olivier Veran defended the country’s vaccine strategy and decision not to lock down earlier.