Rivalry between the Dogon and Fulani ethnic groups are down to grievances over land and lack of access to food.

An attack on a village in central Mali that left scores of people dead has left the country reeling in shock, underscoring the security challenges confronting it and stoking fears of further violence amid rising ethnic tensions between its Dogon and Fulani people.

The hours-long assault on the village of Sobane-Kou began late on Sunday and continued well into the night.

Survivors described armed men arriving on motorbikes and in trucks and surrounding the village of roughly 300 inhabitants in a largely ethnic Dogon enclave in Mali’s Mopti region. The attackers killed anyone who attempted to flee, set their homes ablaze and slaughtered farm animals, the survivors said.

The government on Monday gave an early death toll of 95, although there are fears the number of those killed could be higher.

There has been no claim of responsibility so far. The attack, however, bore the hallmarks of a cycle of violence – much of it driven by ethnic tensions – that has claimed hundreds of lives in the past 18 months.

In March, nearly 160 members of the Fulani ethnic group were slaughtered by a group identified as Dogon, in one of the worst acts of bloodshed in Mali’s recent history.

“Following that attack, a group Jama’at Nusrat al-Islam wal-Muslimeen and their leader Amadou Kouffa – himself a Fulani -said that the Fulanis will seek revenge for these attacks,” said Al Jazeera’s Nicolas Haque, reporting from the capital, Bamako.

After the Sobane-Kou killings, “a Dogon leader has said these killings are an act of war and that he believes the Fulanis are responsible,” Haque added.

He said the latest killing has “shocked the nation” and is “affecting the fabric of Malian society”.

The rivalry between the Dogon, who are farmers, and the Fulani, who are a sedentary herder group, can be traced back to “deep grievances over land”, Haque said.

“We are at the height of the dry season so there is really a tension over land a scarcity of food, and both communities are suffering from a lack of food and access,” he said.

This is further compounded by government inaction, which Haque described as being “completely overrun by this situation”.

“The crux of this is that the state is not present. The military is not able to provide safety and security for both the Fulanis and the Dogons. Just in the last few months, 488 people are believed to have been killed in this intercommunal conflict.”

Malian President Ibrahim Boubacar Keita cut short a visit to Switzerland and was expected to return to Bamako on Tuesday.

“This country cannot be run by a cycle of revenge and vendetta,” he told ORTM public television in Geneva on Monday, urging Malians to unite to “allow our nation to survive, because this is a question of survival”.

On Tuesday, Prime Minister Boubou Cisse visited Sobane-Kou to “convey the support of the nation and check that security measures have been strengthened”, according to his office.

In a statement on Monday, the head of the United Nations Stabilization Mission in Mali (MINUSMA) condemned the attack as an act of “unspeakable barbarity”.

“The situation has passed the threshold of tolerable, and it is time for the nation to wake up,” Mahamat Saleh Annadif said.

The MINUSMA chief also said that “everybody is responsible” for the “spiral of violence”.

According to spokesman Stephane Dujarric, the UN Secretary-General Antonio Guterres was outraged by the attack and called on all parties in Mali to “show restraint and to refrain from retaliatory acts”. 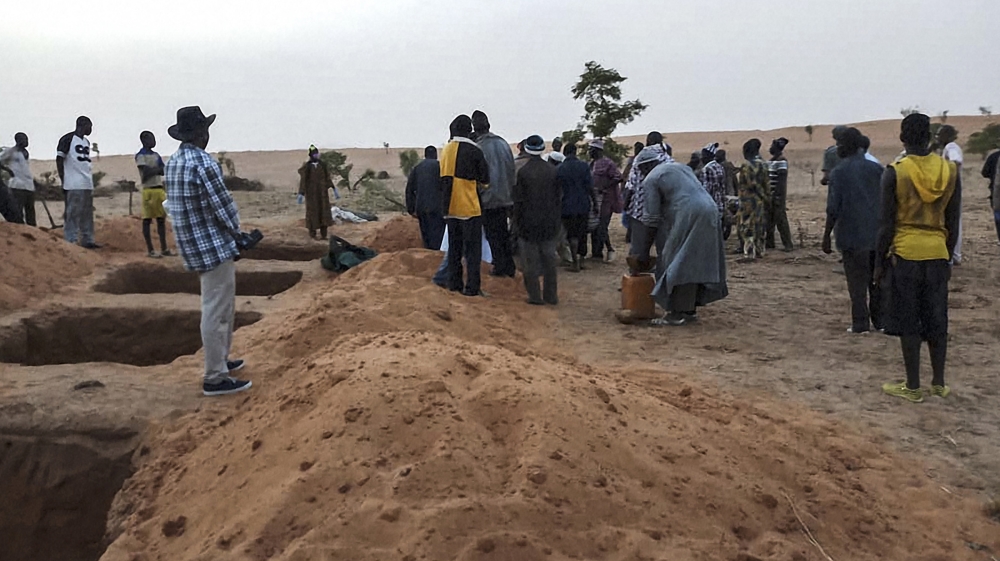 French forces had intervened in Mali, a former French colony, in 2013 to push back an armed advance from the north but the fighters have since regrouped.

There are currently about 14,700 troops and police deployed in Mali, which ranks as the most dangerous UN mission, with 125 peacekeepers killed in attacks since deployment in 2013.

Donor countries to MINUSMA are to meet at the UN Security Council on Wednesday to decide whether to renew the peacekeeping mission in Mali or not.

The decision is expected to be made by June 27.

According to Haque, the French want to see the mission’s mandate renewed, while the United States wants a mission “that can intervene and help forces outside of Mali”.