Opera singer, 42, sues pub after barmaid tricked him into drinking line-cleaning fluid by ‘daring him to down glass of red Ribena’ leaving his throat burned and career ‘destroyed’ 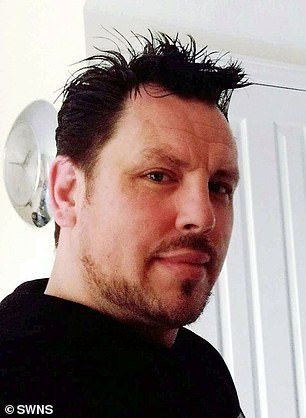 Opera singer Alan Costigan claims he was given beer line cleaning fluid as a prank which caused him extensive injuries to the mouth, throat and stomach, devastating his singing prowess

A talented opera singer claims his career is in tatters after claiming a barmaid gave him a toxic drink as a prank – that burned his throat.

Alan Costigan, 42, said he feared he would die and can no longer sing after drinking the glass of line cleaning fluid given to him by a barmaid.

The opera singer said he had just given the landlady a singing lesson when he was offered a new ‘red Ribena’ by a barmaid and was told to ‘drink it down in one’.

He told of how he started spitting up blood and suffered burns to his mouth, throat, gullet and stomach when he drank it at the Echo Pub in Gravesend, Kent.

A police spokesman said a woman was arrested in connection with the incident but released as there was insufficient evidence to prosecute.

The pub’s insurers have admitted The Echo was ‘in breach of duty’ and liable for the ‘accident’ in December 2017.

But a spokesman for the pub, where Mr Costigan used to work, denied he was given the toxic fluid to drink on purpose.

Mr Costigan said: ‘I was having a coffee, chatting to one of the regulars when the barmaid came up and said why didn’t I try this red Ribena? She said I should down it in one.

‘I drank about half as it was a large amount in a glass that you would serve a vodka and coke in.

‘As soon as I swallowed it I knew there was something radically wrong. 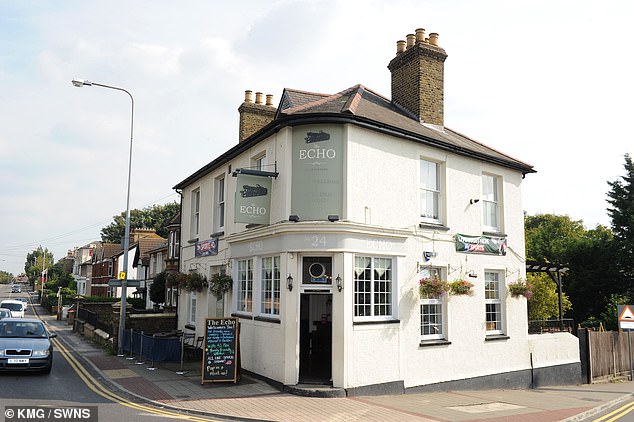 The Echo bar in Gravesend, Kent, pictured, strongly denied a staff member gave Mr Costigan the fluid on purpose but said the substance had been made available to the public by error

‘It immediately burnt my throat and I could hear her laughing behind the counter and said it was beer line cleaner.

‘I said ‘what have you given me that for?’

‘I immediately got a large glass of water and drank a lot but it wasn’t stopping the burning.

‘I then started spitting up blood and I was really worried.

‘When it went down it was like the hottest thing you could imagine in your throat. It was like I had been drinking molten lava.

‘The pain was excruciating and like nothing I had ever felt before.

‘I honestly thought it was all over for me. 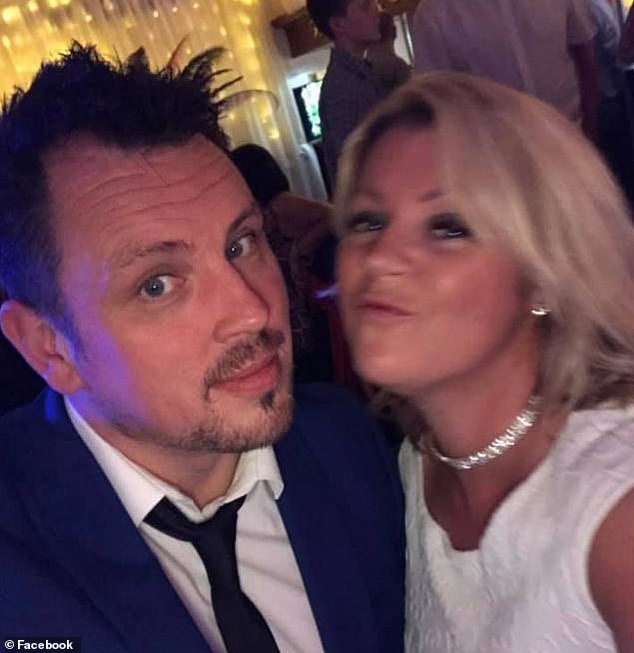 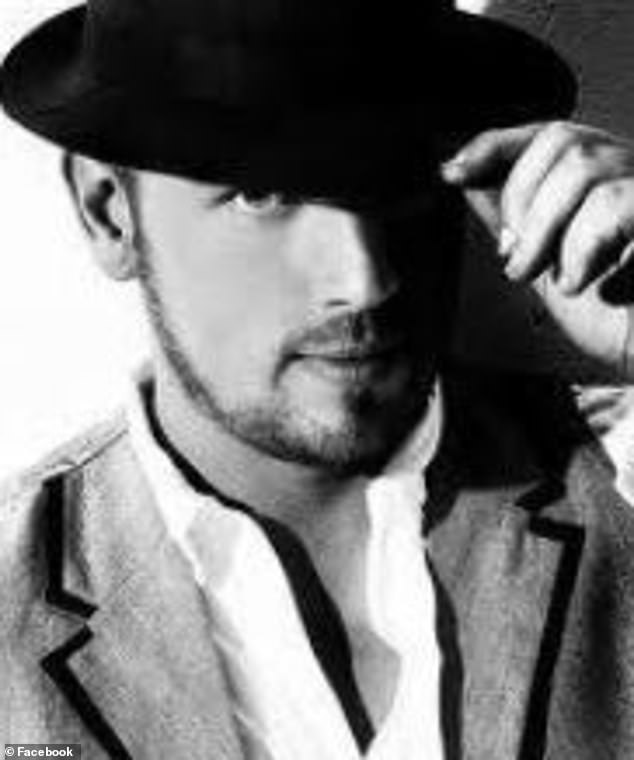 Mr Costigan, pictured said his breathing has been affected by the injury 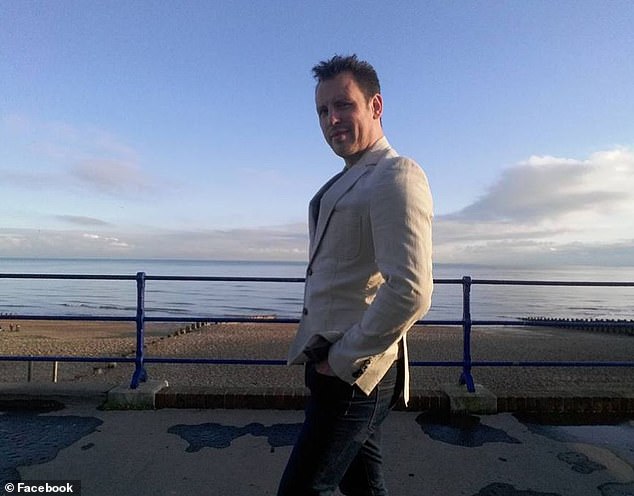 Mr Costigan said his self confidence has been destroyed since his injury. He said prior to drinking the fluid he was capable of standing in front of an audience and singing. Now he said he is a recluse who suffers from depression

‘I thought she has given me something that was going to kill me.

‘I couldn’t breathe properly and I was coughing up a lot of blood. I was in shock and I thought I was going to die.

‘Where I was coughing up blood it was burning as it came up.’

He staggered home a few hundred yards away before he called the non-emergency NHS hotline 111.

He said: ‘They said it was really serious and that I needed to speak to a poison doctor.

‘They told me not to come to the hospital as they would send an ambulance straight to me.

‘I thought I am dead, it’s over, I’m not going to make it to the hospital.’

He added: ‘From a vocal point of view this has destroyed my career.

‘I’m a recluse, suffer from depression, and have had panic attacks.’ 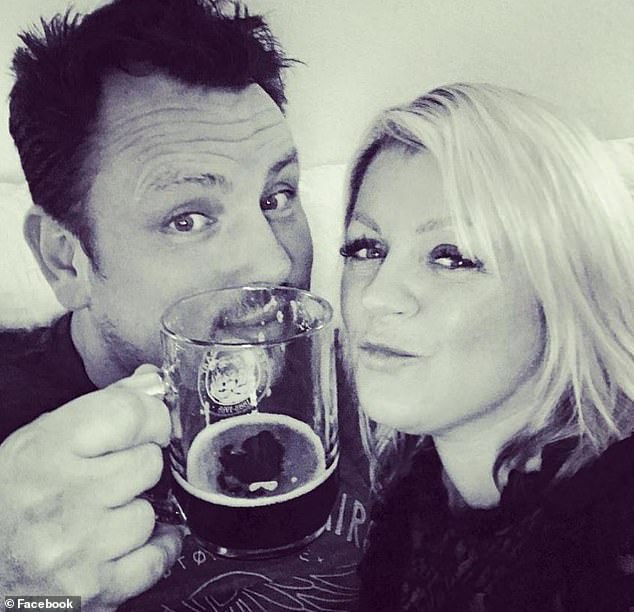 Mr Costigan’s lawyer, Emma Hall said it is not known what the long-term effects of drinking the fluid are. She said he suffered psychological as well as physical damage from the incident

He said his balance, nervous system and breathing had also been affected, adding: ‘I will never be the same again after what happened to me.

‘This has ruined my life.

‘Even if I was able to sing I don’t know if I will ever be well enough to perform again.’

He has instructed personal injury specialists from Hodge Jones & Allen to take legal action against the pub.

His lawyer Emma Hall said: ‘My client’s life has been devastated, all because a barmaid thought it would be funny to get him to drink a highly toxic and poisonous substance.

‘He has been left with severe psychological injuries as well as the physical trauma he has suffered as a result of consuming the beer line cleaner.

‘In addition he has been unable to work since the incident and does not know what the long term effects are to his health.’

A spokesman for The Echo said: ‘The allegations have been vehemently denied other than one element, which was that a substance was made available to the public in error.

‘The barmaid denied that anything was done as a prank – she didn’t say he should drink it. She wasn’t aware that he had drunk it until afterwards.’

Police confirmed they had received a report of an assault related to the consumption of pipeline cleaner at The Echo in Gravesend, Kent on December 1 2017.

A spokesman for Kent Police said: ‘Officers carried out a full and thorough investigation and arrested a woman in connection with the incident but there was insufficient evidence to proceed with a prosecution.

‘The investigation has therefore been filed pending any further information coming to light.’