One man was caught in a very prickly situation after discovering a giant porcupine standing in his kitchen.

Tim Baynham said he had only left the back door open for a few seconds at his home in Hoedspruit Wildlife Estate, South Africa.

The 43-year-old, who lives with wife Tracy and his stepdaughter, briefly stepped out of the room before he heard a noise and went back to investigate.

But wildlife consultant Tim was surprised to discover a 20kg African porcupine staring back at him.

In the clip, which was recorded at around 9pm on March 24, Tim walks through his home before rounding the corner to reveal the African porcupine.

The wild rodent spots Tim but remains still for a few seconds with its massive quills standing to attention.

It then turns tail to make its way back toward the door and out on to the patio.

But Tim whispers to it in a hushed tone: ‘Excuse me?’ 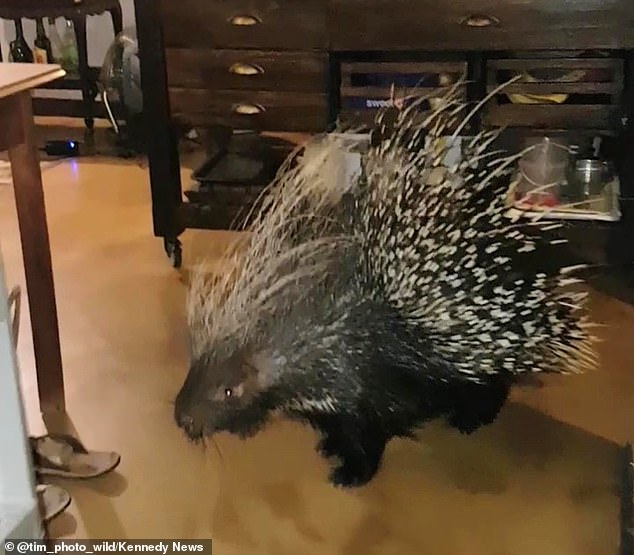 Tim Baynham said he had only left the back door open for a few seconds at his home in Hoedspruit Wildlife Estate, South Africa, before discovering a 20kg African porcupine in his kitchen 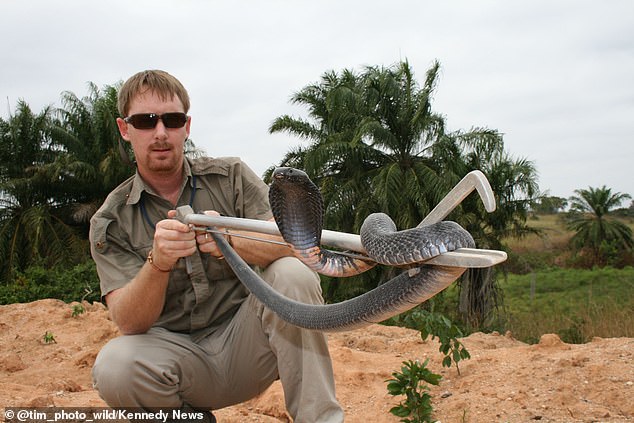 The 43-year-old (pictured), who lives with wife Tracy and his stepdaughter, said he has had many animals in his house over the years inclduing vervet monkeys, baboons, snakes, monitor lizards and warthog

The porcupine then turns its head to look at the homeowner once again before making its way back into the wilderness.

Tim said: ‘When I heard the noise in the kitchen I quickly went to check what was going on. When I saw the porcupine there, I quickly chased it out.

‘We don’t get many visitors on the estate so I was sure it wasn’t a human intruder but I certainly didn’t expect such a large animal to be there. I thought it might have been a bush baby.

‘I know this particular porcupine well. We call it Spikey. They are a regular visitor around the house and try to get in every now and then but usually I am around to stop them. 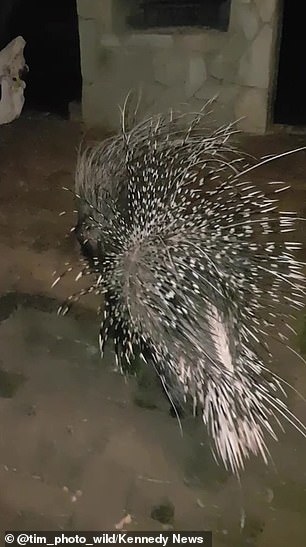 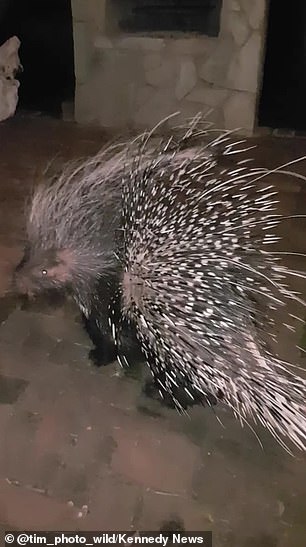 ‘This time I had left the door open and left the room. Pretty much as soon the porcupine saw me it went back out the door and carried on foraging outside.

‘We have had many animals in the house over the years – vervet monkeys, baboons, snakes, monitor lizards and warthogs. One day I came home to find three warthog in the kitchen and the lounge full of monkeys.

‘All these animals are completely wild. They have just gotten used to living in close proximity to humans.’