HS2 to fuel the Northern Powerhouse: Manchester Piccadilly and Airport will get two more stations for high-speed trains while extra northbound line will run to Crewe under proposed changes

Manchester’s HS2 stations are today at the centre of proposals to boost connections between the high-speed railway and Northern Powerhouse Rail.

Platforms at Manchester’s Piccadilly and Airport stations could be expanded, with an extra northbound HS2 service from Crewe also up for consideration.

A public consultation was launched by HS2 Ltd on the proposed design changes to phase 2b – expected to come after phase 1, from London to Birmingham, is complete in 2026. 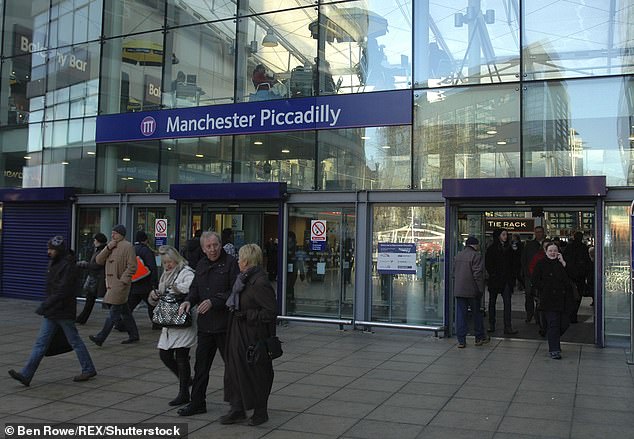 Platforms at Manchester’s Piccadilly (pictured) and Airport stations could be expanded, with an extra northbound HS2 service from Crewe also up for consideration

HS2 Minister Andrew Stephenson said: ‘HS2 and Northern Powerhouse Rail are an integral part of this country’s future rail network, vital for improving connections between our biggest cities and regions, boosting jobs and kickstarting economic growth as we build back better.

‘This consultation will ensure passengers and business have their say in delivering a rail network that meets their needs, providing better journeys across the Midlands and the North as quickly as possible.’

Introducing the consultation documents, he wrote: ‘The Government is committed to taking forward High Speed Two (HS2) to transform our national rail network, bring our biggest cities closer together, boost productivity and level up opportunity fairly across the country. 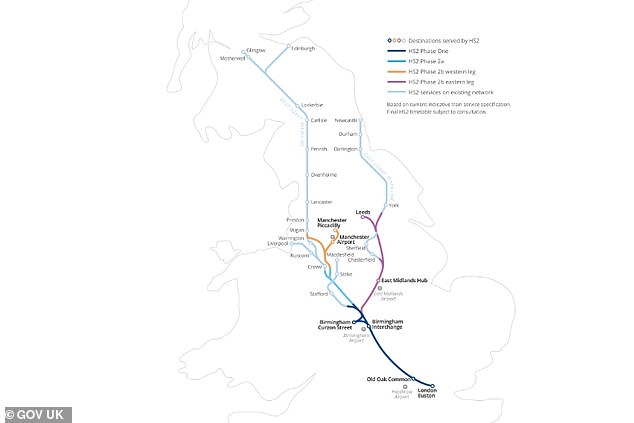 Before: The original plan for HS2 (pictured) featured two platforms at Manchester Airport and four platforms for Manchester Piccadilly. The phase currently under construction, from London to Birmingham, is expected to be complete in 2026 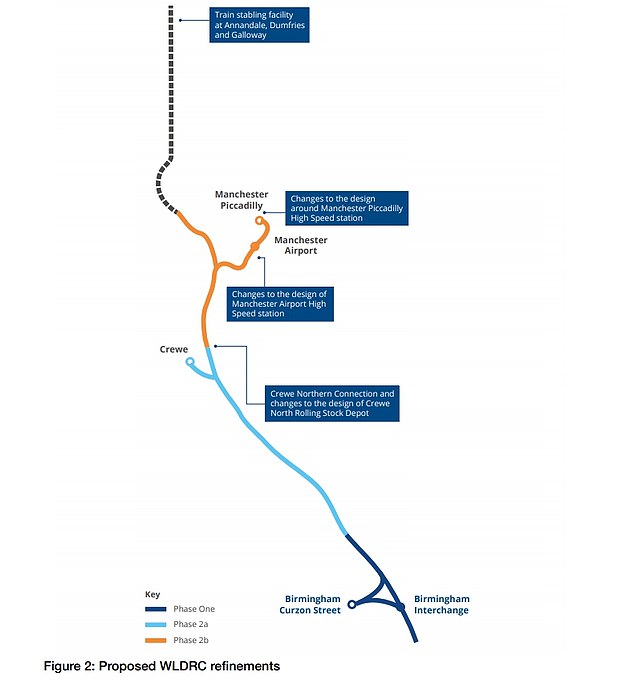 ‘Legislation for Phase 2a, from Birmingham to Crewe, is currently being considered by Parliament and we hope for Royal Assent by the end of the year.’

Enhanced plans for Crewe station could allow it to be served by up to seven HS2 trains an hour.

HS2 Ltd is also consulting on building a new train depot at Annandale, in Dumfries and Galloway.

The consultation has been launched following recommendations from the Government-commissioned Oakervee Review, which said the development of HS2 should be better integrated with other schemes. 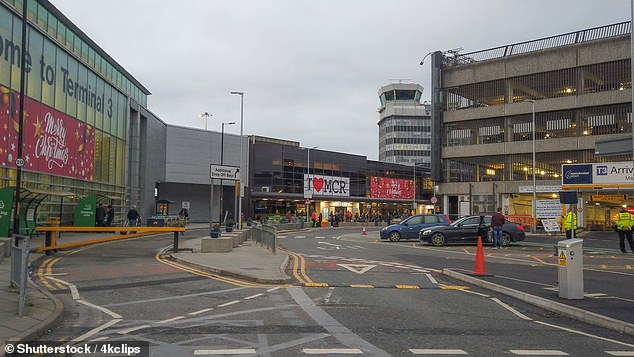 A public consultation was launched by HS2 Ltd on the proposed design changes to phase 2b – expected to come after phase 1, from London to Birmingham, is complete in 2026. Pictured, the proposals affect Manchester Airport’s HS2 station

Northern Powerhouse Rail is a project to improve rail links across the Pennines. Featuring new and significantly upgraded railway lines, it aims to transform rail services between the region’s towns and cities.

What are the phases planned for HS2?

HS2 is planned to be delivered in three phases:

In total, the Government has estimated that the scheme will cost £55.7 billion in 2015 prices (including rolling stock).

Leonie Dubois, HS2’s Head of Consultation and Engagement said: ‘Our latest consultation demonstrates that we’re a step closer to extending Britain’s new railway from Crewe to Manchester, improving connectivity to the North and delivering on the vision for a cleaner, greener transport network.

‘Local communities have an important role to play in informing the final design of the railway and I encourage them to take the time to respond to these proposals.’

Given the go-ahead on January 10, 2012, Europe’s largest infrastructure project moved from enabling works to full construction – with shovels finally going in the ground on September 4.

The Prime Minister said it would create 22,000 jobs.

But many of his own MPs – especially those with constituencies on the route – are deeply against the expensive project.

Its cost has already spiralled from the projected £36billion in 2012 to an estimated £106billion now.

And its chief executive, Mark Thurston, takes home more than four times the Prime Minister with £659,416.

Mr Thurston said: ‘The reality of high-speed journeys joining up Britain’s biggest cities in the North and Midlands and using that connectivity to help level up the country has just moved a step closer.’

Mr Johnson said: ‘HS2 is at the heart of our plans to build back better – and with construction now formally under way, it’s set to create around 22,000 new jobs.

‘As the spine of our country’s transport network, the project will be vital in boosting connectivity between our towns and cities. 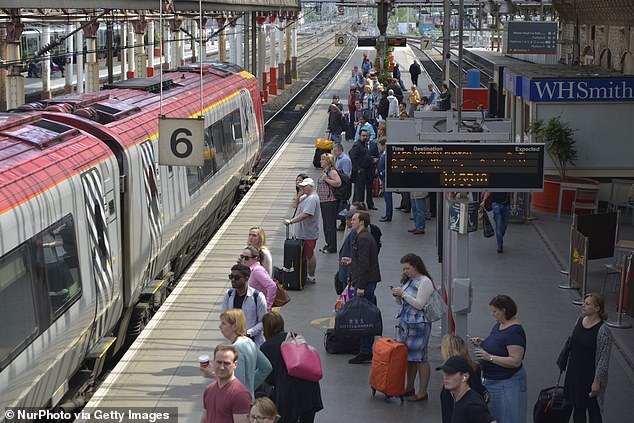 Enhanced plans for Crewe station (pictured, file image) could allow it to be served by up to seven HS2 trains an hour 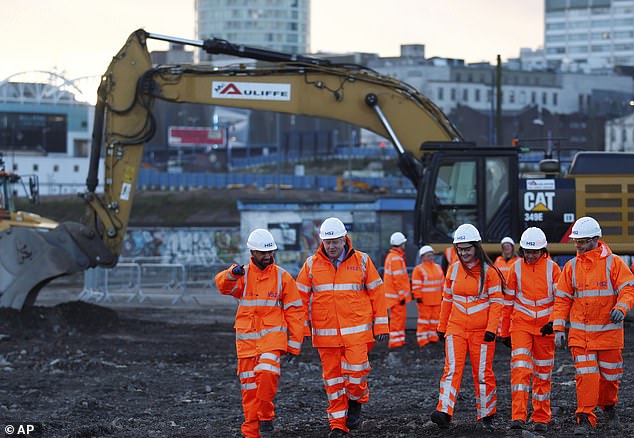 Given the go-ahead on January 10, 2012, Europe’s largest infrastructure project moved from enabling works to full construction – with shovels finally going in the ground on September 4

‘By creating hundreds of apprenticeships and thousands of skilled jobs, HS2 will fire up economic growth and help to rebalance opportunity across this country for years to come.’

HS2 Ltd and its main contractors expect to recruit for around 22,000 roles in the coming years to build the phase one route.

These will include 7,000 jobs in the West Midlands, more than 4,000 building the section from the Long Itchsington Wood site in Warwickshire south to the Chilterns, and 10,000 in the Greater London area.

And HS2 Ltd itself is already directly recruiting for 500 roles over the next three months, with the majority based in Birmingham.