How do we get a better view? Simples! Moment meerkats stand on top of photographer to keep a lookout for predators in Botswana

This is the moment a cheeky group of meerkats used a photographer as a lookout post for potential predators by standing on his head.

Nick Kleer was leading a tour through Makgadikgadi Pans National Park, Botswana, in March, when he lay on the ground to get a better view of the wildlife surrounding him.

Adorable footage shows several of the inquisitive animals wandering around the 34-year-old before clambering up his arms and taking a perch on his skull.

In footage taken by the 34-year-old, the pack of meerkats can be seen using him ‘like a termite mound’. 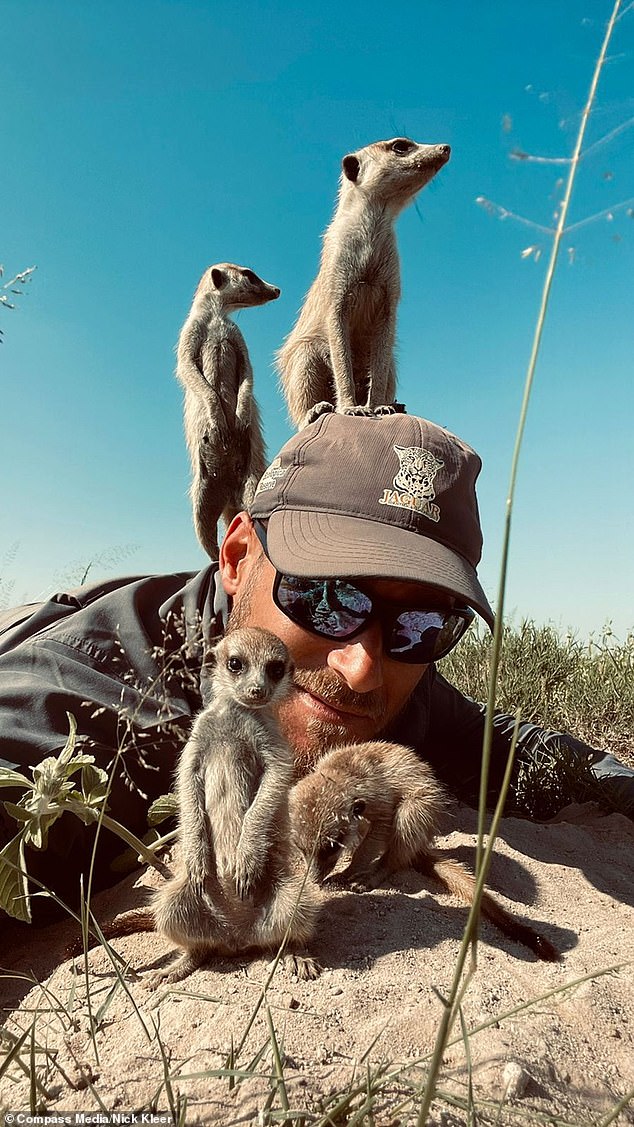 Nick Kleer was leading a tour in Makgadikgadi Pans National Park, Botswana, in March when the magical experience took place 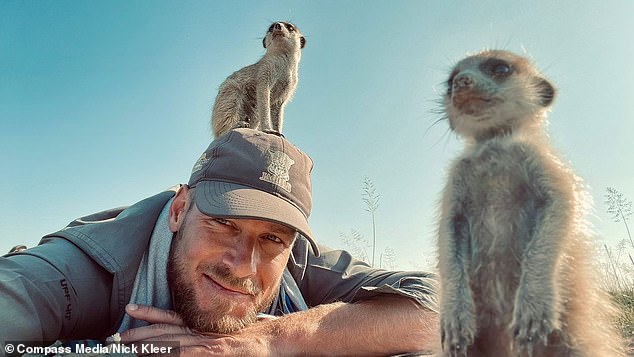 Nick Kleer was leading a tour in Makgadikgadi Pans National Park, Botswana, in March when the magical experience took place

One is stood on top of the South African’s head, while another is perched on his back.

In front of him juvenile meerkats run around, with several looking at him curiously.

At one point three of the cute critters appear to playfight less than a metre in front of him.

Mr Kleer said the group spent 20 minutes around him, with the pack’s female leader being the first to climb on him.

‘The area is very flat, so they use people to get higher,’ he said. 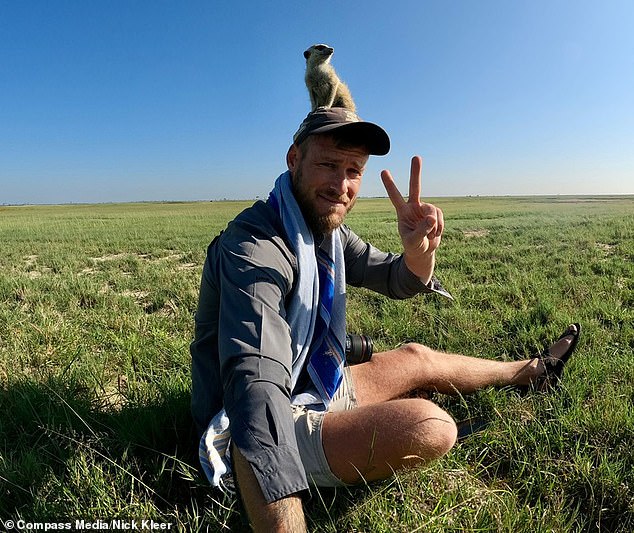 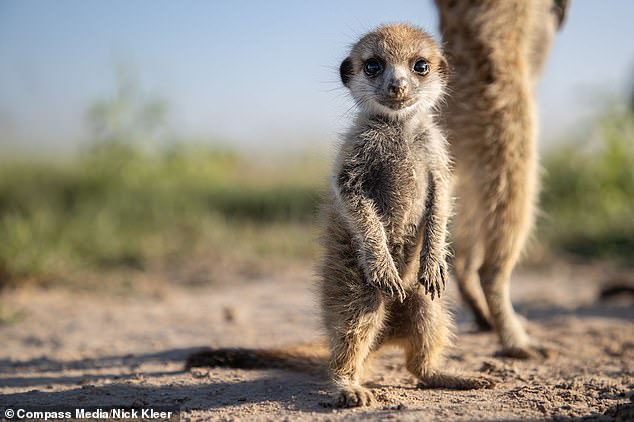 Mr Kleer says the female leader of the group was the first to climb on him, followed by the babies

‘It was the leader of the group that first climbed on to me before the babies joined in.

‘The longest they were there for was 20 minutes. It made me so happy. It’s such a wonderful experience. The babies are extremely cute.

‘The meerkats have become so used to people they don’t see us as any threat. They just use us the same as they would a rock or termite mound to get a better vantage point.

The tour guide said despite using him as a lookout for predators, they seemed to show no fear of him.

He said: ‘They’re very comfortable around people. It has never been encouraged, they just started doing it on their own.

‘There’s nothing to be nervous about. The youngsters scratch at your arm a bit as if they’re digging but it’s more of a tickle than hurting you.

‘They’re very sweet animals. They only want insects, nothing else. 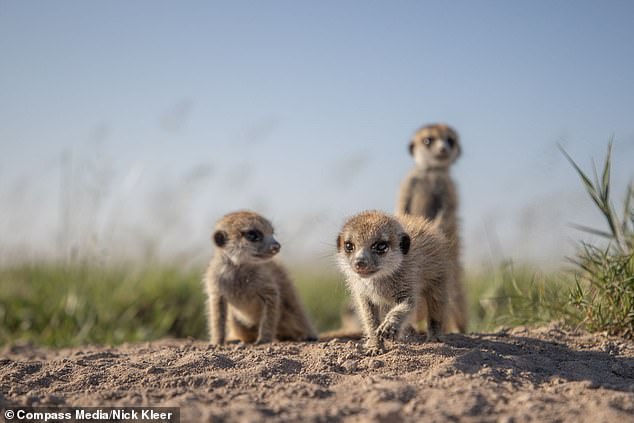 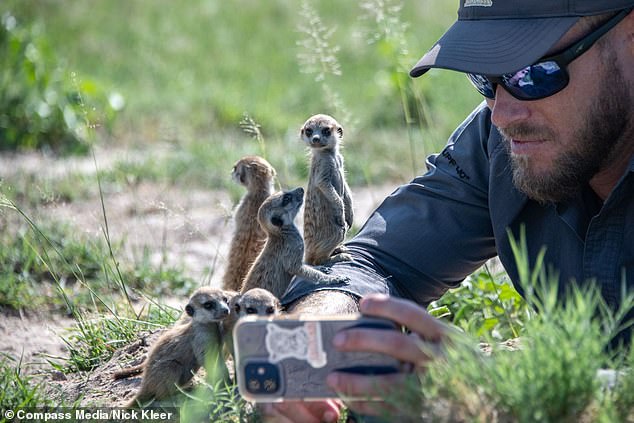 ‘There were five adults and five youngsters that we were trying to photograph. A few of them used my head as a vantage point.

‘I like to be down low for my photography and the meerkats let you know if they want to climb on to you. They look at you and if you lean over, they’ll clamber on board.

‘I’ve been a guide for more than 13 years now and I organise private trips around the world including to Brazil, India and Alaska.’

He shared part of the footage on Instagram, where it has now been viewed more than 13,000 times, with many people left jealous of the experience. 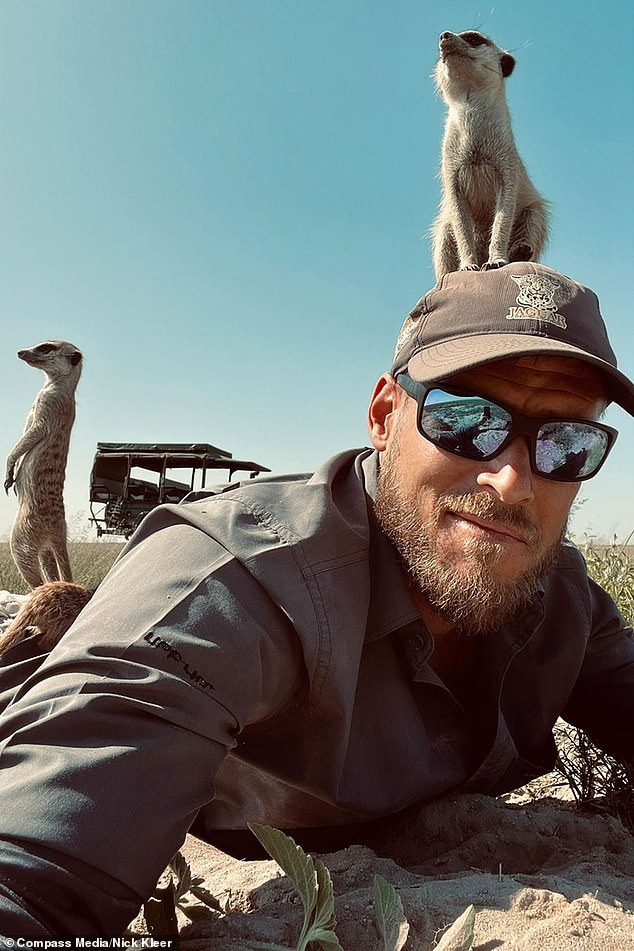 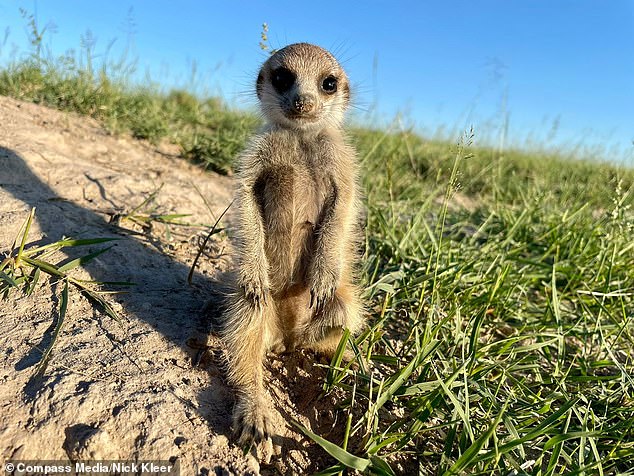 Mr Kleer said: ‘They are very comfortable around people. It has never been encouraged, they just started doing it on their own’

@onebargainatatime said: ‘Love it. Wait til he finds out how far he can see if you stand up.’

@Irainm wrote: ‘They got a great view from up there! That’s a once in a lifetime event. So cute.’

@michele_murgianu added: ‘So lovely haha. The one above your hat feels like the king of the world.’

While @if_paul_can_do_it joked: ‘That’s one way to compare the market.’

Users on Instagram were overcome by the situation, with one describing it as a ‘once in a lifetime event’

Meerkats are a type of small mongoose found in southern Africa and are well known for standing upright on their rear legs in a ‘sentry’ or ‘sentinel’ position.

Living in packs of three to 25, they sleep in underground burrows, coming to the surface to find food, which often takes the form of beetles, termites, spiders and scorpions.

When outside members of the pack will take it in turns to keep watch for potential predators, standing on two feet as they do so to get a better view.

They will often try to find elevated areas, such as rocks – or in this case Mr Kleer – to help them do this.