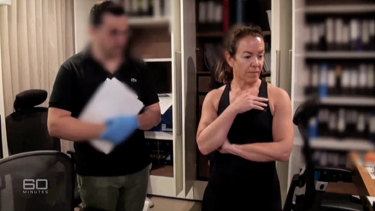 Melissa Caddick during the raid by the AFP. Credit:60 Minutes

“They have clearly ‘lived large’ on investor funds for many, many years,” said Dominic Calabria, a partner at Bridges Lawyers, who has detailed the plight of investors in a “position paper” prepared for court proceedings related to Ms Caddick’s alleged misdeeds.

The law firm, representing 15 investors who claim to have lost almost $6 million, believes a conservative estimate on the amount investors lost could be more than $25 million.

The Federal Court has heard Ms Caddick was involved in “serious misconduct … in connection with the misappropriation of consumer funds.” Financial records show that from January 2018 until September 2020 a total of $20.279 million was deposited into her accounts, and she has since withdrawn all but $700,000 of that.

NSW Police are frustrated there has been no trace of Ms Caddick, 49, in the 13 weeks since she disappeared from her Dover Heights home on or around November 12. 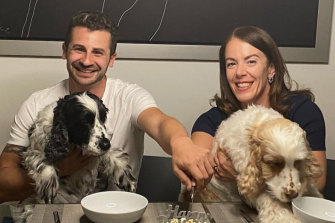 Earlier that week, ASIC had frozen her 14 bank accounts and ordered her to hand over her passport. The following day, Wednesday November 11, Australian Federal Police raided her home on behalf of ASIC. As well as seizing computers and documents, the police also took almost a million dollars’ worth of designer clothes and accessories that Ms Caddick allegedly purchased using investors’ funds.

In his “position paper” Mr Calabria explained how his clients allegedly became victims of the financial adviser “in the hope that other Australians take steps to ensure” it didn’t happen to them.

“In almost all cases, the relationship with Melissa Caddick or her family member spanned a period of two or more decades. The person who made the recommendation had themselves already been unwittingly sucked in,” Mr Calabria wrote.

However, Ms Caddick and her company Maliver produced forged documents to trick investors into believing that she had successfully invested their funds in the stock market.

She was also using someone else’s Australian Financial Services licence, the Federal court has heard.

No “red flags” were raised by investors as Ms Caddick promptly remitted funds whenever withdrawals were requested.

Not only did her clients pay tax on the financial information provided by Ms Caddick, but every investor who had a superannuation account also had that account independently audited, the lawyer wrote.

Two of Mr Calabria’s clients invested as early as 2013. The last client, a lawyer, is understood to have invested only a month before Ms Caddick disappeared. According to court documents, Ms Caddick’s “suspected contraventions” may have started as early as May 6, 2009.

On behalf of his clients, Mr Calabria has objected to investors’ funds being used to pay the $110,000 in legal expenses incurred by Ms Caddick’s older brother, Adam Grimley, who is representing Ms Caddick in the wake of her disappearance. 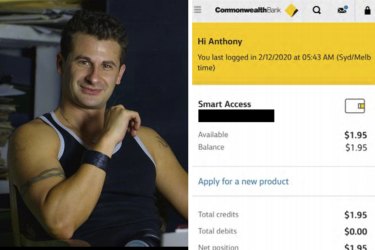 Anthony Koletti, the husband of missing Dover Heights woman Melissa Caddick, has told a court he has only $1.95 in his bank account.

Her alleged victims also want a halt to the $1700 weekly living expenses the court has allowed for Ms Caddicks’s teenage son from her first marriage and her husband Mr Koletti, 38, who told the court he had only $1.95 in his bank account.

This amount is likely to increase as Ms Caddick had pre-paid the mortgage on her home up until March. The yearly mortgages on her home and an apartment in Edgecliff, occupied by Ms Caddick’s parents, total more than $400,000 per year.

“No-one is seeking to ‘punish’ any other innocent member of the Caddick family. The Bridges Investors are sympathetic to the extent that those family members are also victims,” noted Mr Calabria. “In balancing all of the interests, for how long is it reasonable for Caddick family members to continue to live on investors’ funds?” he asked.

There is no suggestion Mr Koletti, Ms Caddick’s son or Mr Grimley knew or had anything to do with Ms Caddick’s alleged fraud or her disappearance.

ASIC’s case against Ms Caddick will return to court on February 22 where the administrators of her company are expected to detail their investigations into where the money has gone.

Catch all the day’s breaking news