Angela Merkel has limited public gatherings to 50 people in covid hotspots but pledged to avoid a national lockdown ‘at all costs’ to preserve Germany’s economy.

Fines will also be issued to those who flout track and trace rules, the Chancellor told a conference of the country’s 16 state leaders on Tuesday.

By European standards, Germany has experienced relatively low infection and death rates so far during the pandemic, but Merkel said cases could hit 19,200 per day if current trends continued.

The country reported 2,089 coronavirus cases on Tuesday, compared to 8,051 in France and 7,143 in the United Kingdom. 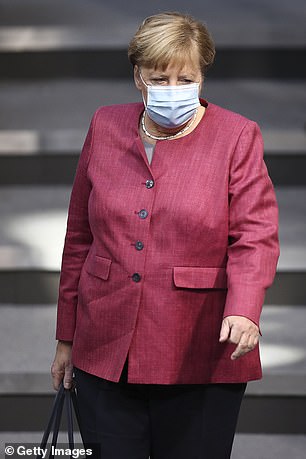 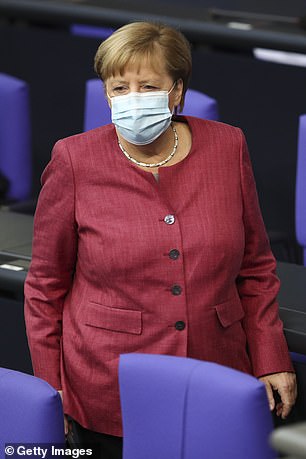 Chancellor Angela Merkel wears a face mask as she arrives to a session at the Bundestag today in the Reichstag building in Berlin, Germany 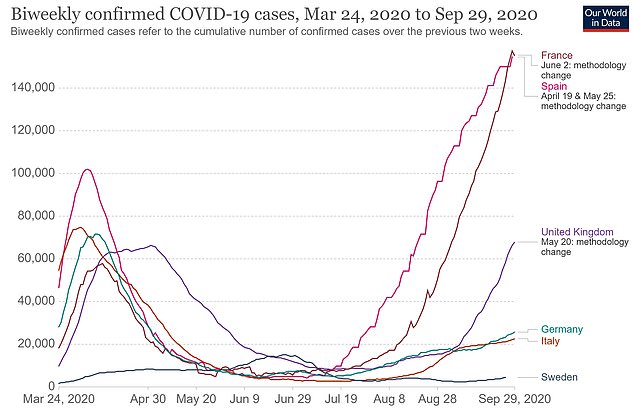 By European standards, Germany has experienced relatively low infection and death rates so far during the pandemic, but Merkel said cases could hit 19,200 per day if current trends continued

Germany has recorded a total of 287,421 cases and 9,471 fatalities, the Robert Koch Institute for infectious diseases said.

‘We have learned a lot and got through the summer well but we know a more difficult time lies ahead – autumn and winter – and a gradual rise, in some areas a significant rise in infections, is cause for concern,’ Merkel told reporters.

She said a ‘hot spot strategy’ would limit private parties to 25 people and public ones to 50 in areas where the infection rate hit 35 per 100,000 over seven days.

The German economy contracted by 9.7% in the second quarter as household spending, company investments and trade collapsed at the height of the pandemic.

Merkel’s government has launched various stimulus measures, financed with record new borrowing, that it and economists expect will help engineer a significant return to growth during 2021.

‘We want to act regionally, specifically and purposefully, rather than shutting down the whole country again – this must be prevented at all costs,’ said Merkel.

Infections have been rising in Germany for weeks but state premiers have been at odds on what action is appropriate, partly because of regional variations in cases.

Merkel said other priorities were for schools and nurseries to stay open.

People who gave false identities to restaurants would be fined 50 euros (£47) and work would be done to improve ventilation in buildings over the winter.