Met Office weather forecasters have extended warnings for the UK, with freezing fog set to continue for the foreseeable future. Four warnings now in place for the country will continue, with some tricky conditions for drivers over the next 24 hours or so. A distinct north-south split has developed in the weather, with the southeast swamped by fog and a wave of icy rain for Scotland. 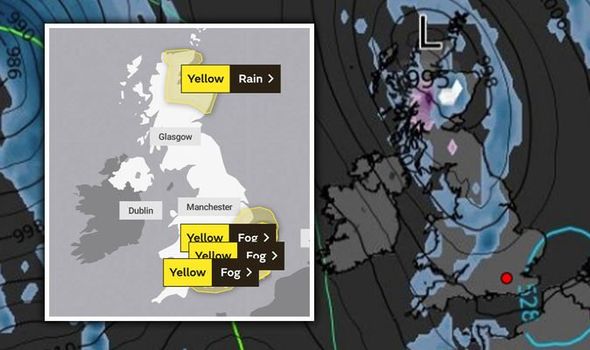 Currently, the Met Office has levelled a total of four weather warnings.

Most of these currently exist in the south, encompassing most of the region and the south and east coasts.

People living in the area will see a covering of thick, freezing fog.

The warning reads: “Fog and freezing fog will persist and become more widespread Monday evening, lasting into Tuesday morning. The visibility is likely to be less than 100 m in places leading to difficult driving conditions and some disruption to transport. The odd icy stretch is also possible.”