Moderna's COVID-19 vaccine appears set for regulatory authorisation in the United States this week after Food and Drug Administration staff endorsed it as safe and effective.

The coronavirus pandemic has killed more than 300,000 people in the US and the government is counting on the Moderna shot to help fulfil its promise to inoculate 20 million people this month. 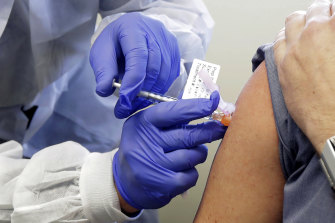 A trial participant receives a shot in the first-stage safety study of Moderna’s COVID-19 vaccine. Credit:AP

An FDA decision on whether to issue a so-called emergency use authorisation for the Moderna vaccine will be made after a panel of outside advisers meets on Thursday, US time. The FDA typically follows the advice of the panel, but is not required to do so.

Moderna's is the second vaccine the FDA has considered, behind one from Pfizer and Germany’s BioNTech , which was authorised last week. Hospitals in the US began giving the Pfizer shots on Monday.

The New York Times, citing unnamed sources, reported that the FDA decision on Moderna's vaccine would be on Friday. The FDA did not immediately respond to a request for comment on The New York Times report.

FDA staff said in documents prepared for that meeting that a two-dose regimen of Moderna's vaccine was highly effective in preventing confirmed cases of COVID-19 and did not raise any specific safety issues in adults over the age of 18.

Moderna released data in documents supporting previous statements that the vaccine may prevent some asymptomatic infections of COVID-19.

It said 38 trial participants in the placebo arm of its trial tested positive for COVID-19 without exhibiting symptoms at the time of their second dose – nearly triple the number in the vaccine arm of the trial.

Both Moderna and Pfizer designed their late-stage trials to show that their vaccines were capable of preventing more significant forms of COVID-19, in the hope that the shots could prevent hospitalisations and deaths.

But preventing asymptomatic infection is also important and could reduce the chances of vaccinated people infecting the unvaccinated, further stemming the spread of the disease.

The FDA said that there appeared to be some protection for trial participants after the first dose of Moderna's vaccine, which is given in two shots, with 28 days between inoculations, but there was not enough information on longer term protection.

It said that vaccine efficacy was 80.2 per cent in participants who only received one dose at the time of the interim analysis, which was based on data collected as of November 7.

But the FDA said it could not draw a conclusion because the numbers of participants and time of observation were limited and there was no single-dose arm in the 30,000 person trial.

Moderna said trial participants, half of whom received a placebo, may request to find out if they had a placebo or the vaccine so that they can get either the vaccine or another vaccine potentially available outside of the trial.

The FDA staff said that serious side effects in the trial of the vaccine represented medical events that occur in the general population at a similar frequency as observed in the study.

The FDA did flag the possibility that the vaccine was contributing to Bell's palsy, a type of facial paralysis also reported by participants in the Pfizer trial.

Moderna reported four cases of Bell's palsy, including three among people who had the vaccine and one in the placebo group. The company said that three of the cases had resolved itself.

Although the FDA said that the trial participants with Bell's palsy had predisposing factors, the "potential contribution of the vaccine to the manifestations of these events of facial palsy cannot be ruled out".

Pfizer reported six cases of Bell's palsy, including four in the vaccine arm, which it said was a rate typical of the general population.

The death rate during the trial was in line with death rates in the general population for patients of this age, the documents said. There was only one COVID-19 related death, a patient who received the placebo.

Moderna shares, which have risen nearly eight-fold this year up to Monday's close, were up 1.8 per cent before the bell.