Millions of Australians will have to wait longer for a vaccine as the federal government works to ramp up domestic production and reorganise the national vaccine rollout.

Prime Minister Scott Morrison announced on Friday that the government had secured 20 million more doses of the Pfizer vaccine, which will arrive from October. It doubles Australia’s order from Pfizer as the government acknowledged changes to medical advice on the AstraZeneca vaccine would further delay the national immunisation program. 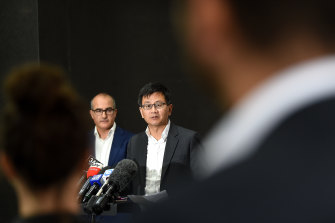 Mr Morrison said the government could not yet outline a timetable for the “recalibrated” rollout. “We’re not in that position,” he said when asked whether all adult Australians would have at least one dose by Christmas.

Professor Allen Cheng, Victoria’s Deputy Chief Health Officer and co-chair of the national expert advisory panel that recommended that Australians aged under 50 not receive the AstraZeneca vaccine unless they chose to do so due to personal circumstances, acknowledged that the advice meant a delay in the already behind-schedule vaccine program.

The abrupt decision based on younger people being at greater risk of experiencing a rare blood clotting disorder following AstraZeneca vaccination caused confusion across Melbourne on Friday, with hundreds of patients cancelling GP appointments to receive their vaccinations. Scores of healthcare and emergency services workers aged under 50 were tuned away from mass vaccination centres.

One Melbourne doctor told The Age that many of his colleagues were planning to pull out of the program to administer the vaccine.

“I have already been contacted by two doctors who have said ‘I’m out, we’re not going to do this anymore’,” Spotswood GP Todd Cameron said. “A lot of doctors … are saying the hassle for the output is just not worth it.”

Experts on the national expert advisory panel told The Age that they had spent almost a week weighing up the call to make the Pfizer vaccine the preferred shot for people under 50, following the hospitalisation last Friday of a Melbourne man who contracted a rare blood clotting syndrome after getting the AstraZeneca vaccine.

Eastern Health could not confirm on Friday whether the man was still in Box Hill Hospital.

The Prime Minister stressed that the advice about the AstraZeneca shot was not a ban.

“There was no instruction not to take that vaccine,” he said. “There is an acknowledgement of the risk that is there, but as is the case always with these matters, these are decisions for Australians.”

State governments reacted quickly as they waited for information about how younger people could consent to the AstraZeneca vaccine. Victorian Health Department ordered vaccination appointments for people under 50 to be cancelled until consent forms are available which outline the new advice regarding the risks of taking the AstraZeneca vaccine.

NSW cancelled appointments on Friday for the same reason but resumed them on Friday afternoon. 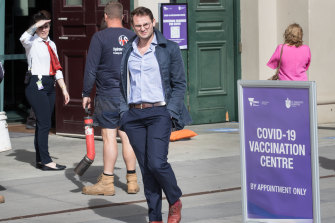 Josh De Bono, centre, was among those turned away in Victoria.Credit:Jason South

Josh De Bono, a cardiothoracic registrar at the Epworth hospital, arrived at the mass vaccination centre at the Royal Exhibition Building in Carlton on Friday morning only to be turned away.

The 34-year-old was one of dozens of people under 50 who were refused entry by security staff including other frontline workers, such as firefighters, police and paramedics.

“I think this will hurt public confidence in the vaccine, and it’s already wavering,” he said. 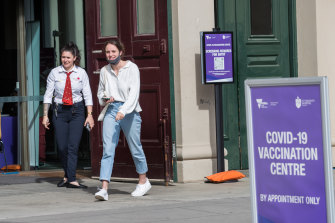 Athena Stathoulis (right ) described the situation as a mess.Credit:Jason South

Athena Stathoulis, 20, a St John ambulance volunteer, arrived about 10.30am only to be told she also no longer qualified for the AstraZeneca jab.

“I knew about the blood clot risk but it’s low, there is more of a risk taking the contraceptive pill,” she said. “I was really confused by it. It’s a mess.”

According to a Health Department statement “until updated consent forms and consumer information are available from the Commonwealth … it is advised that the AstraZeneca vaccine is not administered to eligible persons aged under 50 years”.

Australia had previously bought 20 million doses of the Pfizer shot but was relying more heavily on the AstraZeneca product, which is being made by CSL in Melbourne.

The Prime Minister described the move to secure the extra 20 million doses as “very welcome news”.

Pfizer is currently delivering roughly 130,000 doses a week, but Health Minister Greg Hunt said that would dramatically increase from May, with all 40 million due to be delivered by the end of the year.

“We are working with them on the possibility of bringing forward as many of those doses as possible,” he said.

State and federal leaders met in national cabinet on Friday and pledged to continue to work towards opening up the country, including further options for international travel without the need for quarantine.

Chief Medical Officer Paul Kelly said he was advising his own father to sign up for the AstraZeneca vaccine, as was Mr Morrison with his mother.

“He is 86, he has health conditions and I have advised him to take the AstraZeneca. It’s very safe for him,” Professor Kelly said. “The two doses of that vaccine far outweigh any of the risks, even the issues that we have been raising today.”

Other countries have taken action on the AstraZeneca vaccine this week including the Philippines, South Korea, Portugal and the Netherlands which have suspended it for people younger than 60. Britain has opted to offer people aged under 30 an alternative vaccine if available. Germany decided on an age cut-off of 60 and France has chosen to limit the second jab to people over 55, with second doses being switched out for mRNA vaccines such as Pfizer’s.