‘You are walking over bodies’: British mountaineer reveals how climbing Everest is deadlier than ever thanks to ‘complete beginners’ who cause fatal delays

A seasoned British mountaineer has said that the number of people with insufficient experience has led to rising numbers of deaths on Mount Everest.

Nick Hollis, 45, has recently returned from climbing the world’s highest peak and said that the climb was made harder by the fact the route to the summit was filled with people lacking experience of mountaineering.

This year alone there have been 11 fatalities (nine on the Nepalese side and two on the Tibetan) as increasing numbers of tourists try to conquer the world’s tallest mountain.

Mr Hollis said: ‘What I hadn’t expected to see was so many bodies of climbers who’d died either that day or the day before.

‘It’s no exaggeration to say you are walking over bodies.’ 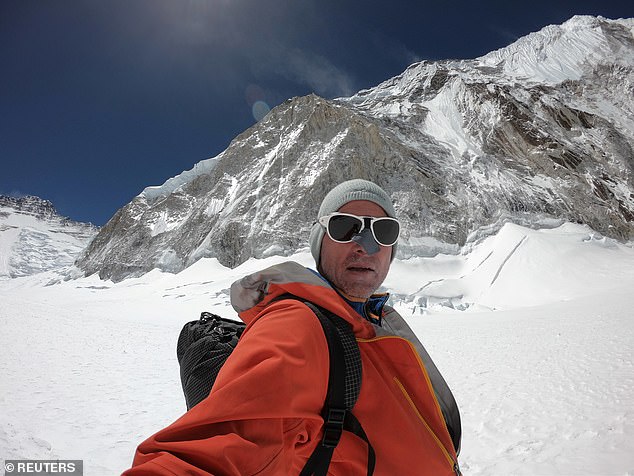 Selfie: Nick Hollis during the course of his recent ascent of Mount Everest, where he saw first hand the fatal consequences of those with insufficient experience attempting the climb 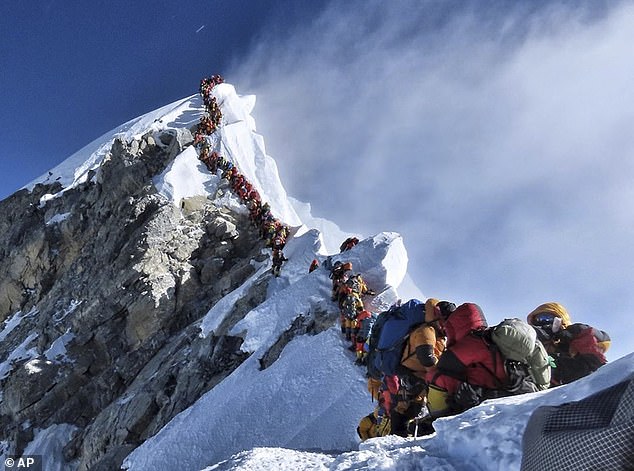 Crowded: a recent picture showing the increasing number of people attempting to climb Mount Everest, if those making the climb lack experience, it can be fatal

By successfully climbing Everest, Mr Hollis joins an elite group who have been to the top of the highest mountain on each continent.

Although the Nepalese Government limits the number of people who can attempt the climb each year through a permit system, Hollis believes the main problem is that many of those attempting it lack the experience to do so.

Upon reaching base camp, Hollis was struck by the number of climbers who lacked basic climbing skills such as using crampons and and securing a harnesses, who’ve been encouraged by unscrupulous tour companies.

He said: ‘These people are complete beginners.

‘When the going gets tough … they become very slow and they’re unable to get through the obstacles and the more technical sections. That’s what creates the bottlenecks.’

With oxygen supplies limited, delays can be deadly. 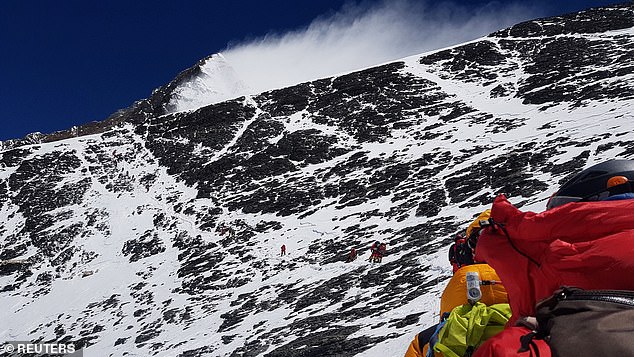 Steep: Hollis on his final ascent to the summit of Mount Everest

Furthermore he doesn’t believe that restricting the number of people allowed on the mountain will make a difference.

Hollis said: ‘If you were to restrict the number of permits down to say 200, you could still have 100 incompetent climbers within that mix.’

Instead, he suggests a screening process whereby permits are allocated to potential climbers based on their experience.

At 8,850 meters, Mount Everest is the world’s highest mountain, Sir Edmund Hilary and his Sherpa Tenzing Norgay were the first humans to reach the summit in 1953.

This year, the Nepalese Government issued 381 permits (at a cost of $11,000 each) meaning once Sherpa and guide support was included, 800 people were attempting to reach the summit this year.