North Korea has rebuffed South Korea’s push for a political declaration to formally end the Korean War 71 years after the conflict started, saying it could be used as a “smokescreen covering up the US hostile policy”.

While fighting between the neighbouring countries lasted from 1950 until 1953, no peace treaty was ever signed, leaving the nations technically still at war.

In a speech at the UN General Assembly earlier this week, South Korean President Moon Jae In reiterated his calls for an end-of-the-war declaration that he said could help achieve denuclearisation and lasting peace on the Korean Peninsula.

Senior North Korean official Kim Yo Jong, the powerful sister of leader Kim Jong Un, said Mr Moon’s proposal was “interesting and admirable” but that conditions were not right because of South Korea’s persistent double standards, prejudice and hostility. 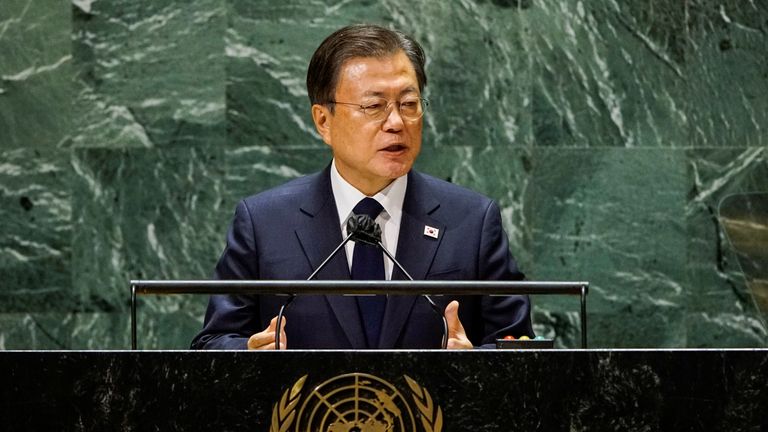 “Under such a situation it does not make any sense to declare the end of the war with all the things, which may become a seed of a war between parties that have been at odds for more than half a century, left intact,” Ms Kim said in a statement reported by the North’s official KCNA news agency.

“It should be clearly understood that the declaration of the termination of the war is of no help at all to stabilising the situation of the Korean Peninsula at the moment but can rather be misused as a smokescreen covering up the U.S. hostile policy,” Mr Ri said in a statement carried by state media.

He said American weapons and troops deployed in South Korea and its vicinity and regular US military drills in the region “all point to the US hostile policy toward (North Korea) getting vicious day by day”.

North Korea has also long described US-led economic sanctions as proof of US hostility against the North.

South Korea’s Unification Ministry responded by saying it would continue its efforts to adopt the end-of-the war declaration and strengthen cooperation with related countries.

Cha Duck Chul, a deputy ministry spokesman, said declaring the war’s end would be “a very meaningful step” as it could be a starting point for peace negotiations and denuclearisation on the peninsula.

The Korean War ended with an armistice, not a peace treaty, leaving the peninsula in a technical state of war. North Korea has wanted to sign a peace treaty with the United States to formally end the war and for subsequent improved relations.

Some experts say the peace treaty could allow North Korea to demand the United States withdraw its 28,500 troops in South Korea and ease sanctions.

Both Koreas had called for an end-of-war declaration to be made and a peace treaty to be signed during the period of diplomacy with the United States that began in 2018, and there was speculation then-President Donald Trump might announce the war’s end in early 2019 to convince North Korean leader Kim Jong Un to commit to denuclearisation.

No such announcement was made as the diplomacy faded to a stalemate over easing the sanctions in return for North Korea denuclearising.