Left-wing activists are calling for a boycott of The Big Issue because it ran an interview with Countdown star Rachel Riley in which she expressed support for Sir Keir Starmer’s efforts to purge Labour of antisemitism.

Simon Maginn, who backs Sir Keir’s predecessor Jeremy Corbyn, tweeted that he had written to Lord Bird, who co-founded the magazine 30 years ago to help raise funds for the homeless, to protest at Ms Riley’s inclusion.

‘Very disappointed that @BigIssue would publish that Rachel Riley piece,’ he wrote. 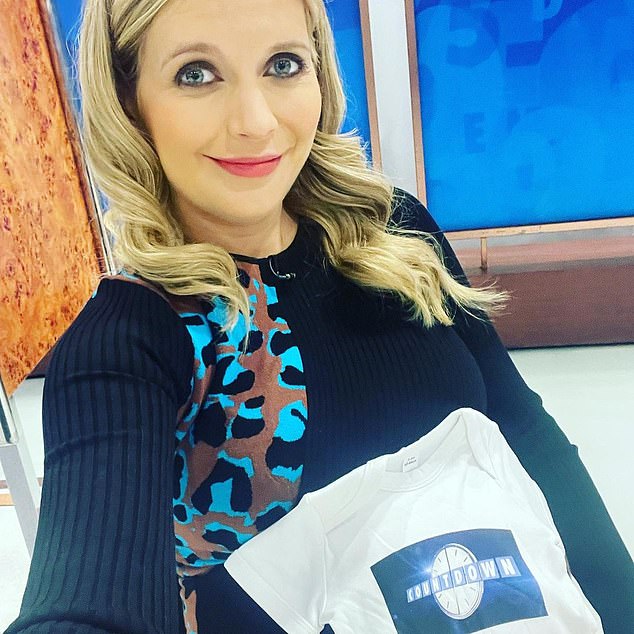 Rachel Riley, 35, who has Jewish roots and is eight months pregnant with her second child, has spoken about the antisemitic abuse she has faced

‘I’ll be boycotting you now until you offer a right of reply. There are many other ways of helping the homeless. I won’t support or defend hate, and neither should you.’

Jackie Walker, a former official with the pro-Corbyn Momentum group who was expelled from Labour over antisemitism allegations, tweeted: ‘This is why you shouldn’t buy Big Issue again.’

Ms Riley, 35, who has Jewish roots and is eight months pregnant with her second child, has spoken about the antisemitic abuse she has faced.

Since the interview’s publication Ms Riley has been called a ‘Zionist shill,’ ‘a Right-wing hag’ and a ‘disgusting evil woman’

In an interview with the latest Big Issue, she says Sir Keir has ‘a tough job to try to bring his party back to what it was’ and suggests he and his frontbenchers ‘know they’re not electable’ unless they rid it of antisemitism.

Since it was published, trolls have described Ms Riley – an ambassador for the Centre For Countering Digital Hate campaign group – as a ‘Zionist shill,’ ‘a Right-wing hag’ and a ‘disgusting evil woman’.

One even claimed: ‘The homeless are suffering because of Rachel Riley.’

Lord Austin, a former Labour Minister who quit the party in 2019 over its ‘culture of extremism and antisemitism’, slammed demands for a boycott. 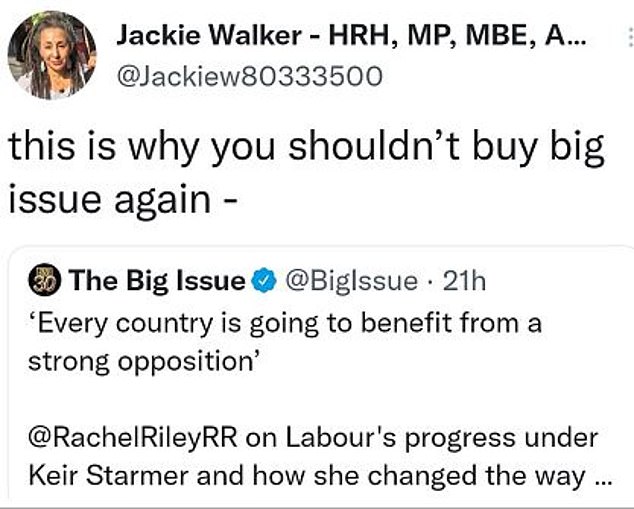 Jackie Walker, a former official with the pro-Corbyn Momentum group who was expelled from Labour over antisemitism allegations, tweeted that people shouldn’t buy The Big Issue again

‘These people are a complete disgrace,’ he said.

‘They would rather homeless people lose out and go hungry because The Big Issue contains an interview with Rachel Riley, who they hate because she campaigned against racism.

‘I hope everyone will go out of their way to buy a copy this month.’

Labour MP Neil Coyle said: ‘Anyone suggesting we don’t buy The Big Issue and ignore homeless people because it is also exposing racism reveals quite how these people sank Labour and why they must never again be trusted to be anything other than a factional cult.’

Crossbencher Lord Bird, 75, was once in the hard-Left Workers Revolutionary Party. Ostensibly neutral, The Big Issue is seen as Left-wing.