Home » Once again, South Africa finds itself halting use, at least temporarily, of a Covid-19 vaccine it had bet on. 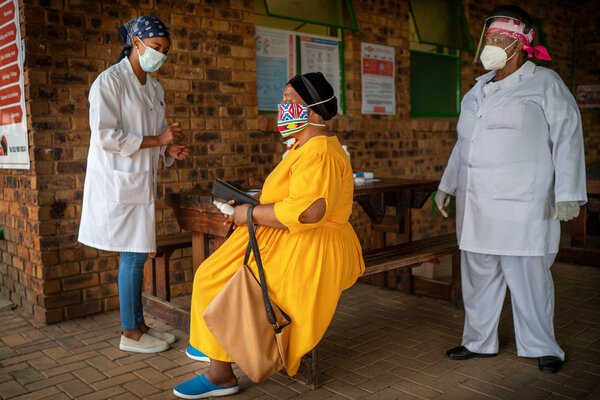 South Africa has faced blow after blow to its pandemic-control efforts: A worrisome variant swept across the country, driving a devastating second wave of coronavirus cases. Then officials had to scramble for an alternative when the vaccine it had bet on, from AstraZeneca, proved ineffective against the variant, which can partially dodge the body’s immune system response.

Now the alternative — Johnson & Johnson’s single-dose vaccine, the only one now in use in South Africa — has run into trouble as well, over concerns of rare blood clots that emerged in a handful of people in the United States who had received the shot. It is unclear whether the vaccine is responsible.

South Africa’s health minister, Dr. Zwelini Mkhize, announced on Tuesday that the country would temporarily halt its vaccine program for medical workers, which has inoculated around 290,000 people so far. Dr. Mkhize said he expected the program — a clinical trial — to resume in a few days, after the authorities have had a chance to look into the blood clot cases in the United States.

“Science must be respected at all times, although this may mean a disruption in our plans,” Dr. Mkhize said on Tuesday.

South African health authorities have been gearing up to extend vaccinations to the general public starting in May. That program relies on 30 million doses of the Johnson & Johnson vaccine and 30 million of the two-shot Pfizer-BioNTech vaccine, which South African officials recently secured.

The country halted use of the AstraZeneca vaccine after evidence emerged that it did not protect clinical-trial participants from becoming mildly or moderately ill from the variant, known as B.1.351, that is now dominant in the country. South African authorities then pivoted to the Johnson & Johnson vaccine, which is manufactured in the country under license and has a 64 percent efficacy rate in South Africa, according to an analysis by the U.S. Food and Drug Administration.

Health experts say that the decision on Tuesday to pause vaccinating health care workers is the kind of thing that happens often in clinical trials, and that it probably won’t have any major implications for vaccinating the general public.

“At the moment, there is nothing to indicate that this will delay the national rollout program,” said Dr. Richard Lessells, an infectious diseases specialist at the KwaZulu-Natal Research and Innovation Sequencing Platform.

Even so, if evidence emerges to implicate the Johnson & Johnson vaccine in blood clotting problem, and health officials begin to question its safety, it could be a devastating blow for South Africa, the African country hardest hit by the coronavirus, as it races to inoculate its population before an even more dangerous variant appears.

“The U.S. has access to other vaccines to fill a gap, in terms of not using the Johnson & Johnson vaccine,” said Shabir Madhi, a virologist at University of the Witwatersrand who ran the AstraZeneca vaccine trial in South Africa. “That sort of luxury doesn’t exist in other countries, including South Africa.”