Top paraglider crashed into 11,000-volt overhead power cables and died shortly after ringing his fiancée from the air and asking her to watch him land, inquest hears

One of the UK’s top paragliders was killed when he crashed into overhead power cables shortly after ringing his fiancée from the air and asking her to come outside and watch him land near their home, an inquest heard.

Leanna Bishop went into the garden of her home and looked up as Wayne Seeley, 41, descended towards the local school playing field in Eastington, near Stonehouse, Gloucestershire, in June 2020.

But she was then horrified to see his harness touch the 11,000-volt cables, the Gloucester inquest was told.

She saw sparks fly from his harness, followed by a large bang and a cloud of smoke.

A short time later police told her that he was dead, she stated at the hearing at Gloucester Coroner’s Court. 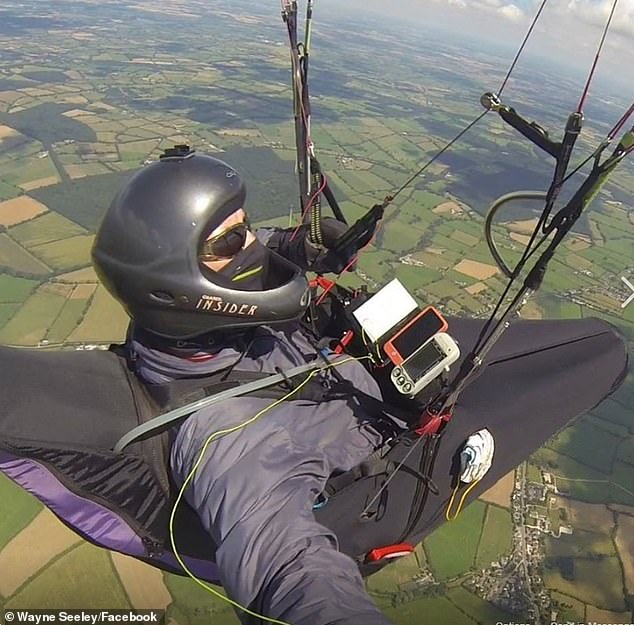 Top paraglider Wayne Seeley, 41, was killed when he crashed into overhead power cables shortly after ringing his fiancée from the air and asking her to come outside and watch him land near their home, an inquest heard

‘This was a freak accident. It doesn’t feel real,’ she said.

More than a hundred homes were left without power as a result of the incident, the court heard.

In a tribute to Mr Seeley soon after his death, Ms Bishop said ‘Wayne was loved by so many.

‘I never knew what true love was till I met Wayne – he was my fiancé, best friend, soulmate, protector and strength, who helped me through some tough times and pieced me back together.

‘Words don’t do him justice, he was so kind, caring, passionate, patient and funny.

‘We were so happy and were planning to marry this year and start a family. I’m just devastated, I will miss him so much. Till we meet again, my love.’

Pathologist Dr Matthew Beesley told the inquest he found Mr Seeley’s death to be ‘consistent with that of electrocution.’

There was no evidence of drugs or alcohol that would have affected Mr Seeley’s competence – however, he had taken paracetamol prior to his death, the pathologist stated.

The inquest heard that Mr Seeley had been paragliding for 25 years, having started at the age of 16. He normally flew from Selsley Common, Stroud, in the company of others.

He had obtained his British Hang Gliding and Paragliding Association certification in 1996 and belonged to the Avon Paragliding Club. 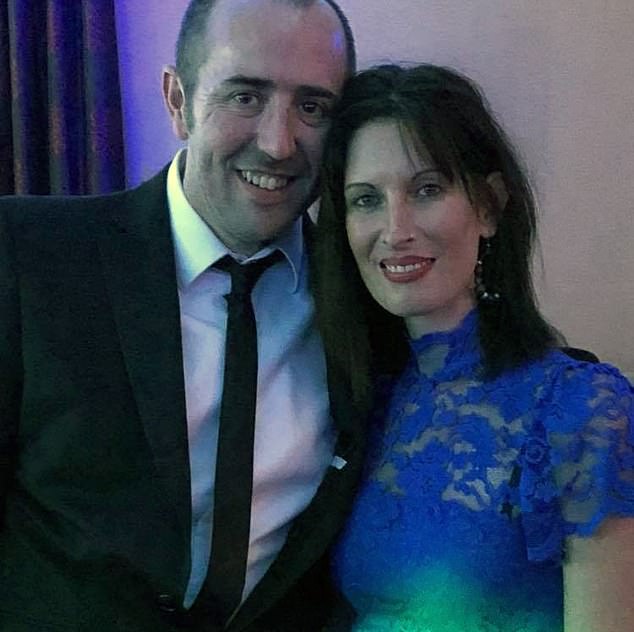 Leanna Bishop went into the garden of her home and looked up as Mr Seeley, 41, descended towards the local school playing field in Eastington, near Stonehouse, Gloucestershire, in June 2020

He was active in the National cross-country Paragliding League and was rated one of the country’s top ten pilots for the previous three years.

Mr Seeley had completed a 117km cross country flight on March 16, the inquest was told.

As one of the country’s top fliers he was known throughout the paragliding community.

He had flown over the Swiss Alps and all over the UK. He often took photographs while flying and was well known for some of the stunning images he had captured.

The inquest heard that Mr Seeley had landed in the school field at Eastington on three or four previous occasions.

His fiancée stated that she had been in constant communication with him as he flew on the day of his death.

He had texted her at 12.09pm and stated he was on Selsley Hill and was about to fly, she said.

At 12.59pm he rang, while flying, to say he was going to land in the field near to their house at Eastington. He told her to go out and watch.

The inquest was told that Ms Bishop watched from her garden and saw him coming in to land as normal, and everything seemed fine. 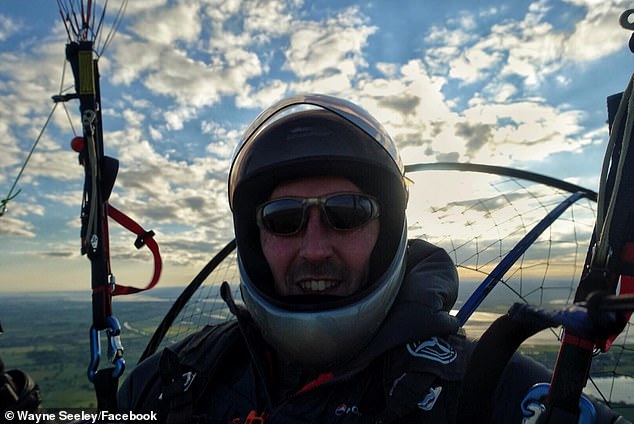 But she was then horrified to see his harness touch the high voltage cables. She saw sparks fly from his harness, followed by a large bang and a cloud of smoke. A short time later police told her that he was dead, she stated at the hearing at Gloucester Coroner’s Court. Above : One of the photos posted to social media by Mr Seeley

But as he came in to land, she saw Mr Seeley’s harness skim the power line over the field.

She saw sparks coming from the harness which was followed by a large bang and smoke.

A male friend who was watching with Ms Bishop immediately ran over towards Mr Seeley while others called the emergency services.

Ms Bishop could see that Mr Seeley had become unresponsive.

A short time later a police officer informed her that Mr Seeley had passed away despite the efforts of the paramedics.

In a statement Mark Shaw, a technical officer for the British Hang Gliding and Paragliding Association, said: ‘Mr Seeley was making a cross country paragliding flight from Selsley Common.

‘As he crossed the trees on the north-eastern boundary of his chosen landing site, the base of his harness was seen to strike high voltage electricity cables, causing massive sparks and a large bang.

‘He immediately fell vertically towards the ground and was attended to by witnesses and the emergency services. However he died from his injuries.

‘A witness reported that Mr Seeley had previously stated that he was fully aware of the high voltage power cables crossing the field and stated that it needed perfect conditions in order to land safely.’

A formal investigation was carried out into the accident which determined that the flying equipment was airworthy and was not considered to be a contributing factor to Mr Seeley’s death.

The report concluded: ‘The incident occurred because the pilot struck high voltage power cables on his approach to land.

‘He did not take effective avoiding action to prevent the collision, in which he sustained fatal injuries.’

Assistant coroner Roland Wooderson offered his condolences to Mr Seeley’s family. He was asked by them if he thought Mr Seeley had died instantly.

He replied: ‘It’s not stated anywhere in any of the reports, but in all probability he died instantly given the voltage of the power cables. In terms of medical evidence he died from the effects of electrocution.

‘The dramatic effects of the collision, the large bang, had been heard across the village.’

The coroner recorded a verdict of accidental death.