Parent at $57,000 a year NYC school that fired teacher for speaking out about woke lessons claims pupils spend one week every month devoted to Critical Race Theory

A former parent at the $57,000-a-year New York City school that fired a math teacher who spoke out against its woke curriculum has claimed pupils spend a week every month learning Critical Race Theory.

Grace Church School teacher Paul Rossi was ousted from the classroom Monday after he accused the school of ‘indoctrinating’ students with antiracist lessons ‘at the cost of students’ psychological and intellectual development’.

In an essay shared on former New York Times editor Bari Weiss’s Substack, Rossi said he could no longer stay silent while ‘witnessing the harmful impact’ that the curriculum has on children.

A former parent of the school, who identified himself as C Bell, commented on his essay that students are being forced to undertake controversial lessons focused on ‘antiracism, equity and belonging’.

He said: ‘I’m a former parent. My son had Paul Rossi. Sadly, Mr. Rossi’s account is not hyperbole.

‘One week out of the month is now fully devoted to CRT (not academics).

‘Grace was in the news earlier this year as well for it’s language guide, which suggested (among other things) that students and teachers say folks or parents or family and not specifically mom and dad because not all kids have mom and dads and such a person might be offended if you ask about their mom and dad.

‘The goal of education cannot be to eliminate all possibility of offense.’ 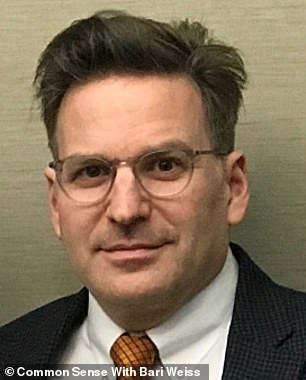 George P. Davison (right) the head of the Grace Church High School in Manhattan, sent a letter to parents and staff saying he was ‘disappointed’ math teacher Paul Rossi (left) had publicly blasted the private school in a blog post

Before the Rossi scandal, it was revealed last month that the Grace Church School issued a glossary of terms they claim will make the facility a more ‘inclusive’ place.

It offered a 12-page guide to staff, students and parents that encourages them to stop using ‘mom’ and ‘dad’, to stop asking classmates where they may have gone on vacation and urges them not to wish anyone a ‘Merry Christmas’ – or even a ‘Happy Holidays’.

The school’s website also has a page devoted to antiracism where it outlines the programs offered to pupils and parents.

Among the upcoming events are Zoom meetings for parents of white backgrounds where they can discuss how to better tackle racism.

Rossi claimed that the school’s headmaster, George P. Davison, privately agreed the school is ‘demonizing white people for being born’. That accusation came Monday in response to a letter by Davison said to have been shared with staff Sunday.

That note from Davison is said to have read: ‘You should know that Paul has declined his contract so will not be returning in the fall.

‘The wellbeing of our community is our first priority, and we take it seriously whenever students raise concerns about the professionalism of a teacher. 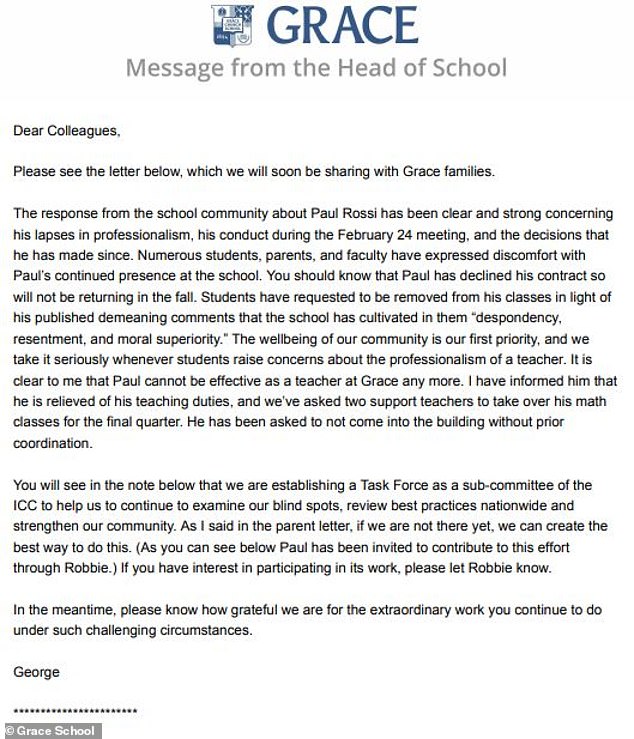 Topher Nichols, the school spokesman, confirmed to DailyMail.com Monday: ‘I can confirm that Paul was relieved of his teaching duties’

‘It is clear to me that Paul cannot be effective as a teacher at Grace any more. I have informed him that he is relieved of his teaching duties, and we’ve asked two support teachers to take over his math classes for the final quarter.

‘He has been asked to not come into the building without prior coordination.’

Topher Nichols, the school spokesman, told DailyMail.com Monday: ‘I can confirm that Paul was relieved of his teaching duties.

‘He has been invited to spend the remainder of his contract with the school contributing to a new task force that will review best practices nationwide around belonging.’

She was joined on Fox News by Turning Point founder Charlie Kirk, who added: ‘Where are the adults that are going to start to stand up and realize that the next generation that’s standing up for freedom in our country is worthy of protection, in this situation?

‘It takes courage to be a young conservative. It’s time for adults to start to protect young people’s right to organize and speak their mind.’

Owens added: ‘This thought process that we keep seeing that conservatives are not allowed to exist, that being conservative is backwards and it’s wrong, and especially when it comes to the education system taking part in this, right?

‘Smearing and labeling their own students, these students having to transfer out of schools. This is systematic bullying that’s happening, but worse than that, it’s propagandist.’

She later praised Andrew Gutmann, 45, who pulled his daughter from $54,000 a year Brearley school  as ‘an absolute hero’ before blasting ‘meaningless’ degrees like gender studies.

Responding to one student’s claims that they were punished for studying her in black history month, Owens said: ‘This young girl you brought up…picked me, a black person, for Black History Month, and she was accused of being a racist.

‘I mean, that is so twisted and perverted and wrong. It would be funny if it wasn’t so cruel that led to her actually having to transfer out of this school.’

Nichols elaborated on why Rossi was ‘relieved of his teaching duties,’ saying it was because ‘numerous students requested to be removed from his class because of his unprofessional conduct and because he demeaned them in the press.’

The school had told DailyMail.com Thursday that Rossi wouldn’t be fired or face discipline over his post.

Rossi then said he received an email from school Principal Davison saying he should stay home until further notice for ‘security concerns.’

He is said to have been asked to stay home after another colleague threatened him in the wake of his complaints being published.

By Monday he had been ‘relieved of his duties’.

Conservative activist Charlie Kirk added: ‘Where are the adults that are going to start to stand up and realize that the next generation that’s standing up for freedom in our country is worthy of protection, in this situation?

‘It takes courage to be a young conservative. It’s time for adults to start to protect young people’s right to organize and speak their mind.’

Her comments came in the wake of a second controversy that impacted another elite New York City prep schools where a parent complained his child was being brainwashed with anti-racism ideology.

Andrew Gutmann, 45, had announced in an April 13 letter shared by journalist Bari Weiss this week that he has chosen not to reenroll his daughter in the all-girls school where annual tuition is $54,000.

He pulled his daughter from the school over its woke antiracism ‘obsession.’ He accused the school of ‘teaching what to think not how to think.’

The school responded by slamming him for being ‘offensive.’

On Monday Woke, Inc author Vivek Ramaswamy also blasted what he calls a culture of ‘indoctrination’.

He said American schools are ‘going down the tubes’ because they have been ‘infected’ with ‘woke culture’ that has ‘sacrificed the idea of excellence’ by ‘indoctrinating’ students.

Ramaswamy, a biotech entrepreneur and the author of Woke, Inc, compared the wave of ‘wokeness’ in schools to China’s Cultural Revolution of the 60s and 70s, when its people were indoctrinated with Maoism by the Communist Party.

Ramaswamy told Fox News that these incidents illustrate the extent to which American children are being brainwashed.

‘I think it’s going to be really damaging, poisoning the minds of our next generation,’ he told Fox News.

‘The thing about America as a country is that we are not like many other countries throughout history – defined on the basis of a single ethnicity, or a single language, or a single monarch.

‘America is an idea, and part of being an idea as a country means this.

‘The way we describe America affects that America actually works, that’s why we call it the American dream.

‘It’s what we aspire to. E pluribus unum (out of many, one). That’s what we should be aspiring to, ideas that bind us together. 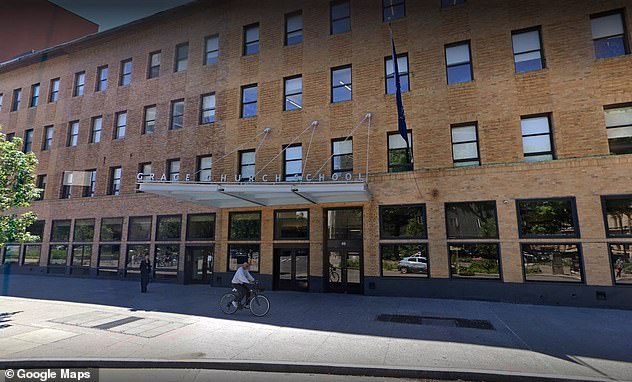 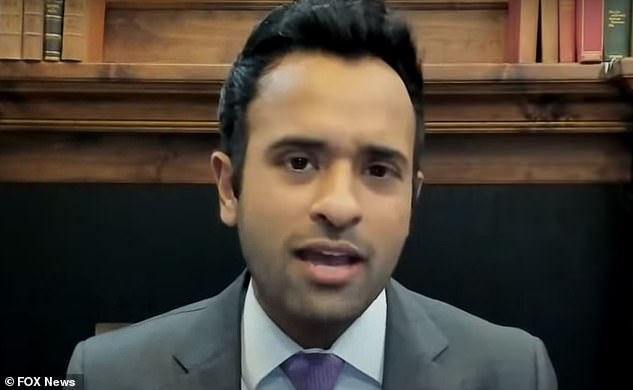 HEAD OF DALTON RESIGNS AMID ROW OVER WOKE POLICIES

Jim Best said he would see out the year at the $50,000-a-year institution then step down to pursue ‘other opportunities’

The head of the elite Manhattan school Dalton is stepping down this year after being slammed by parents for pushing an ‘obsessive’, antiracism agenda on students.

Jim Best said he would see out the year at the $50,000-a-year institution then step down to pursue ‘other opportunities’.

His resignation is in response to parents’ complaints that Dalton, like other prestigious private schools Grace Church and Brearley, is indoctrinating students with its woke agenda.

Dalton parents penned an anonymous open letter to the school earlier this week.

‘Every class this year has had an obsessive focus on race and identity, ‘racist cop’ reenactments in science, ‘de-centering whiteness’ in art class, learning about white supremacy and sexuality in health class.

‘Wildly inappropriate, many of these classes feel more akin to a Zoom corporate sensitivity-training than to Dalton’s intellectually engaging curriculum,’ it read.

He added: ‘Instead we have been obsessing over diversity, our differences, for a decade now forgetting all of the ways in which we are actually the same, and now that’s getting transmitted to the next generation.

‘I think the way we describe this country to them will affect the way it works in the next generation, and that’s something to be really frightened of.’

Gutmann, who runs his family’s chemical business, told the New York Post on Saturday that he penned the 1,700-word letter he mailed to 650 different families because ‘someone had to speak out.’ He said he does not regret sending the letter.

‘She hasn’t been brainwashed yet by the school – but she’s had me at home. I’m not so sure that’s true of the other kids,’ Gutmann told the outlet, referring to his daughter.

Gutmann said he refused to sign the school’s anti-racism pledge in October.

The school had started the required pledge after black alumnae accused the school of racism in posts made to the Instagram account account ‘Black at Brearley,’ according to the Washington Free Beacon.

The school’s antiracism and diversity plans are extensively described on its website.

‘I thought they were going to kick my daughter out then,’ Gutmann said.

‘They didn’t, but next year they have the pledge built into the yearly school contract.’

The concerned dad claimed that the school’s ‘once-rigorous curriculum’ completely changed after administrators ‘managed to sneak’  in an increased emphasis on race during the pandemic ‘when everyone was distracted,’ the New York Post reported.

‘I don’t know who’s really driving this and nobody does,’ he told the outlet.

Gutmann said the thing he resented the most about Brearley is that the school ‘has begun to teach what to think, instead of how to think.’

Jane Fried, Brearley’s head of school, sent a message to the school’s families on Friday in which she slammed Gutmann’s letter as ‘deeply offensive and harmful.’