Bees-y Jet: Two passenger planes are grounded hours apart in India after a massive swarm of BEES land on the aircraft

A swarm of bees caused chaos at Kolkata airport in India this week after settling on two jets – delaying both flights.

The bees first appeared on a Vistara plane on Sunday as it waited in a hangar before boarding, then reappeared the following morning on another jet in the same hanger.

On both occasions a fire truck had to be brought to spray down the jets and remove the bees, delaying each flight by around an hour. 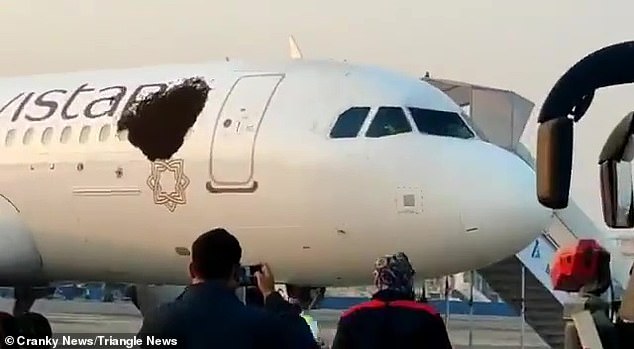 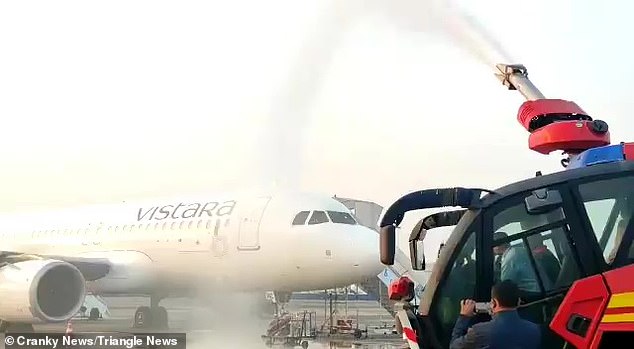 A fire truck had to be brought out to dislodge the bees before boarding could go ahead, meaning the flight took off around 6.30pm instead of 5.30pm

An airline spokesman told the Times of India the bees first appeared around 4pm on November 29, swarming on the side of a Visrata plane bound for Delhi.

Boarding had to be delayed while a fire truck was brought out to hose down the aircraft, which was filmed by a member of the flight crew.

The flight, which was due to depart around 5.30pm, eventually ended up departing around 6.30pm.

But if airline staff were hoping the incident was a one-off, they were in for a surprise the next morning when the bees reappeared on another aircraft in the same hangar.

This time, the insects had swarmed on a flight that was due to depart for Port Blair airport around 10.30am.

The swarm stopped baggage handlers from loading luggage on to the plane, as it settled just above the open cargo doors.

Again, a fire hose had to be brought out to clear the insects. Loading eventually resumed, and the flight took off around 11.30am.

It is not clear exactly why the bees swarmed the aircraft, but swarms of honeybees typically swarm when they are moving nests. 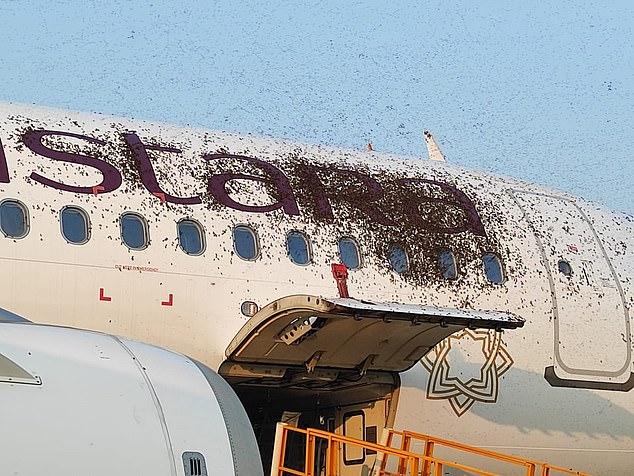 The bees returned on Monday morning, swarming around a second aircraft in the same hangar, again delaying the flight by around an hour

Bees may move for two reasons: Either the original nest becomes nonviable due to disease, pests, or other environmental changes; or the colony outgrows the nest, in which case it will split in two with half the bees heading off to find a new home.

In either case, the worker bees will starve the queen down to the point where she is light enough to fly then accompany her to the new nesting site, according to information published by the University of California.

While swarming, bees may initially move to a resting site that is just a short distance from the original nest, while sending out scouts to find a new permanent home.

The temporary site may only be used for a few hours, or the bees may remain there for several days while the scouts explore.

Due to declining bee populations, particularly in the US and Europe, beekeepers urge people not to attack or spray the insects if they swarm houses, cars, or – in this case – jumbo jets.

Instead, people are asked to call professionals who can manually relocate the hive to a safer spot.