The two-time Wimbledon champion tweeted that her “whereabouts (are) currently unknown after making sexual abuse allegations against (a) Chinese government official”.

Murray also linked to a video of Czech player Barbora Krejcikova speaking about her country’s liberation from communism during the Velvet Revolution of 1989.

Martina Navratilova, standing behind Krejcikova, is in tears. Navratilova defected from communist Czechoslovakia early in her career, becoming a US citizen in 1981. The revolution ended communist rule in the country and in 1993, the nation was dissolved, becoming the independent states of the Czech Republic and Slovakia.

Murray said of the footage: “This speech gives us a reminder and some hope that things can change in the future. #WhereIsPengShuai.”

Other stars including Serena Williams, Naomi Osaka and Novak Djokovic are among those concerned over her whereabouts.

China’s foreign ministry claimed on Friday that it was unaware of the controversy.

Ministry spokesperson Zhao Lijian told reporters it was “not a diplomatic question and I’m not aware of the situation”.

Peng, 35, a former Wimbledon doubles champion, wrote a social media post on 2 November accusing a former top government official of forcing her to have sex after playing tennis at his home.

Her original post on Weibo has been taken down. 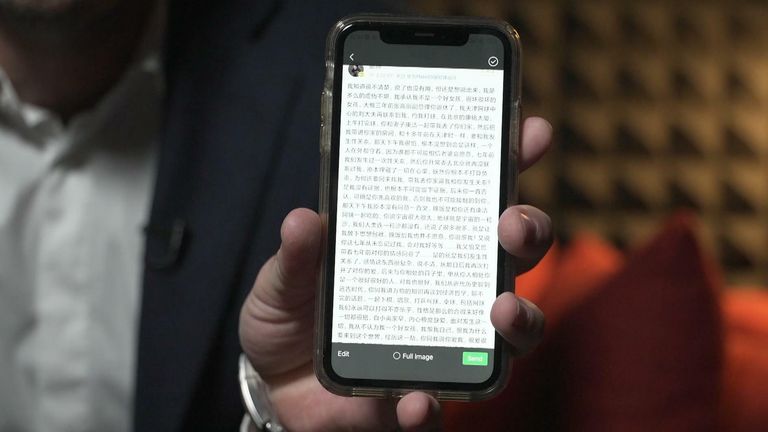 An email said to be from Peng was released on Wednesday by CGTN, the international arm of government-controlled state broadcaster CCTV, but doubts have been raised over its authenticity.

It says the sexual assault claim “is not true” and adds: “I’m not missing, nor am I unsafe. I’ve just been resting at home and everything is fine”.

Steve Simon, the head of the Women’s Tennis Association (WTA) said it “only raises my concerns as to her safety and whereabouts”.

“I have a hard time believing that Peng Shuai actually wrote the email we received or believes what is being attributed to her,” he said in a statement.

“Peng Shuai displayed incredible courage in describing an allegation of sexual assault against a former top official in the Chinese government.

“The WTA and the rest of the world need independent and verifiable proof that she is safe. I have repeatedly tried to reach her via numerous forms of communication, to no avail.”

Mr Simon said Peng’s sexual assault claim must be investigated with “full transparency” and she should be allowed to speak “without coercion or intimidation”.

Speaking to NBC News, he also raised the prospect of rethinking WTA events in China if things are not resolved satisfactorily.

The country has a “track record of forcing statements out of individuals under duress, or else simply fabricating them”, said its China researcher Doriane Lau.