Lima: The little-known head of Peru's congress has taken the helm of the South American nation amid a public outcry over the surprise impeachment of the country's popular and now former president, Martin Vizcarra.

Vizcarra's ouster late on Monday, Lima time, and the inauguration of now-interim President Manuel Merino amounted to a return of the political chaos that has long plagued the country, where nearly every president since 1990 has either resigned, been indicted or jailed — and in one case, suicided — amid clouds of corruption. 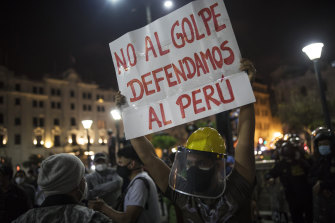 A protester holds a banner that reads in Spanish: “No to the coup, let’s defend Peru,” in favour of President Martin Vizcarra in Plaza San Martin in Lima.Credit:AP

Yet at a time when the Andean nation is confronting one of the world's most lethal coronavirus outbreaks, Vizcarra’s impeachment, based on still unproven bribery allegations, appeared to be fundamentally different. Critics called it a congressional coup staged by Machiavellian legislators desperate to halt his anti-corruption and political reform campaigns, which took aim at their pocketbooks and threatened to end many of their political careers.

Under Vizcarra, Peru adopted laws that took on festering malfeasance within the 130-member legislature, where 68 members are now under investigation or indictment for crimes ranging from money laundering to murder. Members of the current congress have been prohibited from seeking reelection, and anyone with active charges is barred from running.

Critics now fear that Merino — who previously sought to turn the military against Vizcarra, and attempted an earlier impeachment on different grounds in September — will seek to lift those rules, allowing a compromised political class to preserve itself and setting up a new period of instability in this nation of 32 million. He will be in office until July 2021, according to Reuters.

Elections are scheduled for April and Merino vowed to maintain that timetable. 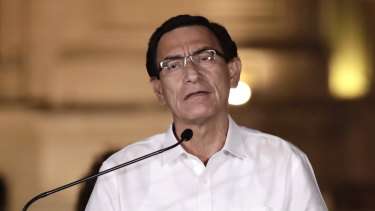 Martin Vizcarra, Peru’s ousted president, speaks during a news conference at the Government Palace in Lima.Credit:Bloomberg

Small pro-Vizcarra demonstrations broke out in front of Congress on Tuesday as sectors from local mayors to the Catholic Church assailed the country's tainted legislators for ousting the president.

"Getting control of the executive branch and stopping corruption investigations is critical to their personal survival," said Jo-Marie Burt, a political scientist at George Mason University who follows Peru. "They have common purpose. This is not ideological. It's a coalition of the corrupt."

A US State Department official said US officials were "following events closely".

"We look to Peruvian institutions to uphold the constitution and the rule of law," the spokesperson said in a statement. "We note that national elections are scheduled for April. As a region of democracy and prosperity, we call on Peruvians to continue to pursue their political ends via a peaceful, lawful, democratic process."

Legislators voted 105 -19 on Monday evening to remove Vizcarra over uncorroborated allegations he had taken a bribe of 2.3 million sols – roughly $890,000 – while governor of the southern region of Moquegua from 2011 to 2014. 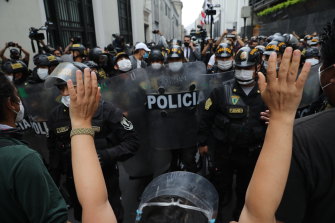 "There is nothing to celebrate here; this is a difficult moment for the country," Merino, 59, said in a speech after being sworn in. "Our first commitment before the country is to confirm our democratic convictions, and our respect for the election timetable."

Legal analysts warned that Vizcarra's sacking, on the vague grounds of "moral incapacity", appeared to violate the constitution, which allows a president to be removed from office only for infirmity, not alleged misconduct.

Nevertheless, Vizcarra, a former vice-president who stepped into the nation's top job in 2018 when then-president Pedro Pablo Kuczynski resigned to avoid his own impeachment proceedings for allegedly receiving bribes, said he would not challenge the decision.

"I am leaving the palace as I entered it two years and eight months ago, with my head held high," he told reporters late Monday in Lima. 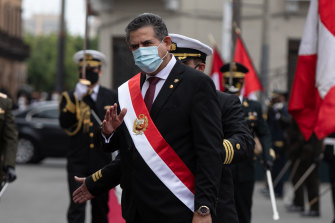 Manuel Merino, Peru’s interim president, arrives for a swearing in ceremony in Lima, on Tuesday.Credit:Bloomberg

Vizcarra has denied the allegations and said repeatedly he would cooperate with prosecutors once he left office in April and lost special immunity from prosecution as head of state. Polls showed more than 70 per cent of Peruvians opposed his impeachment, even as voters took the charges against him seriously.

Many now wonder how far Merino and his new ministers will go to reverse Vizcarra's reforms and implement populist policies that have been pushed by congress but were blocked by Vizcarra because of their potential to destabilise the economy. They include allowing workers to dip into their private pension funds, a move that could break the system, and the legalisation of many of the rickety minibuses that pass for public transport.

The impeachment was spearheaded by Edgar Alarcón, a member of the small, nativist Union for Peru party led by Antauro Humala, the jailed brother of former center-left president Ollanta Humala.

Antauro Humala is serving a prison term for leading a military uprising in 2005 in which several police officers were killed. He regularly generates headlines with his plans to run for president upon his release and his outrageous statements, including calling on his brother to commit suicide.

Alarcón is himself facing criminal prosecution once his parliamentary immunity expires for alleged embezzlement and illicit enrichment during a previous stint as comptroller general.

The impeachment of Vizcarra succeeded thanks in large part to the votes of two parties whose leaders both own private universities that are being targeted by regulators as part of a major education reform.

Jose Luna Galvez, founder of Podemos — "We can" — was arrested on Saturday for allegedly bribing election officials into allowing the party to register without verifying the thousands of voters' signatures required. He owns Telesup, a large university that regulators are shutting down.

The party's presidential candidate for the April election is Daniel Urresti, a brash former interior minister facing a retrial next month for his alleged involvement in the 1988 murder of Peruvian journalist Hugo Bustios.

The impeachment debate was notable, observers said, for its lack of focus on Vizcarra's alleged wrongdoing. Instead, members railed in general terms against Peru's lack of "values", its high COVID-19 death toll and its long history of corruption.

"They spoke about everything except how Vizcarra's behaviour constitutes moral incapacity," said Fernando Tuesta, a political scientist at the Pontifical Catholic University of Peru. "Mr Merino was desperate to get into the gallery of presidents. It's sheer personal vanity."

The accusations against Vizcarra were first reported by local media. They originated with several business executives who are themselves being investigated for corruption and have been seeking to strike plea deals with prosecutors.

Those facing the immediate consequences of the impeachment were the Peruvian people.

"These members of congress are desperate," said Beto Vizarreta, 39, a construction contractor who protested the impeachment on Monday. "It was impeach Vizcarra or jail. What happens next is now it is up to us, the Peruvian people."