Get your snout out! Pet pig is caught on camera opening kitchen fridge to steal a bunch of grapes

This is the comical moment a mischievous pig is caught opening a fridge door as he raids it for snacks.

Kaitlyn Frazier, 29, from Illinois, was making breakfast when she saw her pet Albert Einswine, who she adopted in May 2018, helping himself to grapes from the chiller.

The startled optician closed the fridge door and decided to see if she could catch the pig raiding it again on camera. 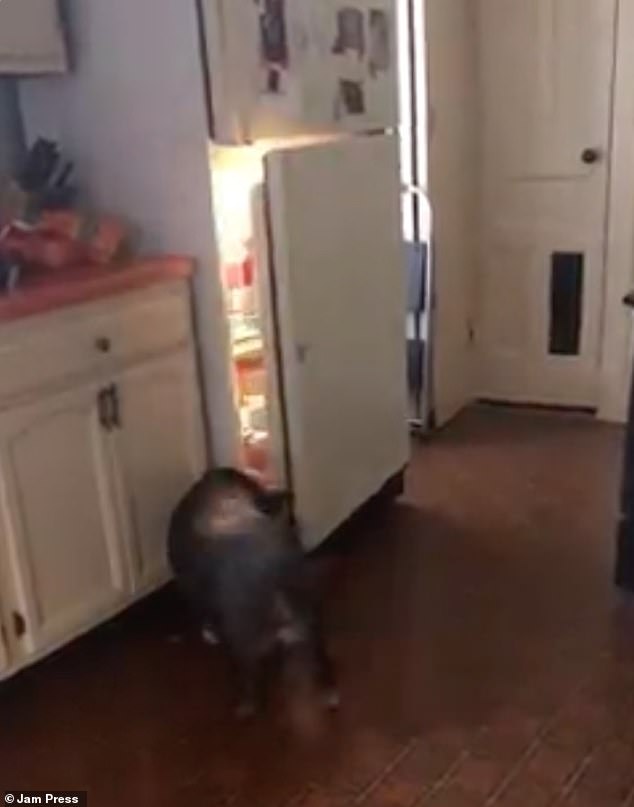 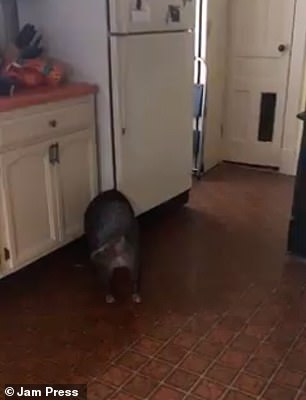 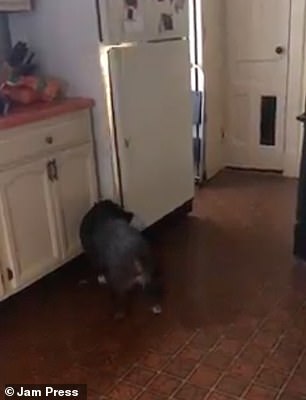 The pig, who Ms Frazier adopted in May 2018, manages to open the fridge door using his snout

During the clip Ms Frazier says: ‘Somebody learned how to open a fridge today.

‘Let’s see if he does this again. Not that I’m happy about this mind you.’

The animal walks over to the fridge and uses his snout to open the door, as Ms Frazier exclaims: ‘Oh my gosh he did!’

The pet’s owner said Albert loves watermelon, strawberries and peanut butter, but will eat just about anything – and will always find a way to get his treat.

She said: ‘I normally give Albert snacks right out of the fridge so he watches me all the time.

‘It never occurred to me that he would open the fridge until I was making breakfast and heard the door open.

‘I thought it was my fiancé and was very surprised when I turned around and it was Albert helping himself to some grapes.

‘So, I closed it and got out my phone because who seriously would believe a pig could do that. I figured it was a fluke.

‘After I got him on video, it’s like it completely clicked how to open the fridge for him. He tries to all the time now.

‘I had to go buy a baby lock that day because he would just constantly go to the fridge and open it.’

She continued: ‘Albert loves to open any cupboard that’s not baby locked because he’s a stinker. 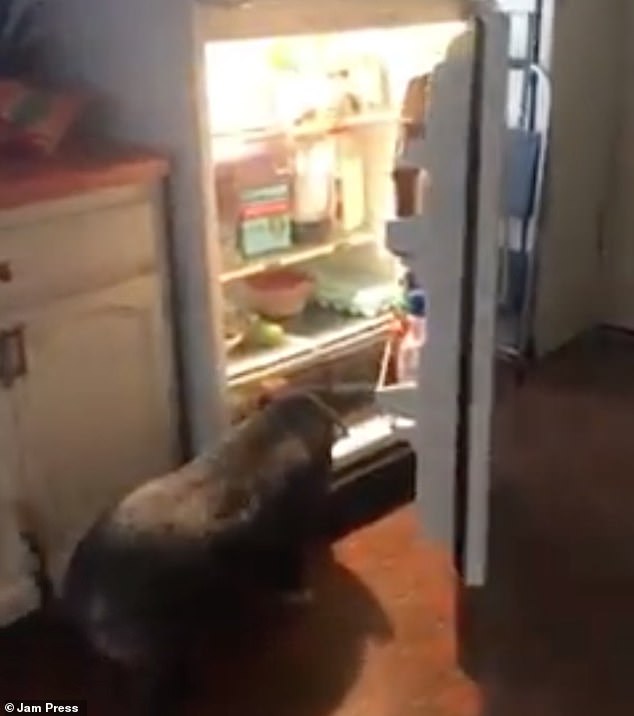 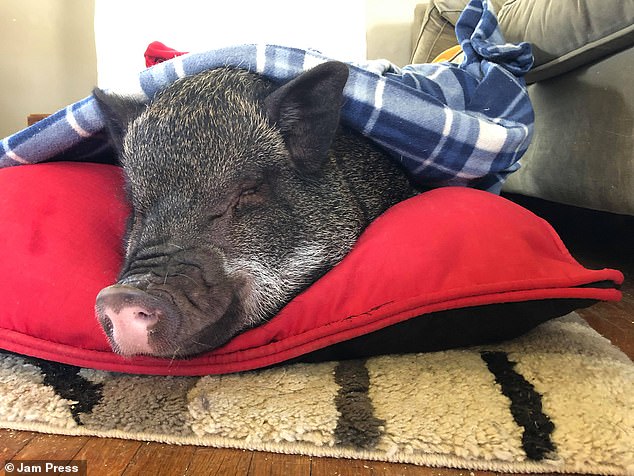 Ms Frazier said Albert loves watermelon, strawberries and peanut butter, but will eat just about anything 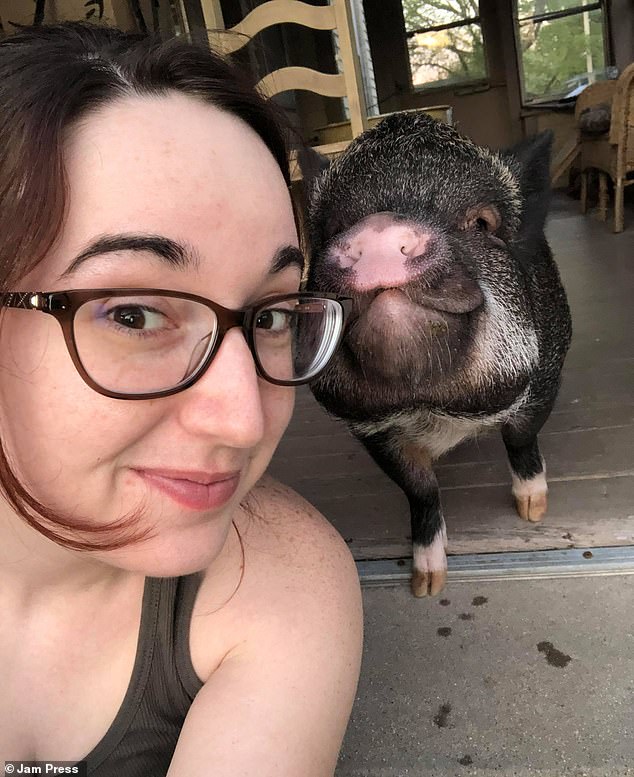 ‘Sometimes I forget to lock the ones where we store our paper towels and he loves to run off with those and shred them when I’m not looking.

‘Albert also loves sunbathing and has a favourite chair that he lays in.

‘I take a picture every year to compare how big he’s gotten. He’s actually outgrown his chair now so it can’t fold but that doesn’t stop him from laying in it.’

The optician went on to describe how Albert never fails to wake her up in the morning with a loud snort to let her know it is time for breakfast.

Ms Frazier said: ‘A typical day in the life of Albert includes breakfast at 8am. He will loudly let me know if I’ve overslept and missed that.

‘Then I’m off to work so he stays in his own room where he has a rooting mat, a toy piano, stuffed animals and other toys to keep himself entertained until I get home. 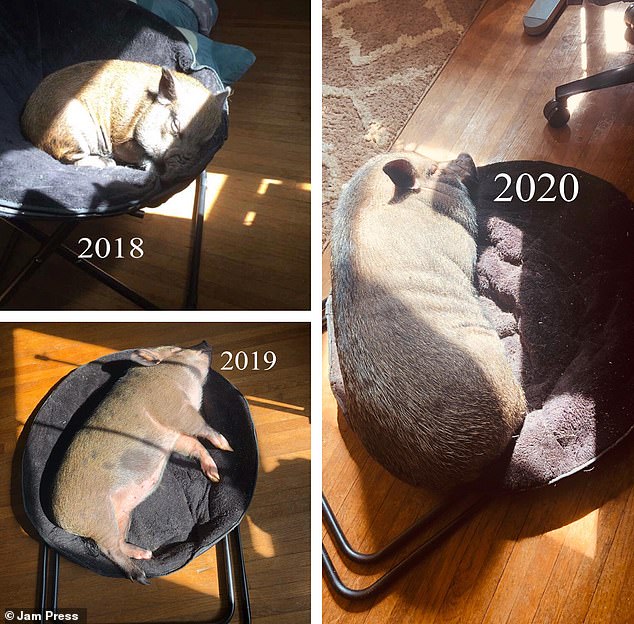 ‘He has free roam of the house when I get home but he’s usually glued to my side.

‘He usually puts himself to bed around 10pm after a little late night snack and sleeps through the night.’

Despite his mischievous behaviour, the optician said she loved her pet pig for his joyful and energetic personality.

She added: ‘I feel like he’s always getting himself into trouble somewhere but I absolutely love him.

‘We moved a few months ago and bought a house with a big backyard for him to run around in so I’m looking forward to spring and seeing what adventures he will get into next.’