Pfizer warns EU to back down on its threat to block vaccine exports: Pharmaceutical giant’s key ingredients are manufactured in UK and its production in Europe could halt if tit-for-tat row stops exports from Britain

Pfizer has urged the EU to back down on its threat to block vaccine exports to the UK, claiming Britain could hit back by impounding crucial UK-manufactured ingredients for vaccines produced in Europe.

European Commission president Ursula von der Leyen issued the warning this week amid the shambolic distribution of jabs on the continent.

She threatened to block exports of vaccines to Britain while complaining that the EU was ‘still waiting’ for Astazeneca doses to be delivered from the UK, where the vaccine drive is far outpacing efforts on the continent.

It comes amid criticism of European leaders for suspending the Astrazeneca jab over blood clot fears despite there being no evidence that the injection increases the risk.

Both European and British  regulators have insisted the vaccine is safe and that the tiny handful of clotting cases – out of millions of jab recipients – is not linked to the injections.

It is thought there are currently 7.5million doses of AstraZeneca vaccine sitting un-used in Europe as a result of the bans.

However, von der Leyen’s threat has sparked a response from pharmaceutical giant Pfizer and partner BioNTech.

The firms have told Brussels of the potential power held by the UK, which could see officials preventing raw materials needed for the jab being shipped from northern England if the row continues. 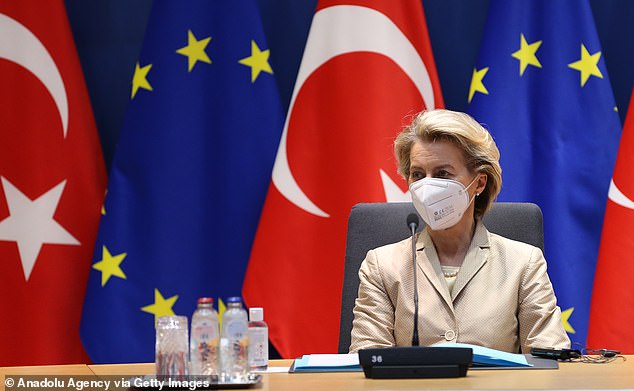 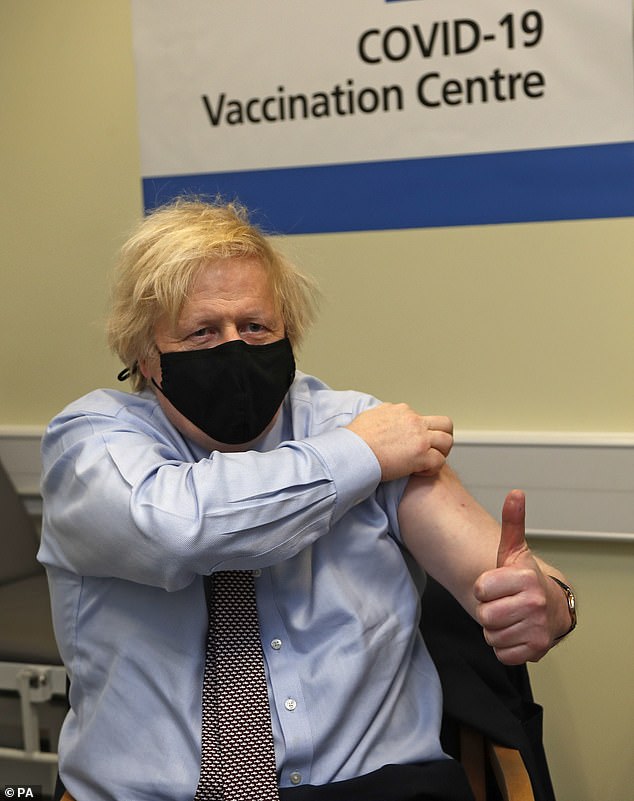 A chemicals firm in the small town of Snaith, North Yorkshire, signed a five-year contract with the EU before Christmas and has since delivered ‘fatty molecules’ to Pfizer factories in the bloc, according to the Telegraph.

If Boris Johnson and his top team move to stop deliveries flowing across the Channel, it could see production at its main site in Belgium halted completely within weeks.

A senior Government source distanced themselves from the suggestion, but Pfizer and BioNTech are believed to have issued a private warning over the ramifications if Downing Street is provoked further.

Lipid nanoparticles – specialised fatty molecules used to encase the vaccine and make sure it is safely administered to human cells – are in short supply globally, and the drugmaker is said to be ‘heavily dependent’ on supplies from the UK.

Croda International is one of only a handful of companies in the world which can supply the substance and has quadrupled its factory capacity to meet demand, which it predict will generate more than £90m in sales. 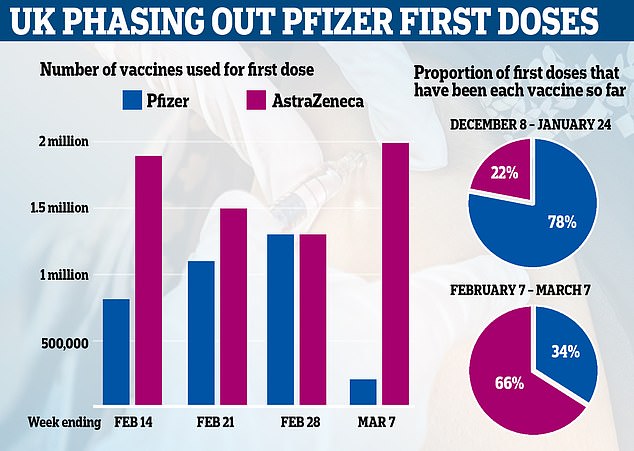 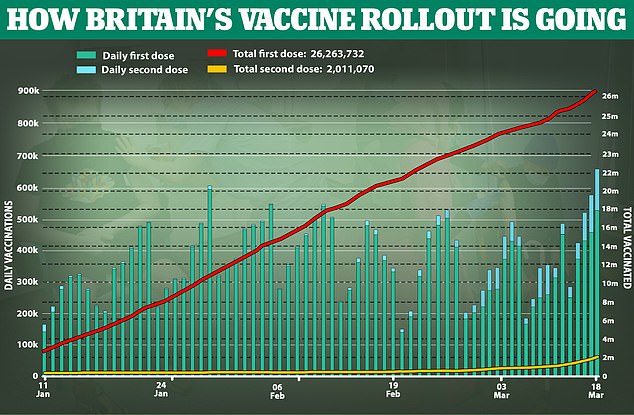 A Pfizer spokesman told the Telegraph: ‘We have been clear with all stakeholders that the free movement of goods and supply across borders is absolutely critical to Pfizer and the patients we serve.’

It comes as official data suggests Britain has almost stopped giving out the Pfizer Covid vaccine to new patients so it can save supplies for second doses.

The NHS appears to now be rationing the jab, which was used to kick off the rollout in December, and only used it for one in 10 new patients in the first week of March.

In January, when AstraZeneca’s vaccine was first approved, Pfizer’s still accounted for three quarters of all first doses but this fell to just nine per cent in the first week of March, when only 200,000 new patients were given it.

MailOnline understands deliveries of the Belgian-made jab will be smaller from April because of a planned reduction and the ongoing EU block threat.

Ministers must be careful with the supply they do get because they’re already over halfway through supplies planned up to June – and they owe around 10m people a second dose.

The Department of Health said everyone will get their second doses within 12 weeks as planned. Both the Department and Pfizer declined to comment on the delivery schedule but insist there is no problem with supplies, amid reports on social media of Britons being told there is a shortage.

AstraZeneca’s vaccine, which is available in much larger quantities, is now taking over as the country’s staple vaccine as medics rattle through the priority lists. 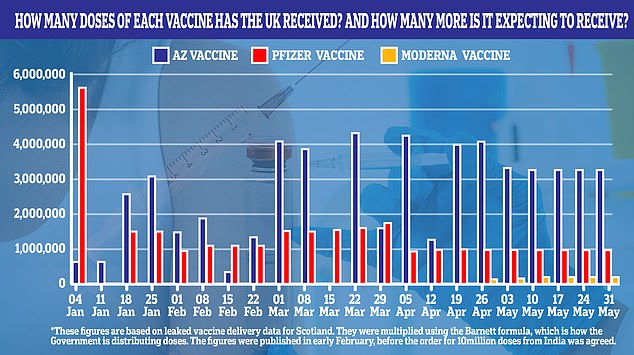 Supply figures for the vaccines were always expected to dip in April and May, according to projections published by the Scottish Government in January — before the UK had struck a deal for 10million doses from India. Therefore, the India delivery delay is believed to be separate from these figures

But a hiccup in supplies of that because of a blocked shipment of 5million doses from India – combined with a need to reserve Pfizer stocks – means the number of people getting first doses will be ‘significantly constrained’ in April, the NHS has warned.

This means millions of people in their 40s will likely have to wait until at least May to get their first doses. But Whitehall insiders are still hopeful that some will get jabs ahead of schedule, amid claims under-50s would be invited by Easter.

In response to the row earlier this week, Health Secretary Hancock telling a Downing Street press conference that ‘we fully expect’ vaccine contracts to be delivered on.

Meanwhile, Foreign Secretary Dominic Raab said that Ms von der Leyen’s comments flew in the face of ‘direct assurances’ that contracts will be honoured and Tory MPs accused her of ‘playing politics with people’s lives’.

HOW BADLY WOULD UK’S VACCINE DRIVE SUFFER IF THE EU BLOCKED VACCINE EXPORTS?

If the European Union blocked all exports of coronavirus vaccines made on its turf, Britain could remain self-sufficient and still get jabs to the entire population.

However, it could come under pressure on second dose supply.

EU president Ursula von der Leyen suggested this week that the bloc could start an export ban on vaccines – the second time that threat has been made – because the continent’s rollout is going so badly.

WHICH VACCINES ARE MADE IN THE EU?

The Pfizer/BioNTech jab is currently the only vaccine used in the UK but manufactured in the EU, at the company’s plant in Puurs, Belgium.

AstraZeneca’s jab is made at home in England and Wales.

Moderna’s – which will become available in about two weeks’ time at the start of April – is produced in Switzerland, which is not an EU member and so not under von der Leyen’s jurisdiction.

The Janssen vaccine, which has not yet been approved by Britain but is likely to be next, will be made in various factories around the world, including in France, Belgium, the US and Japan. Britain’s supply is likely to come from the EU but is not expected until the second half of this year in any case.

CAN WE RELY ON ASTRAZENECA?

The good news is that the UK has ordered so many doses of the Oxford/AstraZeneca jab – 100million – that in a worst-case scenario it could immunise the entire adult population (around 50million people) using that one alone.

And supply of the Oxford/AstraZeneca jab in April and May will be around three to four times larger than of Pfizer and over 20 times as large as those from Moderna – at around three to four million available per week, according to a delivery schedule leaked by the Scottish Government in January – meaning the country will be able to rely on those for the vast majority of its vaccinations.

WHAT ABOUT PFIZER SECOND DOSES?

The bad news is that around 13million people have already had at least one dose of the Pfizer/BioNTech vaccine, and the majority of them are still waiting for a second jab, which are likely only to come from within the EU.

This means that Britain has to have another 13million doses at least, in order to make sure those people are fully protected.

And it also hopes for another 14million so it can immunise the total 20million for whom doses were ordered.

Pfizer and the UK Government have both refused to comment on the supply chain but deliveries are expected to be smaller in April.

The Department of Health may have to stop using Pfizer supplies for first-time vaccinations within weeks if the spectre of export issues remains, MailOnline understands, because it must begin to stockpile supplies to cope with the huge demand for second doses that will come in April, three months after the rollout exploded in January.

The delivery projections accidentally published by the Scottish Government suggest its supplies of Pfizer will tumble from 130,000 per week throughout March to just 78,000 per week in April and May.

This could equate to approximately 1.5million per week for the whole UK dropping to 950,000 per week, according to the distribution formula used by the Government.

The UK vaccinated more than 2.5million people per week throughout most of January and February and around half of all doses used were Pfizer, meaning the demand for second doses could exceed one million per week in April and May.

If this is the case the Government will have to use all of the projected 950,000 per week suggested in the Scottish delivery schedule while also hoping it has enough left over to meet this rolling demand – leaving little to no capacity for people to receive the Pfizer jab for the first time.

Pfizer declined to comment on its supply chain but said: ‘In the UK, we are continuing to liaise closely with the Government to deliver the 40million doses of the Pfizer/BioNTech vaccine that we have committed to supply before the end of the year and can confirm that overall projected supply remains the same for quarter one (January to March).’