Police hunting two men over a gas bottles theft branded tip-offs they could be gipsies ‘offensive and unacceptable’ – then urged the travelling community to report the messages.

Kent Constabulary released an appeal for witnesses yesterday after a shop in Sutton Valence, near Maidstone was targeted on February 9.

Officers circulated a CCTV image of two men they said they wanted to speak to about the distraction theft just after 11.20am.

But the picture – which was shared on social media by the force – attracted a number of comments suggesting they could be from the travelling community.

They included posts which referenced the possibility it could have been stolen to power caravans.

Kent Police deleted as many as it could from its Facebook page but issued a warning on Twitter, telling users to think before positing.

It said: ‘We are aware of a number of offensive and unacceptable comments that have been left in response to this witness appeal. Please remember to post responsibly.’

By then the Travellers Against Racism group had been alerted and challenged them as to why more had not been done. 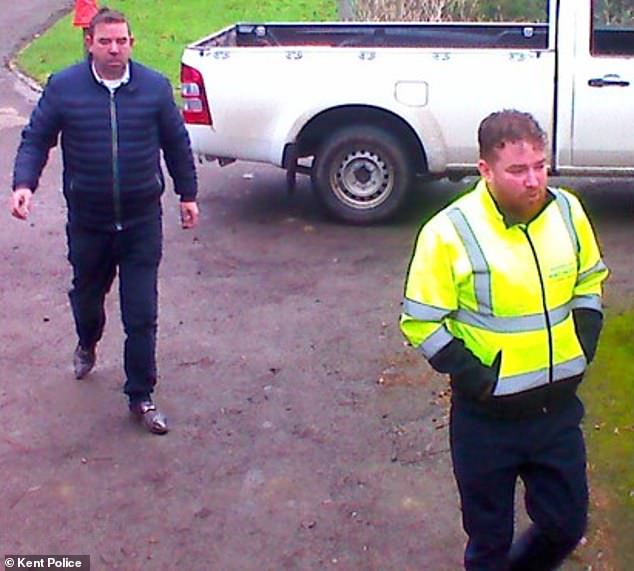 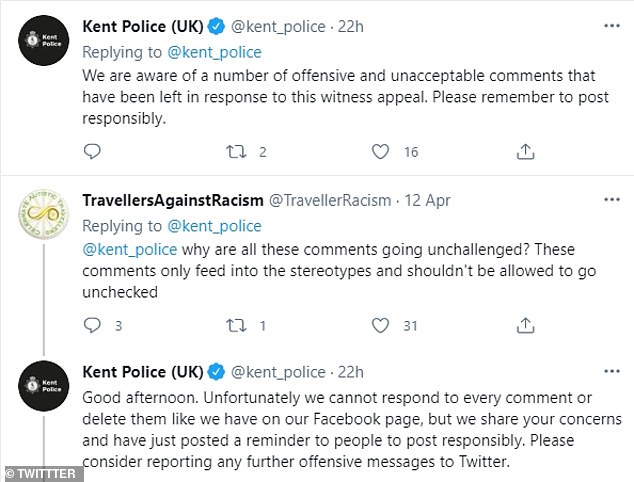 The picture sparked suggestions they could be gipsies, which were the branded ‘offensive’

Kent Police announced it was marking Gipsy Roma Traveller History Month in June and put out a picture of three members of staff with the colourful banner.

But the social media post prompted over a thousand responses, with most of them negative.

Kent has had to deal with a large number of illegal traveller sites in the past.

One web user accused the force of being ‘out of touch’, while others declared they should leave ‘left wing woke politics’ behind.

The Gipsy Roma Traveller Police Association – who represent those from the travelling community – said they had hundreds of officers and the flag recognised their contribution. 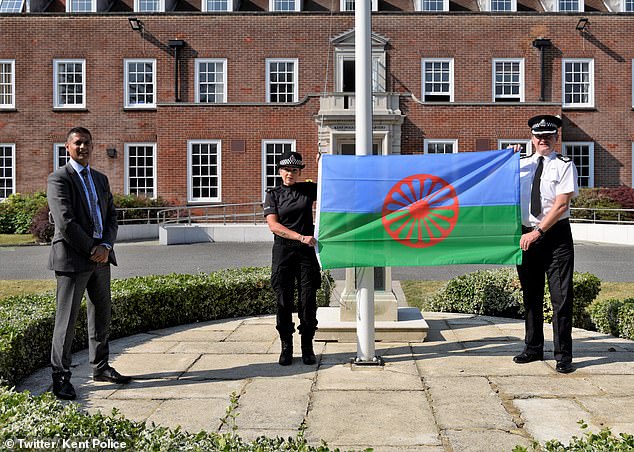 In October a top police officer was criticised for posting a ‘ridiculous’ video on Twitter highlighting ‘International Pronouns Day’.

Julie Cooke, the deputy chief constable of Cheshire police, told her 2,231 followers that the day was important to anyone who identifies as transgender or ‘gender non-conforming’.

In July police in London showed off an extravagant £130,000 hybrid car online, which would never be used for catching criminals.

The eco-friendly BMW i8, was patrolled along the roads near the Met’s headquarters just to prove it was obeying the city’s new Ultra Low Emission Zone.

Chief Superintendent Darren Downs, posted a picture on Twitter and described having a ‘fantastic afternoon at the fair’

It said: ‘We’re marking Gypsy Roma Traveller History month by raising the ‘GRT’ flag’, helping to show our continued support for diverse communities. Kent’s history has a rich Gypsy & Roma heritage & we’ll continue to work with all communities to ensure this is a welcoming county for all.’

Deputy Chief Constable Tony Blaker of Kent Police said: ‘Kent Police employs staff from all strands of society, including people from Gypsy, Roma and Traveller backgrounds, and this flag was flown in response to a request from serving officers in Kent.

‘British policing is by consent and Kent Police seeks to positively engage with all our communities, and in doing so we regularly show our support for other national and international events and religious festivals.’

But by Thursday afternoon over 1,300 had responded, most in disbelief.

Bea Johanssen simply asked ‘When’s Crime-fighting Day?’ while another questioned ‘Is this a joke? We do not pay the police force to support certain groups. They should police without fear nor favour.’

Kent has had problems with travellers in recent years, with communities sitting up illegal sites.

In 2019 the army turned up to turf out families who had rolled up on land in Folkstone, Kent is owned by the MoD.

Of the gas bottle thefts, the police said it had not ascertained who the two men wanted were.

Investigating officer, PC Scott Goddard, said: ‘We have been investigating this incident and are now able to issue a CCTV image of two men we wish to speak to.‘

‘Anybody who recognises one or both of the men is urged to call our appeal line.’