Moment off-duty police worker crashes into pensioner with cancer, 73, while cycling on the pavement as force launches internal probe

An off duty police worker riding his bike on the pavement slammed into a terminally ill pensioner sending him crashing to the ground.

Shocking CCTV of the incident shows the member of police staff riding on the pavement just as the 73-year-old walks out of a shop.

The cyclist is being investigated by the internal Professional Standards Dept.

Video captures the moment John Wilson, 73, slams his head on the floor after being bowled over by the cyclist in Tarring Road, Worthing, last Monday morning.

Passersby rushed to the pensioner’s aid after the collision. 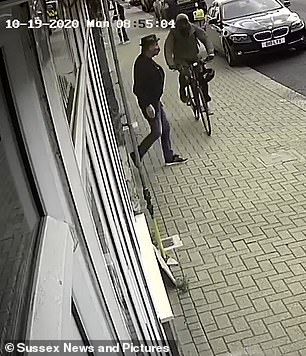 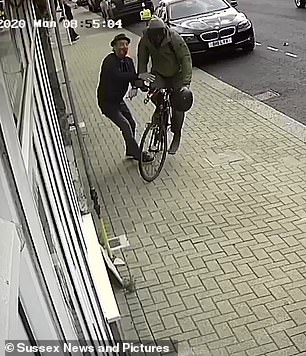 The footage shows Mr Wilson lying on the floor for some time as he is comforted by a white hired woman who strokes his back while addressing the cyclist.

The cyclist, a Brighton-based member of Sussex Police, fell from his bike.

Mr Wilson, who is battling prostate cancer, said he was ‘lucky to be alive’. 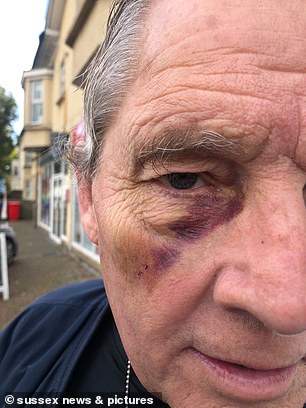 Mr Wilson, 73, who suffers from prostate cancer, was left with facial injuries

He said: ‘I stepped out on to the wide pavement and didn’t see the bike.

‘I was whacked straight in the face, I hit the ground.

‘I’m very annoyed at watching the video as I’m a human being with a terminal illness and I think he thought of me like a piece of dirt. It’s his attitude.

Mr Wilson said that as he lay on the floor waiting for emergency services to take him to hospital, passersby also demanded the cyclist’s name.

He said the man would not give his full name ‘as he worked for Sussex Police’.

The pensioner was taken to hospital with facial injuries and his iPhone was beyond repair.

Sussex Police confirmed the cyclist works for the force. 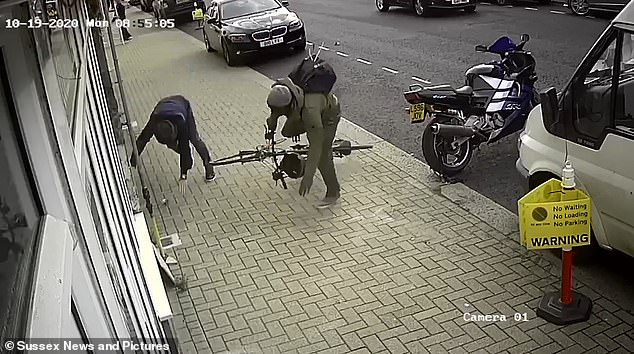 Both men were knocked to the floor after the crash, which was captured on CCTV 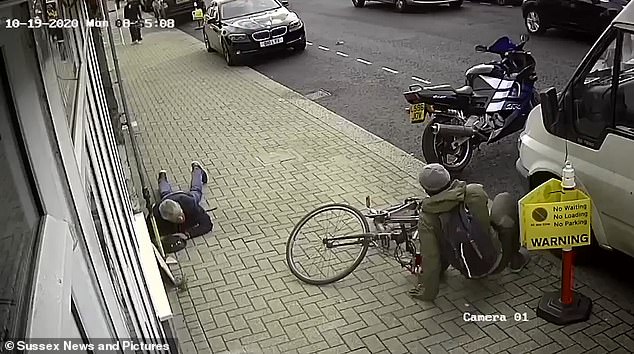 A spokeswoman said: ‘The cyclist, who is a member of staff based in Brighton and was off duty, says he gave his name at the time.

‘The incident has been referred to the Professional Standards Department to investigate any road traffic offences committed and whether there is a need for disciplinary procedures.’

Cyclists must not travel on pavements.

Any cyclist prosecuted for breaking this rule would be held to be in breach of section 72 of the Highways Act 1835. It punishable by a fine from £30 up to £500. 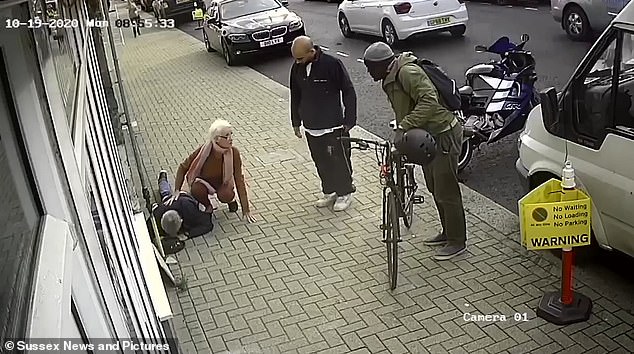 It may also leave the cyclist open to prosecution for careless riding or dangerous riding.

Dangerous cycling is an offence under section 28 of the Road Traffic Act and is a more serious offence than careless and inconsiderate cycling.

The maximum penalty for dangerous cycling is £2,500.

While not in itself a law, the rule is also enshrined in the Highway Code.

Rule 64 of the Highway Code states: ‘You MUST NOT cycle on a pavement.’