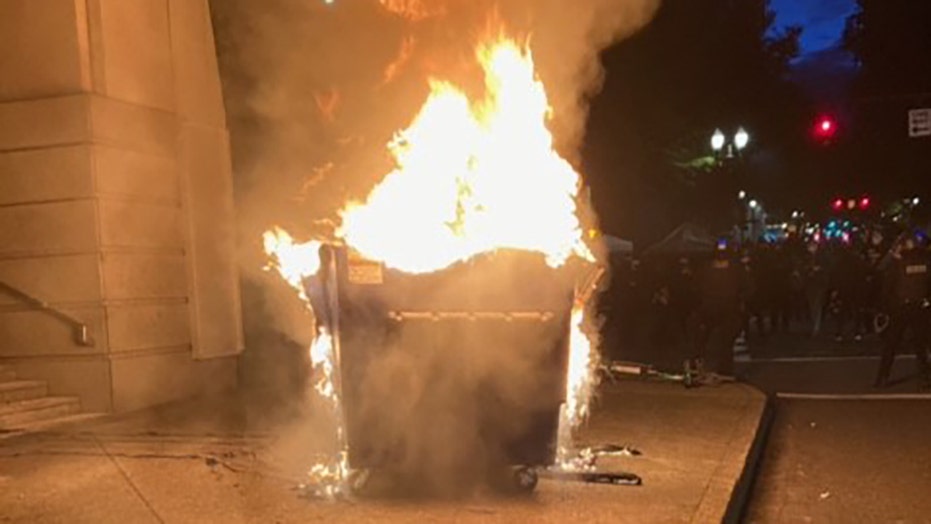 Police in Portland, Oregon, declared a riot Tuesday night, making arrests after rioters smashed windows and threw objects at officers on the one-year anniversary of George Floyd’s death, according to authorities.

A crowd of roughly 200 people – many dressed in black – gathered outside the city’s Multnomah County Justice Center. Some lit a dumpster on fire and tagged the justice center with graffiti, while others yelled, “Burn the building down,” police said.

Some in the crowd also threw frozen water bottles and eggs at officers, along with metal spikes in the road, Portland police said. At one point fireworks were set off, according to a video posted on Twitter by Portland Mercury news editor Alex Zielinski.

An unlawful assembly was declared around 9:25 p.m. local time. Police used a loudspeaker to demand those in the crowd refrain from engaging in criminal activity, including vandalism and arson.

“Warnings have been given to the individuals that if they do so, they are subject to arrest and use of force. This is now an unlawful assembly,” police said.

Later, police said the crowd marched to City Hall and broke windows. Around 10 p.m., a riot was declared, they added.

Marchers later smashed the windows of local businesses, including a Starbucks shop and a Ruth’s Chris Steak House, the Oregonian reported. 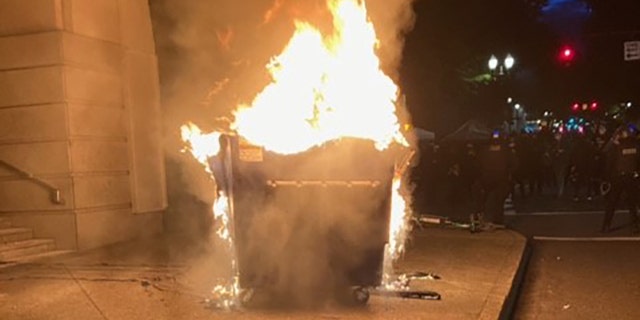 Marchers in Portland on Tuesday lit a dumpster on fire.
(Portland police)

Around 11 p.m., police said targeted arrests were made for some people who “engaged in criminal activity.”

Tuesday marked a year since Floyd died in the custody of Minneapolis police. One officer was convicted of murder in April in connection with the case and three other officers await trial.

The killing of Floyd set off a wave of protests throughout the U.S. last year, with Portland experiencing more than 100 consecutive nights of riots and demonstrations.